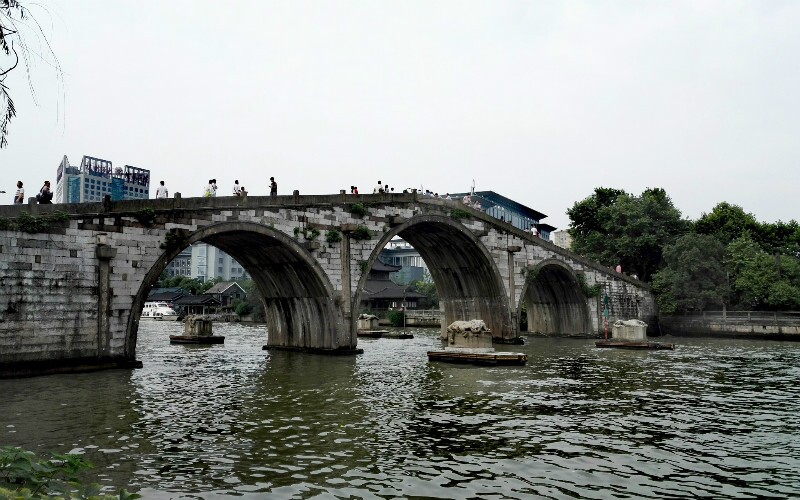 The Sui Dynasty - a Short but Significant Dynasty

The Sui Dynasty (581–618) ruled over much of China, after uniting the four kingdoms of the Northern and Southern Dynasties (420–589). Reminiscent of the Qin Empire, it was a short, intense dynasty, with great conquests and achievements. It's considered with the following Tang Dynasty (618–907) as a great Chinese era.

The Eastern Han Dynasty (25–220) lasted for about 200 years. At its end, the Eastern Han empire split into three warring states. That was called the Three Kingdoms Period.

Then in 376 AD, there were two large empires that divided the region into north and south. Northern Zhou (557–581) was one of the empires in northern China. After the Northern Zhou conquest of Northern Qi, it controlled a big inland region of northern China and the Han Chinese people were ruled by the Xianbei ethnic minority, under the Yuwen family.

One of the generals of the Northern Zhou's army was Yang Zhong, the Duke of Sui.

After Yang Zhong died, his son Yang Jian inherited his father's title, and usurped the throne in 581 by military coup. Yang Jian adopted the title Emperor Wen, and took over the Northern Zhou kingdom, renaming it the Sui Dynasty.

It's very rare that emperors in China have such a lasting effect as Emperor Wen.

Emperor Wen Conquered the Chen Empire and United China in 589

The Chen empire was to the southeast and the big Yangtze River was a natural boundary. It is said that Emperor Wen sent about 500,000 troops across the Yangtze River in 588. In 589, he conquered the Chen empire's capital, Jiankang, which is now called Nanjing.

The fall of Chen united China for the first time in 369 years, and the big Sui empire began!

He made Luoyang his capital and he started to build the Grand Canal to help develop his new capital. However, he didn't finish building it and then died. His son, Yang Guang, continued to work on the Grand Canal and finished it.

Millions were forced to work on it. It is thought that maybe half of the laborers died from the hard labor and bad conditions.

Another of his goals was to conquer Vietnam. He sent an army south in 602 and captured Hanoi. As the army went further south, although it won battles, the troops died from tropical diseases.

Emperor Wen was a Buddhist and tried to spread Buddhism. Mahayana Buddhism had spread and became popular in the region in the various kingdoms since the Eastern Han era (25–220). In the year 601, Emperor Wen passed the edict:

"All the people within the four seas may, without exception, develop enlightenment and together cultivate fortunate karma, bringing it to pass that present existences will lead to happy future lives, that the sustained creation of good causation will carry us one and all up to wondrous enlightenment."

During the Han era, educated Confucian bureaucrats ruled the Western Han empire. Their influence waned in the Eastern Han empire, and they didn't rule in the Northern Zhou state.

Emperor Wen followed the example of the Western Han empire and recruited officers using the imperial examination system, placing Confucian literati into his administration of power.

Emperor Yang ruled for 14 years from 604 to 618, and continued his father's policies of installing a Confucian bureaucracy, starting wars, and carrying out major construction projects. However, he exhausted the empire's resources with these projects, and the people rebelled. He was even more like the First Emperor than his father, and he was also known for expending a lot of money on luxuries.

He commanded that the Great Wall was to be rebuilt. During his reign, millions of laborers were forced to extend a section that stretched into Inner Mongolia.

A major engineering achievement was finishing the construction of much of the Grand Canal from Hangzhou to Beijing. He urged his people to finish it quickly because he wanted to use it to transport resources for his war against Goguryeo.

Although building the canal impoverished his own empire, the relative ease of traveling across it added to the Tang empire's prosperity.

The Grand Canal is the world's longest canal and artificial river. It extended from the merchant city of Hangzhou in the south, across the Yangtze River, and up to Luoyang, which was the capital of the empire.

War Against Goguryeo, an Ancient Kingdom of Korea

He used the Grand Canal to send large armies for his campaigns into the Korean Peninsula to invade Goguryeo. A costly expedition was said to involve about 1.5 million troops and thousands of ships.

Fall of the Sui Dynasty (618) - Harsh Rule Led to Revolts

There was a lot of discontent about the loss of life, the forced labor, and the heavy taxes. Heavy taxation and compulsory labor duties caused widespread revolts and a brief civil war. Emperor Yang was assassinated in 618 by his adviser, Yuwen Huaji.(He had nothing to do with the Yuwen royal family of the Northern Zhou, who his father had usurped.)

In the northern part of the empire, Li Yuan (566–635) and his clan emerged as powerful rulers. After capturing Daxing (now Xi'an), Li Yuan declared himself Emperor Gaozu of the Tang Dynasty in the year 618. (Li Yuan was actually Emperor Yang's cousin. Their mothers were sisters.)

Along with the Qin Dynasty, the Sui Dynasty was one of the two dynasties that had the shortest duration. The Qin Dynasty had ruled much of the same region 800 years beforehand, although their great empire only lasted for 15 years.

Just as the Qin Dynasty did, the Sui Dynasty united China after a period of warring kingdoms, then used the people to carry out huge construction projects and fight large-scale wars to invade other countries. Qin's Great Wall and Sui's Grand Canal ranked among the world's greatest feats of engineering at the time.

Tyranny and huge loss of life led to the fall of both the Qin and Sui in civil rebellions.

However, both Sui and Qin dynasties cleared the way and built the foundation for prosperous and long-lasting dynasties that followed. The Qin Dynasty was replaced by the Han Dynasty (206 BC – 220 AD), and the Sui Dynasty paved the way for the golden age of the Tang Dynasty (618–907).

If you are interested in the Sui Dynasty's history, you can visit the Grand Canal in Hangzhou. See our popular Hangzhou tour below for inspiration: