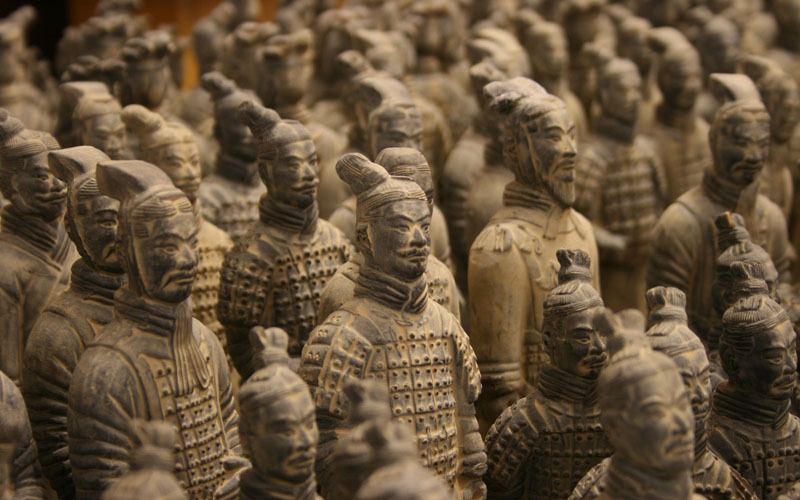 Qin Shi Huang was the first emperor of China. He reunified China by conquering the other 6 warring states in 10 years and then establishing the Qin Dynasty (221–206 BC).

Qin Shi Huang and His Name

Before he became emperor, his name was Ying Zheng or Zhao Zheng. Zheng was his given name. Ying was the name of the tribe to which Qin Shi Huang's ancestors belonged. Zhao was his clan names. Ying Zheng was more often to be called nowadays.

When he became the king of the Qin state, he was called Qin Wang Zheng (the Qin King Zheng).

Qin Shi Huang lived in Zhao until 251 BC when his father was appointed crown prince and was brought back to Qin.

Rumors about the birth of Qin Shi Huang have long been widespread. It is said that Qin Shi Huang’s real father was Lu Buwei, a rich businessman who made friends with Zhuangxiang guided by financial interests.

Lu Buwei finally help Zhuangxiang become the king of Qin and became the prime minister of Qin himself.

Some records say, when Lu Buwei introduced the dancing girl Zhao Ji to Zhuangxiang to please him, she was Lu Buwei's concubine and had already become pregnant.

However, many scholars believed that such records were intended to discredit Qin Shi Huang.

How Did Qin Shi Huang Become the Emperor?

Qin Shi Huang gradually annexed the other six states and became the emperor.

When Qin Shi Huang was 13, his father died, and he became the king of Qin. During a short period of time, his ruling court mobilized Qin for conquests and then started invading the other states of China from 230 to 221 BC.

When Qin Shi Huang was 38 years old, he had unified China, established the Qin Dynasty, and become the “first emperor of China”.

One of Qin Shi Huang’s faults was the burning of books in an attempt to suppress certain thoughts and unify political and intellectual opinions.

The Qin Dynasty had just ended the chaotic Warring States Period. There were still many different ideas and voices in society. In order to strengthen his rule and unify the country, Qin Shi Huang adopted the practice of burning books.  Many history books were destroyed except some books on divination, medicine, and agriculture.

However, according to historical records, Qin Shi Huang had at least 23 sons and 10 daughters, so his “wives” must have numbered more than just Concubine Zheng and Hu Ji.

Many speculated that the lack of records was due to the influence of his mother, who had an indiscreet private life.

When Qin Shi Huang learned of this, he was furious, killed the two children and forced Zhao Ji out of the capital.

In Qin Shi Huang’s later life, he sought immortality earnestly and believed that there would be an elixir of immortality in the place where the immortals lived. Qin Shi Huang sent many people to look for the place, but they didn’t come back.

In addition to sending men to look for medicine, he often traveled to look for it himself. It was during his fifth tour that Qin Shi died when he was 49 years old.

There are two theories about the cause of Qin Shi Huang's death. Some people think Qin Shi Huang had an incurable brain injury caused by a blow to his head when he suffered a seizure during the tour.

Others argue the brain injury would have taken many days to kill him and he could have survived at least two or three weeks. This would have allowed Qin Shi Huang to return to the capital. So, they thought, as Qin Shi Huang intended to pass the throne to Fusu, Huhai killed him for the throne (with a blow to the head).

Still others say he died from ingesting mercury offered to him by his alchemists in his attempts to find an elixir of life.

A panoramic view of the Mausoleum of Qin Shi Huang

The Mausoleum of the First Qin Emperor (in Xi’an) is the first large and well-designed imperial mausoleum in Chinese history. It took 39 years and required more than 700,000 laborers.

The mausoleum is surrounded by a large number of burial pits and tombs, the most famous of which are the Terracotta Army. Thousands of detailed life-size terracotta soldier models represent the guard troops of Qin Shi Huang.

There are many mechanisms in the mausoleum to prevent tomb theft — crossbows shooting from hidden positions, traps, and a large amount of mercury.

Although the emperor's tomb has been dug up several times in the past, many archaeologists believe the core of the tomb where Qin Shi Huang’s remains lie has not been raided. Through exploration, the Chinese Institute of Geological Survey has proved that there are obvious mercury anomalies underground. If it had been stolen, the mercury would have evaporated through the robbers entry point.

Here are our most popular tours that include the Terracotta Army:

Our tours are customizable — tell us your interests and requirements, and we'll help you to design a personalized Xi'an tour.