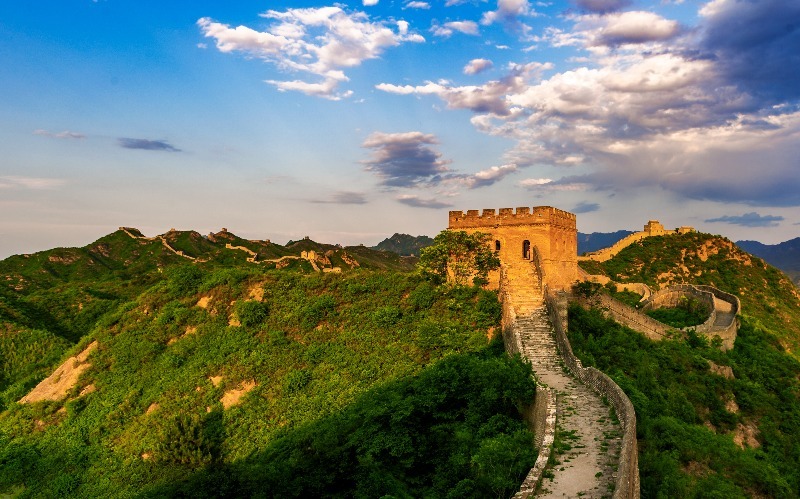 Great Wall of China: Length, History, Map, Why and When Built It

The Great Wall of China is one of the greatest sights in the world — the longest wall in the world, an awe-inspiring feat of ancient defensive architecture. Its winding path over a rugged country and steep mountains take in some great scenery.

Get a thorough intro to the Great Wall of China: length, history, protection, location maps, mind-blowing facts, how, when, who, why built it, and Great Wall travel ...

The Great Wall of China You Want to Know

How Long Is the Great Wall of China?

See more on How Long Is the Great Wall of China >>>

Why Was the Great Wall of China Built?

In the Qin Dynasty, the First Emperor of Qin inked the northern walls to prevent invasion from northern nations. In the Han Dynasty, the emperors extended the Great Wall far into today's western China to protect the Silk Road trade.

Find out more purposes for building the Great Wall >>>

History of the Great Wall of China

During the Spring and Autumn Period (770–476 BC) and the Warring States Period (475–221 BC) when the eastern and central region of what is now China consisted of many small states or princedoms, the princes ordered independent walls be built along state borders to protect their states. The earliest was probably built between the states of Lu and Qi around 650 BC, which later became part of the Chu State Wall.

Qin Shihuang (king of the State of Qin from 247–221 BC) conquered and unified the other states. Emperor Qin Shihuang ordered that the northern sections of walls on state borders, especially the walls in the northern part of China built by the states of Qin, Zhao, and Yan, be joined together to form a unified line of defense against Mongol harassment from the north, the first true Great Wall. Other state border walls became obsolete in a unified China and were subsequently eroded or dismantled.

The northern fortifications were strengthened and lengthened, with sections of wall running parallel for hundreds of kilometers and interlinking along the Inner Mongolian border.

The Han Dynasty Great Wall from the North Korean coast near Pyongyang in the east to Jade Gate Pass (Yumenguan) in the west was the longest the Great Wall has ever been at more than 8,000 km (5,000 miles). The total length included many branching walls, natural barriers, and trenches.

The Yuan Dynasty was the first dynasty in which the whole of China was controlled by a non-Han people, the Mongols. The Great Wall had done a good job of preserving Han China for 1,500 years. The building of the Great Wall, not surprisingly, ceased during the Yuan Dynasty, as China and Mongolia to the north were one.

China flourished during the Ming Dynasty and its military might swelled. The Great Wall was systematically rebuilt in a 100-year project to prevent further northern invasion.

A breach in the Great Wall at Shanhai Pass in 1644 by Manchu forces signaled the end of Han control in China for the last and final Chinese dynasty, the Qing Dynasty (1644–1911). It also signaled the end of construction and maintenance of the Great Wall, until the Badaling section was restored by the government of the Peoples' Republic of China, and opened to the public in 1957 as a tourist attraction.

Our 26 Great Wall maps cover the location, section, and historical maps of the Great Wall.

Who Built the Great Wall and When?

The Great Wall of China has a long history — more than 2,300 years. It was built in different areas by different states/dynasties to protect different territorial borders.

It's often said that the First Emperor of Qin built the Great Wall. Actually, he was not the first to build it.

How Was the Great Wall Built?

The majestic Great Wall was built with wisdom, dedication, blood, sweat, and tears. Families were separated, and many workers died and were interred as part of the Great Wall itself.

Read more on How the Great Wall Was Built — Materials and Methods: See who the workers were, their construction techniques, and how they moved the huge amount of materials.

How Tall Is the Great Wall of China?

The height of the Great Wall is 5–8 meters (16–26 feet), where intact/restored. It was designed to be at least three times the height of a man. Some of the walls were built along ridges, which make them look taller.

The Great Wall of China was not just a wall. It was an integrated military defensive system with watchtowers for surveillance, fortresses for command posts and logistics, beacon towers for communications, etc.

In the Ming Dynasty (1368–1644), the Great Wall was reconstructed to be stronger and more sophisticated, due to better construction techniques being developed.

A watchtower at the Great Wall

Read more about How was the Great Wall of China defended >>>

Present Condition — 30%+ of the Great Wall Is Gone

Present Condition of the Great Wall

Due to natural erosion and human damage, about 2,000 kilometers, or 30% of the Ming Great Wall have disappeared. (Far more of previous dynasties' Great Wall sections is gone.)

Restoration and Protection of the Great Wall

To prevent further loss of the Great Wall, the Chinese Government has taken measures to protect it:

As individuals, we can do the following to protect the Great Wall:

The Great Wall is a China icon. It shows us not only China's culture of national pride, grand projects, and determined resistance, but also China's extravagant architecture and creativity.

During the construction of the Great Wall, there were many interesting legends and myths, such as Meng Jiangnv weeping over the Great Wall, a sad but romantic love story set in the Qin Dynasty.

The Great Wall of China is a must-visit China attraction. Perhaps the most powerful advertising words in history come from the poetic pen of Chairman Mao: "Until you reach the Great Wall, you're no hero." Figuratively this has come to mean 'to get over difficulties before reaching a goal'.

Why You Should Visit the Great Wall

"Greatest Human Feat in History": The Great Wall is the building project with the longest duration and greatest cost in human lives, blood, sweat, and tears. It deserves its place among "the New Seven Wonders of the World" and the UNESCO World Heritage Sites.

Over 500 World VIPs Have Visited the Great Wall!

Over the years, many national leaders and celebrities have been to the Great Wall...

Most Popular Sections Around Beijing

We would rank Beijing's nearby Great Wall sections as follows, according to our customers' feedback and our own personal experience:

However, we recognize your individual choice will be based on your own personal interests and requirements. See our Great Wall sections comparison for more information on your choice.

More Articles Related to the Great Wall of China

Discover the Great Wall with Us

Not quite what you were looking for? No problem. See more of our Great Wall hiking tours. You can have us tailor-make your own Great Wall tour by telling us your interests and requirements.