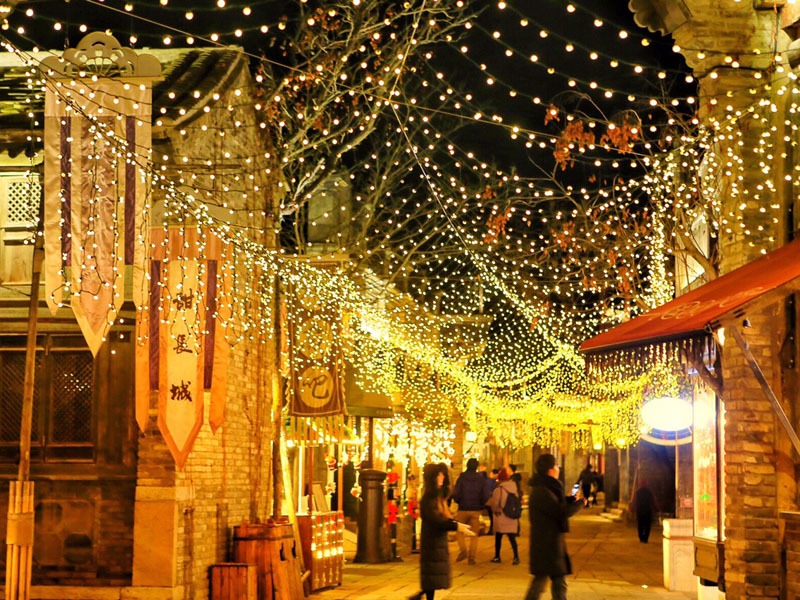 The Chinese New Year holiday is the best time of the year to experience traditional Chinese culture. People generally have at least three days off, and they use the time to take part in some generations-old traditions.

To help you choose the best places to experience Chinese New Year, here are four of the biggest celebrations in China: Beijing has temple fairs, Guangzhou has flower fairs, Hong Kong has large extravaganzas, and Harbin has its Ice and Snow Festival.

As the capital of China, Beijing is a city combining tradition and modern prosperity. Temple fairs have been a part of daily life in Beijing for hundreds of years. They are one of the most important celebrations of Chinese New Year.

Below are the two most recommended temple fairs in Beijing.

Ditan Temple Fair is one of the biggest and most popular temple fairs, featuring traditional snacks, handicrafts, a variety of performances, hundreds of stalls selling local snacks, antiques and curios and a whole lot of people.

Dongyue Temple Fair is one of the oldest temple fairs in Beijing, dating back to Yuan Dynasty (1279–1368), featuring the exhibition of fu (福 ‘good fortune') culture. A variety of ornaments can be seen inside and outside the temple that carry the Chinese character "福".

The Pearl River and Canton Tower

Modern: It is one of China's richest and most modern cities.

The big southern city of Guangzhou is sometimes billed "Flower City" in China for its blooming gardens all year round. Guangzhou is known for its flower fairs held annually during the Spring Festival.

The flower fairs usually start three days ahead of the Spring Festival, and they climax on New Year's Eve. During the fair, streets of the city are decorated with fragrant and beautiful fresh flowers, and miniature landscapes.

There will be various folk performances, and local artists also demonstrate and sell their paintings and calligraphy works in the fairs.

Flower fairs have been regularly held since 1920 and their size have been growing ever since. The major flower fairs in Guangzhou are…

In Hong Kong, the Spring Festival is the biggest holiday, and people celebrate differently than in the Chinese mainland. People mark the occasion with a unique fusion of modern fun and ancient customs. The three days of Spring Festival events often make it to the top of the lists of world festival events.

On the evening of Chinese New Year's Day, there is a carnival-like night parade and international Spring Festival entertainment with performing groups from many countries. After the parade, you can hang out and have fun in the streets afterwards.

Victoria Harbor is the site of the magnificent fireworks display on the second day of the Spring Fest.

The most popular races of all...

About 100,000 excited fans will crowd into Sha Tin Racecourse on the third day of the Spring Festival holidays. There is a full program of traditional and colorful festivities, and profits are donated to charities.

Chinese New Year in Macau is definitely upstaged by its larger neighboring Special Administrative Region, HK, but if you want more of a relaxed Mediterranean feel to your CNY with casinos, then head to Macau.

Huge ice sculptures displayed during the ice festival in Harbin

Harbin is the most popular winter destination for winter activities among Chinese, expats in China, and foreign tourists. Harbin's bone-chilling winters provide the proper climate for the city's most prominent claim to fame.

The festival lasts more than a month. It is comprised of two big events: an Ice Lantern Festival  where ice cities sprout up every winter and a snow sculpture festival (Jan-Feb).

There many ski resorts in Harbin, of which Yabuli Ski Resort and Jihua Ski Resort are the most recommended destinations for skiing.

Want to have a China tour during Chinese New Year? China Highlights can offer you assistance. We can tailor-make a special trip just for you.

You can have a look at our most popular China tours:

1. Is it possible to travel in China during Chinese New Year?

Travel to China is possible over Chinese New Year as long as you are well-prepared. Be prepared to see big crowds in the streets, restaurants, trains and train stations. Travel bookings, especially for trains, are extremely tight, and hotels generally increase their rates. Read details on Chinese Spring Festival travel.

2. Will everything be closed over Chinese New Year?

Tourist-related enterprises open as usual, even though government buildings and offices are closed during the New Year holiday. Restaurants, tourist attractions, hotels, airports, and department stores will be open and ready for more customers.

3. Do I need to bring some small gifts for my guide during the New Year? If so what are the best options?

Gifts from tourists to tour guides are not expected. But your tour guides will appreciate it if you do bring a surprise for them. A pair of warm gloves, a warm scarf, or a box of candy is recommended.

The amount of lucky money varies according to the recipient and the relationship between the giver and the recipient. Bosses gifts to employees and parents gifts to children usually range from 100 to 500 yuan or even more.