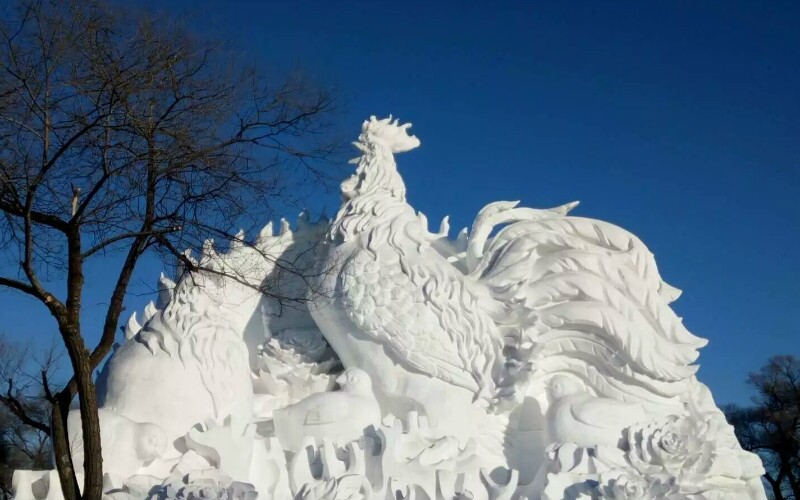 When winter comes, Harbin turns into a kingdom of ice and snow. The most anticipated event in Harbin in winter is the annual Ice and Snow Sculpture Festival. Officially, the opening ceremony of the festival is on January 5 and the festival lasts till late February. However, exhibits often open earlier.

If you are planning a Harbin tour and want to get more accurate information, please contact us. We will update the page when the exact information is announced.

There are three main exhibition areas: In general, each of the three venues have different ticket prices and opening hours.

The Ice and Snow World — A Colorful Ice “Disneyland”

THE ICE AND SNOW WORLD

The Ice and Snow World is the most popular place to enjoy the Harbin Ice and Snow Festival. It displays ice sculptures of huge proportions, such as palace buildings. Many are ice-work recreations of real buildings or things around the world. You can even walk on them or into them.

It is best visited when the sculptures are colorfully lit at night. The dazzling colors and light effects, along with lots of amusements such as slides and an ice maze, make the festival the most entertaining ice festival in the world. Square miles of giant snow sculptures made by artists from all over the world are displayed there. Unlike the better-known ice sculptures, these are not lit up at night and are best seen in sunlight.

More than 1,000 ice lantern sculptures are displayed such as internally illuminated ice lanterns, magical figures, and animals that are loved by children. It is mostly an ice world focused on kids. There are interesting activities that kids may enjoy such as ice slides.

Visitors can queue at the venues to buy tickets or book online.

Our One-Day Ice and Snow Fairyland Tour will manage the ticket booking for you and enable you to explore the main sites of the Ice and Snow Festival in a hassle-free way, including:

There will be long queues on weekends, Christmas Eve/Day, New Year's Eve and New Year's Day. If you want to enjoy less waiting time, you can book a private tour with us. Then you can use the travel agency entrance! How to Get to Harbin International Ice and Snow Festival

There are plentiful flights to Harbin from major cities such as Beijing (2 hours), Shanghai (3 hours), Hangzhou (3 hours), Guangzhou (4 hours), and Shenzhen (5½ hours). From nearby cities, such as Changchun, it takes about 1½ hours by bullet train.

Getting to the Ice and Snow World

Getting to Sun Island

Getting to Zhaolin Park Sub-Zero Clothing: In Harbin in winter, the temperature is from -25°C (-13°F) to -10°C (14°F), and that's without wind chill! Hence thermal underwear, gloves, (scarves, earmuffs), hats, (face masks), and thick arctic clothing and boots are necessary. If you have ski boots, they would be ideal.

Drink plenty of fluids: Despite the cold it is very dry in Harbin (average humidity 2%).

Frostbite prevention: If your hands or feet start feeling chilled, do some exercise to warm them up or go indoors. If your hands, feet, ears, nose, or other extremities lose feeling due to the cold, don't toast them or wash them with hot water. Ideally retreat to a warmer indoor environment and rub them vigorously to restore circulation slowly.

Protect your camera batteries and mobile phones: The average January high in Harbin is -13°C (8°F). The cold saps battery life and could make your mobile phone shutdown.

Usually a fully charged camera battery will last for 50 photos (without flash), but in these cold conditions around 25 is good. If you take the battery out and warm it for a while, you may be able to take another ten. You can try repeating this action.

It is also recommended that you keep your camera and mobile phones inside your down jacket when not use it. If you want to take lots of photos prepare more batteries for your camera and keep them warm.

1. How do artists in Harbin make ice sculptures?

First, workers obtain the materials — ice blocks from Songhua River. Then these ice blocks are transported to the venue. The ice blocks are stuck together to form large shapes of the desired dimensions. Then the artists use tools, such as shovels and saws to cut, polish, and shape the ice sculptures that are finally presented to visitors.

2. Do the ice sculptures ever melt in Harbin?

Winter in Harbin is extremely cold. The temperature stays well below 0°C (32°F) for the three months of the Ice and Snow Festival, so the ice sculptures will not melt until March or April when the weather gradually warms up.

3. What will happen to the ice sculptures after the festival?

For some small ice sculptures, it is safe to let them melt naturally. Some large ice sculptures that are dangerous when collapsing during the melting process are dismantled by construction demolition methods, e.g. implosion blasting or excavator and breaker.

4. Why is Harbin International Ice and Snow festival celebrated?

In the 1980s, ice lanterns in Harbin became famous all over the world, after Harbin's traditional ice lantern show re-continued following the Cultural Revolution.

At that time, when receiving Hong Kong, Macao, and Taiwan compatriots who came to Harbin to enjoy the ice lanterns, the Propaganda Department of Harbin found that visitors not only loved ice lanterns, but were also are interested in snow.

If you are planning a Harbin tour, please see our recommended customizable tour plans below for inspiration:

Or contact us if you have any questions or other requirements.