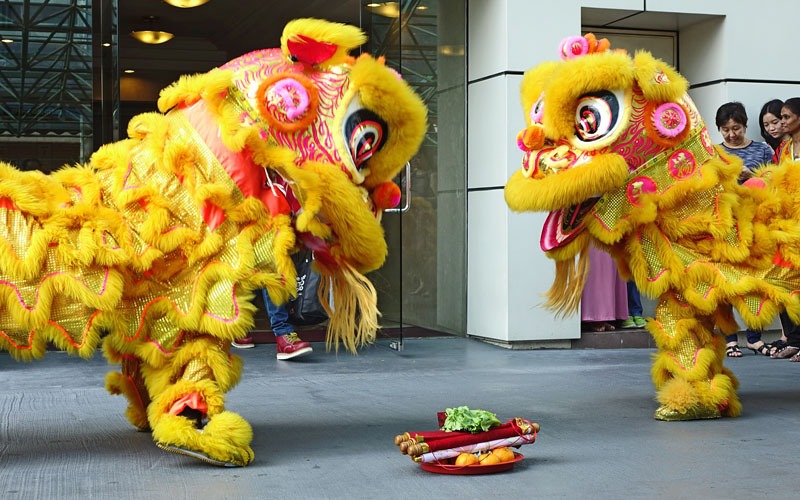 Chinese Lion Dances: What Is It and What Does It Symbolize?

The lion dance is a traditional Chinese dance performed on big occasions, such as the Spring Festival (Chinese New Year) for good luck, as it is believed that the lion is an auspicious animal.

The lion dance is one of the most important traditions at Chinese New Year. It is performed to bring prosperity and good luck for the upcoming year. The lion dance is also a way to create a festive atmosphere and bring happiness.

Chinese lion dances are performed by two "dancers" in a lion costume, rather like a pantomime horse. The performers become the body of the lion: the one in front is the head and front limbs, the one behind is the back and hind legs. Performers' legs are dressed the same color as the lion's body, and sometimes the costume extends to shoes the shape and color of the lion's paws.

The lion head is usually over-sized and dragon-like, like many stone lions in China.

Performed in a lion costume, accompanied by the music of beating drums, clashing cymbals, and resounding gongs, lion dances imitate a lion's various movements or demonstrate martial arts agility, depending on the style.

Though lion dances all use similar costumes, during their long development, the lion dances are divided into two styles: southern and northern.

The southern lion dance originated in Guangdong, and it is the style popular in Hong Kong, Macau, and the hometowns of overseas Chinese.

The southern lion dance is a performance based on the study of a lion's behavior, with an emphasis on actions like scratching, shaking of the body, and licking of fur.

Performances are vivid and entertaining, even comical. There are also skillful performances, such as playing with a ball, which includes swallowing it.

In the adult lion dance, the performer in front holding the lion's head is often lifted by the other to make the lion stand up. Northern lion dances are more gymnastic, involving rolling, wrestling, leaping, jumping, climbing, or kowtowing.

The best places to see northern Chinese lion dances are China's martial arts theaters, like the Red Theater in Beijing, or even at the Shaolin Temple.

The Origin and History of Lion Dances

Opinions about the origin of the Chinese lion dance are widely divided. The most reliable one is this:

In traditional Chinese culture, the lion, like the Chinese dragon, was only an animal that existed in myth, and there were no actual lions in China. Before the Han Dynasty (202 BC–220 AD), only a few lions had reached the Central Plains from the western area of ancient China (now Xinjiang), due to the Silk Road trade.

At that time, people mimicked the appearance and actions of the newly arrived lions in a performance, which developed into the lion dance in the Three Kingdoms Period (220–280) and then became popular with the rise of Buddhism in the Northern and Southern Dynasties (420–589). In the Tang Dynasty (618–907), the lion dance was one of the court dances.

After that lion dances continued to become a popular performance among the people, to pray for good luck during the Spring Festival or during other celebrations.

The lion dance is an excellent example of Chinese folk culture, which has spread across the world with Chinese immigration. Overseas Chinese in Europe, America, etc. have established many lion dance clubs, performing on Chinese festivals or big occasions, particularly Chinese New Year.