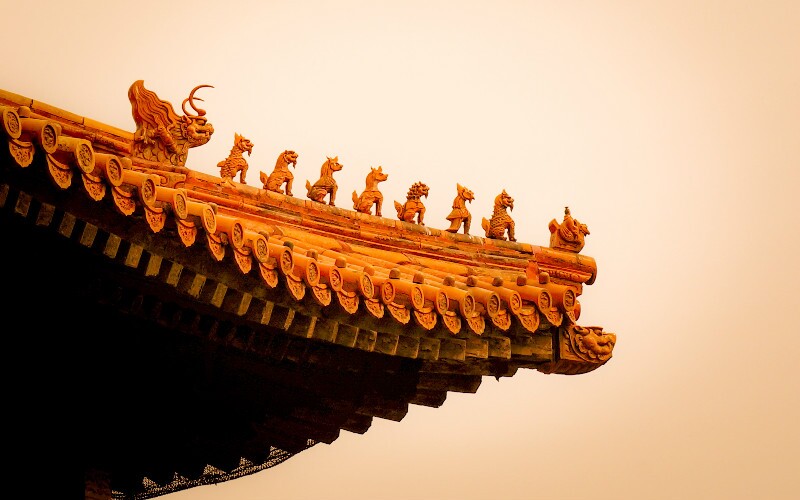 Chinese dragons are powerful and benevolent symbols in Chinese culture, with supposed control over watery phenomenon, e.g. summoning rain during a drought. Dragons are everywhere in China — in legends, festivals, astrology, art, names, and idioms.

Dragons are seen as lucky and good — quite different to the evil, dangerous, fire-breathing dragons of most Western stories.

What Do Chinese Dragons Symbolize?

The Dragon is one of the 12 Chinese zodiac animals, with its own astrological personality and symbolism. Apart from that, in Chinese culture, dragons symbolize imperial power, good fortune, power over weather and water, and a pioneering spirit.

During China’s imperial dynasties, emperors used the dragon as a symbol of their imperial power and authority. Dragon emblems can be found in carvings on the stairs, walkways, furniture, and clothes of the imperial palace. It was against the law for common people to use things related to dragons in imperial times.

Ruler of Weather and Water

In many Chinese villages, there are still some temples or shrines to worship the Dragon Kings to seek their blessings of good weather for harvests and all year round. In pre-modern times, local people offered sacrifices to appease the Dragon Kings to stop flooding or droughts.

Ancestor of the Chinese People

It was said that thousands of years ago, Yandi (a legendary tribal leader) was born through his mother's telepathic interaction with a mighty dragon. With the help of the dragon and allied with Huangdi (a legendary tribal leader and, by some accounts, the grandson of a dragon), they opened the prelude to Chinese civilization. So, “emperors” Yandi and Huangdi were the ancestors of the Chinese people. It is said that the two emperors were immortalized as dragons before they ascended to heaven.

As time went by, Chinese people began to refer to themselves as ‘the descendants of Yandi and Huangdi’, as well as ‘descendants of dragons’.

In ancient China’s legends, Shennong the ‘Divine Farmer’ was the son of a dragon and a beautiful princess, and some say the father of Huangdi (the Yellow Emperor). He taught people to develop agriculture and to use herbal drugs. Shennong was considered as a primogenitor of the Chinese people and hero of ancient China. So, the dragon is considered to bring good fortune, harvest, and prosperity.

An 'Unrelenting and Pioneering' Spirit

The Chinese dragon has been transformed from an imaginary progenitor to a mascot from ancient times to the present. It represents the Chinese people's unrelenting and pioneering spirit of keeping pace with the times.

Not only has the Chinese dragon prevailed in China, but it's also very popular among Chinese people living overseas. It has become a symbol of China and Chinese culture.

What Do the Colors of Chinese Dragons Mean?

Red is China’s luckiest color. It is often used to decorate the house/building used for a wedding or festival. The red dragon therefore has lucky symbolism. People paint red dragons to decorate their houses or walkways to celebrate various festivals. It is a tradition to use red dragons for dragon dances.

Black Chinese dragons are often related to vengeance. In some Chinese movies, many criminal organizations or street gangs use black dragons as their emblems. Criminals often have black dragon tattoos on their arms or back, which represent evil or revenge. In ancient China, the black dragon is often linked to catastrophes like storms and floods.

White is traditionally connected to death and mourning in Chinese culture. However, a white Chinese dragon symbolizes purity and virtue.

Since ancient imperial dynasties, yellow has been regarded as the royal color. Yellow dragons were a symbol of the emperor. They represented wisdom, good fortune, and power.

Types of the Chinese Dragon

The green dragon is also called the azure dragon. It is one of the four great beasts in Chinese mythology (the Black Tortoise, Vermilion Bird, White Tiger, and Azure Dragon) representing the four directions (north, south, west, and east) respectively. The green dragon represents the east and controls rain and wind.

Different Types of Dragons on the Roof of Forbidden City

The horned dragon, according to Chinese legend, is a dragon that has lived more than 500 years, and at that age developed horns. It is a powerful and evil dragon that often makes floods.

The underworld dragon is said to live in the seas, rivers, lakes, or underground. It can control the flow of rivers or streams.

The treasure dragon, it is said, can protect hidden treasures or personal wealth.

The cloud dragon, according to legends, lives in the cloud. It can fly through thick cloud and make rain. It is also a popular dragon that Chinese painters like to paint.

The dragon king, or old dragon, is the most powerful and intelligent Chinese dragon in China’s mythology. It can change into different shapes, even human beings’. It is said that it can control all the seas of China in all directions.

The 9 Sons of the Chinese Dragon

According to Chinese myths, the dragon has nine sons with different characters, and their images are widely used in architectural decoration, especially in the imperial palaces. The nine sons are often used in buildings' decorations and sculptures.

Images of 9 sons of Chinese dragon

Names of the 9 Types of Dragons in China

In ancient China, people lived mainly on agriculture. The rain and wind played an important role in people’s lives. They believed there was something powerful controlling the rain and thunder. And, in Chinese mythology, the dragon was such a powerful beast that lived in rivers, lakes, and seas. The dragon was used as a symbol of great power, a ruler even of the emperor.

According to the Chinese legend, the Yellow Emperor (Huangdi, a legendary tribal leader) launched a series of wars against nine tribes in the Yellow River Valley and incorporated the other tribes' totems into his dragon totem after defeating them.

Dragons play an important role in Chinese culture, such as the zodiac, dragon dances, idioms, art, the dragon boat festival, festival decorations, films, legends, and literature. You can always find dragon elements whenever you are learning about Chinese culture.

Years of the Dragon Zodiac

Babies born in a year of the Dragon are believed to be lucky, wealthy, and successful. Because of its auspicious connotations, the dragon is the favorite sign with Chinese parents who prefer to give birth to their babies in a year of the Dragon. According to public data, the number of children born in Dragon years is much larger than in other zodiac years.

The dragon dance is an important cultural performance used to celebrate festivals in China. It is also a symbol of Chinese culture.

In ancient times, when there was no rain for a long time, people prayed for rain with a dragon dance, and dragon dances after planting were also a way to pray against insect attacks. Nowadays, dragon dances are performed during festive occasions to chase away evil spirits and welcome in prosperous times.

Chinese people believed a dragon-like boat would scare away evil spirits. People celebrate the Dragon Boat Festival to commemorate the death of Qu Yuan, a Chinese poet who was known for his patriotism and contributions to Chinese classical poetry.

According to the Chinese legend, Qu Yuan drowned in the Miluo River to show his protest and despair at the corruption of the local government. To save Qu Yuan from the river, local people took their dragon-like boats to search for him, but in vain. The shipmen beat drums, splashed the river water with paddles, and threw dumplings into the river to keep the fish and evil spirits away from his body.

Since then, the ritual search for Qu Yuan’s body has become the dragon boat race. Now, dragon boat races are one of the activities of the Dragon Boat Festival celebrations. The boats are made in the form of a traditional Chinese dragons, which are often painted colorfully.

Feng shui is Chinese geomancy. In feng shui, the dragon is an earth element representative. It is also one of the Four Great Animals of China’s four directions, representing east, where the sun rises.

In feng shui, the dragon is the best yang (masculine) token. People in need of yang aspects in their feng shui balance are recommended to get more dragon elements, such as wearing dragon amulets, and adding some dragon symbols. Read more about Feng Shui.

Because the Chinese dragon represents great power and good fortune, there are many idioms related to dragons that are used to express good wishes and fine sentiments. Here are some of the most used ones:

望子成龙 (wàng zǐ chéng lóng): ‘To wish your son becomes a dragon’ refers to parents hoping for their kids to be successful.

Dragons are the favorite Chinese mythological creatures that are used as elements in decorations of buildings, costumes, paintings, and carvings.

Dragons in carvings or paintings are used to decorate buildings, particularly imperial ones. The Chinese dragon symbolized the sovereignty of emperors, and everything related to dragons was exclusively used for emperors’ property in China’s feudal times. When you are in the Forbidden City, you can see Chinese dragon elements nearly everywhere: the nine sons of the dragon on the golden roofs, on the stone floors, the imperial chair decorations, wood sculptures on pillars, and handrails, etc.

There are many Chinese opera shows with "Dragon" in the title. Also, you can see dragons on imperial robes in an opera show when there are roles depicting an imperial family.

There are many differences between Western dragons and Chinese dragons.

Homes: Unlike Chinese dragons, Western dragons often live in lairs or caves in mountains, while Chinese dragons live at the bottoms of lakes and rivers, and in cloudy skies.

Appearance: Western dragons have large bat-like wings and big claws and most Western dragons look like carnivorous dinosaurs with wings, while Chinese dragons, though also dinosaur-size or larger, have elements of many different animals and in general look long and snake-like.

Character: Western dragons are depicted as dangerous creatures and symbols of evil (usually), while Chinese dragons, by contrast, are believed to be friendly, auspicious, and lucky (usually) — symbols of great power, good fortune, wisdom, and health.

The best way to explore China's dragon culture is to visit the country, and learn about the culture, with a local expert.  We are in China, and we are able to arrange a culture tour for you with a local knowledgeable guide.