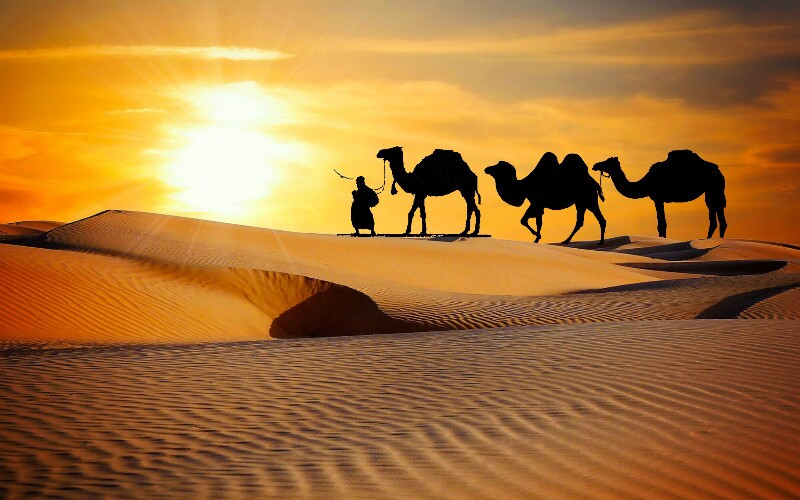 The Silk Road trade route was recognized about 2,100 years ago in China for its trade and travel from China's Han Empire to Central Asia and Europe, and it revolutionized the world until it declined during the Ming Dynasty (1368–1644).

What Was China's Silk Road?

The Silk Road was an ancient trade and communication route across the Eurasian continent, formally recognized in China during the reign of Emperor Wu (157–87 BC) of the Han Dynasty. It linked China with many regions of the Old World in commerce between 119 BC and around 1400 AD.

Why Is It Called the Silk Road?

China is the “hometown of silk”, and silk was the most representative of the goods exported by China on the Silk Road.

At the end of the 19th century, German geographer and traveler Ferdinand von Richthofen called the Silk Road routes die Seidenstrasse (‘the Silk Road’) or Seidenstrassen (‘silk roads’) in his book ‘China’. The term was quickly accepted by academics and the public, and “Silk Road” was formally accepted as a proper noun.

Where Did the Silk Road Start and End?

In 119 BC, the Silk Road started from Chang’an (now called Xi'an), China’s ancient capital, which was moved further east (and with it the Silk Road’s start) to Luoyang during the Later Han Dynasty (25–220 AD). The Silk Road ended in Rome.

Which Countries Did the Silk Road Go through?

Starting from ancient China, the northern Silk Road bifurcated through the five Central Asian countries (the Stans), and continued through Afghanistan, Iran, Iraq, and Turkey, then to Greece and Italy across the Mediterranean Sea.

The Silk Road was not a single thoroughfare.

The main northern route went from Xi'an/Luoyang through the Gansu Corridor to Dunhuang with two or three trails crossing the desert to Kashgar, then across Central Asia to Europe.

The southwestern Silk Road route (the Tea Horse Road) went from Yunnan and Sichuan through Tibet to India, and the Maritime Silk Road went via sea/ocean via SE Asia and India to the Middle East, Africa, and Europe.

Why Was the Silk Road Important?

Trade and travel between East and West caused revolutionary changes in everything from culture, religion, and technology to the emergence of huge empires and the disappearance of many small tribes, kingdoms, and empires.

The inventions of paper and gunpowder in China were so powerful that when the technology reached Europe, it enabled the Renaissance, the Protestant Reformation, and the scientific and industrial revolutions that transformed the world.

Paper enabled rapid publication, and gunpowder weapons changed warfare and enabled the destruction of older empires and the emergence of new nations.

Plagues spread and destroyed half the populations of large regions of Eurasia and new crops and technologies allowed the population in Eurasia to grow rapidly.

The Mongol invasions on the Silk Road routes imprinted Mongol ethnicity and language from Xinjiang to Eastern Europe.

Two of China's major religions, Buddhism and Islam, were introduced mainly via the Silk Road.

What Was Traded on the Silk Road?

The Han Empire initially wanted big central Asian horses for their cavalry. Initially, they mainly traded silk, but later paper and porcelain were also exported in exchange for precious metals, glassware, woolen articles, and other products all the way from Europe and Egypt.

How Did the Silk Road Come into Being?

Unfortunately, Zhang Qian was captured on the way and kept as a prisoner for several years by the Huns.

Eventually he took the opportunity to escape and, with the help of the Dayuan Kingdom (大宛国) of today’s Fergana Valley, finally arrived in Dayuezhi.

In 126 BC, Zhang Qian returned to Chang’an and told the emperor about the exotic things he had seen along the way.

In 119 BC, Zhang Qian set out again. He traveled along the Silk Road with large quantities of silk, jade, and lacquerware and traded with the countries along the route.

These countries also sent envoys to the Han Dynasty. From then on, driven by the Silk Road, trade and cultural exchanges became more and more frequent.

When Did the Silk Road Come to an End?

The Silk Road trade continued over a roughly 1,500-year period. Trade grew and reached a height when the Mongols had control of Eurasia from China’s Yuan Empire (1279–1368) to Eastern Europe.

The fall of the Yuan Empire and increased Ming Dynasty (1368–1644) isolationism, the growth of silk production in Europe and elsewhere, and the growth of maritime trade effectively ended Silk Road trading in the 1400s.

Into the historical context of the Silk Road, a new Silk Road is coming into being. In 2013, China launched the Belt and Road (the Silk Road Economic Belt and 21st-Century Maritime Silk Road) Initiative (BRI). It focuses on the goal of promoting mutual development and prosperity.

New trans-Asia transportation infrastructure: Substantial progress has already been made. The first freight trains from Europe to China began running in 2011 and have cut transit time from Germany to China from 50 days by sea to 18 days.

In 2018, a major 5,400-kilometer highway to St. Petersburg from the Yellow Sea was opened that allows vehicles to travel the distance in 10 days. This is a new travel option for economical tourism and sightseeing along Silk Road places.

The Silk Road has become a popular route for tourism. In Xinjiang and along the entire Silk Road from Xi'an to Kashgar and Altay in Xinjiang to Greece and Albania, Silk Road tourism is booming. Multi-country trips tracing the Silk Road route are becoming popular among both Chinese and Westerners.

Explore the Silk Road with Us

Silk Road travel is a rich cultural journey into the heart of China. A personal experience is much more interesting and profound than what you read about in an article. See our recommended Silk Road tours for inspiration:

All our tours are customizable. Contact us to create a trip according to your group size, time, budget, interests, and other requirements.