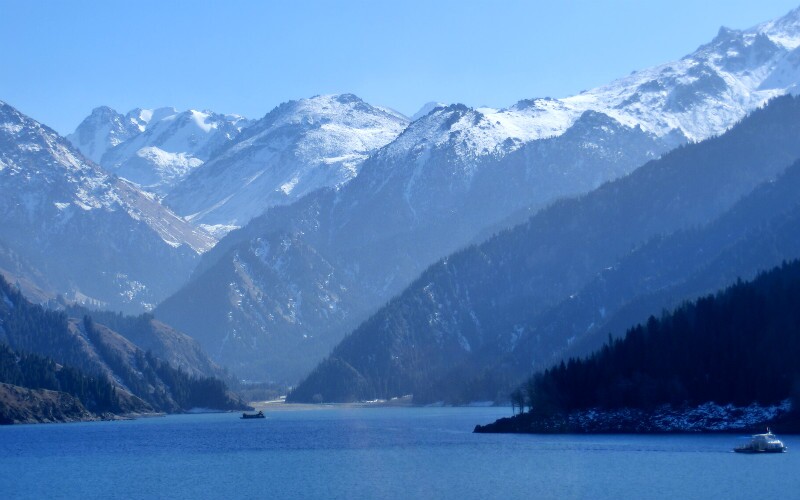 October provides the last chance to enjoy the sweeping green slopes of Nanshan Pasture with its Kazakh yurts before winter sets in.

Weather: October in Urumqi is cool and fresh, with fall colors in the mountains, parks, and countryside.

Clothing: All hotels and restaurants in Urumqi have central heating. Dress in layers for the cold, but variable conditions. Given the large temperature changes at the change of season, beware colds and stay warm when outdoors.

Pollution: The Air Quality Index has been averaged at 69 in Urumqi in October, which is "good" for China cities.

Things to Do in Urumqi in October

October is a good month for outdoor activity in the city, as pollution is fairly low and temperatures are cool.

View Urumqi from the pagoda on Red Hill.

Red Hill is a steep red rock in the middle of Urumqi. There are amusement rides in the leafy park, and it is a popular place for photography.

In October, the scenery changes with fall hues and the first flurries of snow. You can experience Kazakh local life on the grassy slopes, as they tend their flocks of animals on Southern Mountain (Nanshan) Pasture.

You can also enjoy fresh fall air, fine mountain views, and Kazakh culture in the Heavenly Mountains around Heavenly Lake. However, note that this area will be particularly busy, and probably best avoided in the first week of October.

The last of the tourist crowds flock to Heavenly Lake in October before winter sets in.

October is the end of the tourist season in Urumqi. After October's first week, top attractions like Heavenly Lake are not as crowded as they can be in summer/early-fall. We recommend you avoid the National Day week, however...

The golden-week National Day holiday (October 1–7) brings brings huge numbers of tourists from all over China. Numerous activities are organized to attract the crowds, which may however affect your enjoyment of some attractions. Book your hotel rooms early if you come in this peak tourism week.

End of the High Travel Season

After the first part of October, tourist crowds shouldn't be a bother, and prices for Urumqi flights or train tickets, and hotel room prices, will go down compared to summer. We can help you arrange these, and other things on your China wish list, your way.