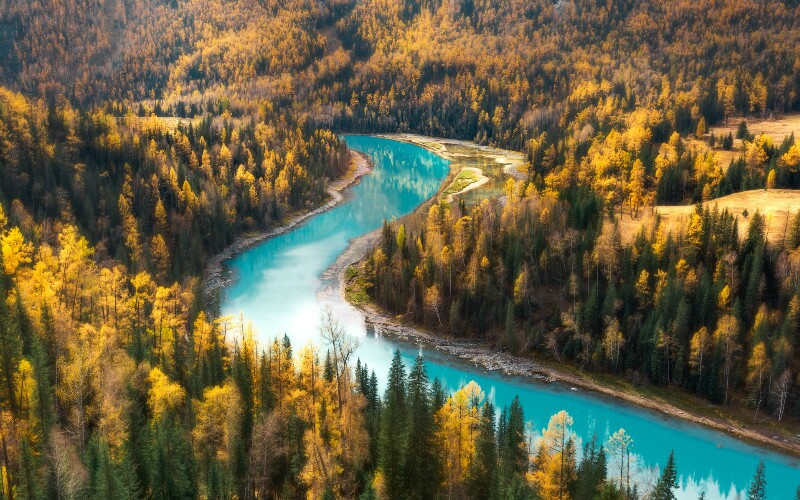 Xinjiang Travel Guide - How to Plan a Trip to Xinjiang

Xinjiang province has been important in Chinese history as a Silk Road gateway to the West. It was the westernmost territory of several big empires.

The Silk Road connected the ancient Chinese, Indian, Persian and Arab cultures with those of ancient Greece and Rome. It promoted exchanges between Eastern and Western civilizations.

The Silk Road started from China's ancient capital Chang'an (present-day Xi 'an) in the east and led to the eastern shores of the Mediterranean Sea in the west. Half of China’s ancient Silk Road is in Xinjiang.

Along the Silk Road in Xinjiang, there were many fortified settlements, castles, grotto temples, tombs, and beacon towers. The best-preserved sites are the Gaochang and Jiaohe ruins near Turpan.

Because of its vast territory, Xinjiang is rich in landscapes.

The Kunlun Mountains, Tianshan Mountains, and Altai Mountains stand majestically against the blue sky and are covered with snow. Yili Valley is filled with the fragrance of fruits and blooming flowers. Vast grasslands and lakes can be found in You’erdusi Basin.

There is also the Taklamakan Desert, the second largest desert in the world, known as the "Sea of Death".

In addition, you can experience amazing mirages in the desert, the mysterious sound of shifting sands, the wonderful desert sunrises and sunsets, the Yardang landforms in the Lop Nur Depression, and the dinosaurs and silicate wood fossils in the Junggar Basin.

There are other ethnic groups living in Xinjiang, but Islam has a great overall influence on social life in Xinjiang. Islam is believed in by more than 10 ethnic groups in Xinjiang, including the Uyghur, Kazakh, Hui, Kirgiz, Tajik, Uzbek, Tatar, Salar, Dongxiang, and Bao’an.

4. Kingdom of Melons and Fruit

Xinjiang grows a rich of variety of fruit. Its melons and fruit are famous for their juicy and sweet taste, which are loved by people all over the country.

A folk song in Xinjiang goes, "The grapes of Turpan, the melons of Hami, the fragrant pears of Korla, and the pomegranates of Yecheng are the best."

Other delicious Xinjiang fruits include apricots, figs, and sea-buckthorn.

Xinjiang province has a variety of cultural and natural attractions. The cities are interesting and full of culture, and there are large forested mountain chains that are good for adventurous hiking, camping, and experiencing rural ethnic life.

Kanas Lake, Hemu Village, and Baihaba Village are must-sees in the scenic area. Autumn and winter are the best visiting times with the most charming scenery.

Apricot blossoms in Xinghua Valley in April, seas of lavender in Yili River Valley in June, lush Nalati and Kalajun Grasslands, and quiet Sayram Lake are the most recommended scenic sites in Yili.

See more on Top 10 Things to Do in Xinjiang.

North Xinjiang areas such as Urumqi, Altay, Turpan, and Ili are suitable for visiting from June to October.

South Xinjiang areas such as Kashgar, Hetian, and Aksu are suitable for visiting from August to October.

See recommended Xinjiang tours. All our tours are customizable. We will help create a Xinjiang trip according to your group size, time, budget, interests, and other requirements.

Flights and bullet trains are the main ways to travel to and around Xinjiang.

If following the Silk Road through Gansu, which can be done by bullet train, Turpan would be the first stop in Xinjiang.

Private transport: Xinjiang comprises one sixth of all of China, resulting in long distances between attractions. A private vehicle with your own private driver and guide helps a lot. You can stop where you want and enjoy flexibility and expert adaptability.

In Xinjiang’s capital Urumqi, hotel conditions are best and options are most. In remote cities, such as Kashgar and Turpan, star-rated hotels might not be as good as the same rating of hotels in big cities due to local expectations.

When booking a hotel by yourself, please make sure the hotel is allowed to accept foreigners, and choose an area that is convenient/conducive:

Typical authentic Xinjiang meals include a lot of meat such as mutton, beef, and chicken. Islamic rules forbid alcohol and pork. A breakfast might include melons, fruit jam, and milk tea. Nangs, Uyghur flat bread like Indian naans, are commonly eaten with meals.

Do not miss the traditional Muslim yoghurt in Kashgar, juicy roasted skewers of meats, and the various Muslim rice dishes.

People traveling Xinjiang in autumn have the chance to try the sweet fruits of the region such as grapes, apricots, and Hami melons.

At Urumqi, Turpan, and Kashgar, visitors may be able to find “Western food”, but in rural areas, you’d need to make do with local food.

Is It Safe to Travel in Xinjiang?

Yes, Xinjiang is safe to visit. The Uyghur people are some of the most friendly you’ll ever come across. Most visitors feel it is totally safe in the main tourist areas, though there may be an elevated police presence.

When you travel in Xinjiang, you should pay attention to these things:

Please do not talk about sensitive issues such as religion and politics.

Sixty percent of the total population of the Xinjiang Uygur Autonomous Region are minorities, and their primary belief system is Islam. Please respect their customs (e.g. no alcohol and modest dress) and follow your guide’s advice when visiting a family or entering a mosque.

When visiting religious sites such as mosques, women should wear long–sleeve clothes. At certain times women are not allowed to enter mosques.

Taking photos at some attractions is forbidden. Please follow your tour guide's advice.

When you shop at a market, bargaining is taboo if you do not intend to make the purchase.

Explore Xinjiang with Us

All our tours are customizable. Contact us to create a trip according to your group size, time, budget, interests, and other requirements. See our recommended Xinjiang tours for inspiration: