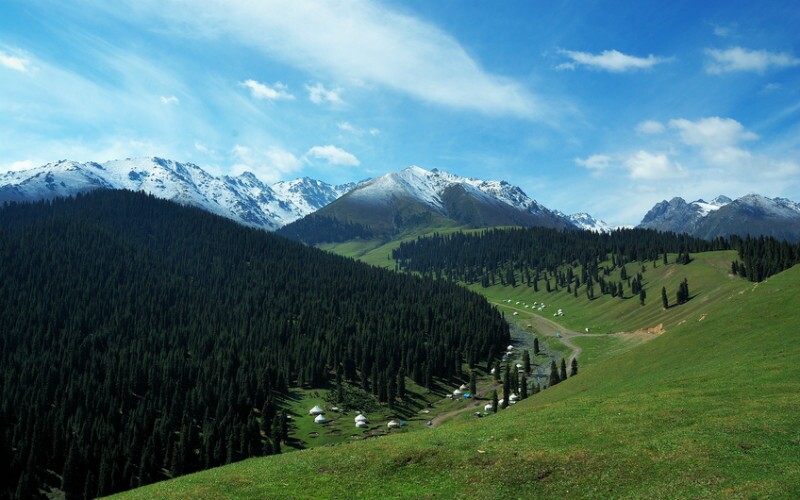 It is a large natural area and pasture region with many streams and a waterfall on Nan Shan in the Kelawucheng Mountain range about two hours south of Urumqi.

If you like nature and ethnic culture, the South Pasture on Nan Shan in the Kelawucheng Mountain range has both. It is a mountain region about 70 kilometers or 40 miles south of Urumqi that is kind of like Colorado high-mountain grassland, but greener, and there are evergreens. It is about two hours away from Urumqi, and people like to go there in the hot summers. There Kazaks continue to herd sheep, cattle and horses like their ancestors in a landscape of snow-covered peaks and emerald-green grasslands. The Kazakhs will guide you on tours on their horses, and you can have exotic meals and stay in their yurts inexpensively. A highlight in the South Pasture area is a glacier in the higher elevations of Nan Shan that is called Number One Glacier that you can travel to see by automobile. In the South Pasture area, you can see great mountain scenery, hike and ride horses, experience some of the Kazakh way of life, and dine and stay in a yurt relatively cheaply not far from Urumqi.

Kazakh people were nomadic, tribal shepherds and ranchers of cattle, sheep, goats, and horses. Now a lot of the 1.5 million Kazakhs who live in Xinjiang work in the cities or in agriculture. But in the mountains and the mountain valleys, the streams water the cattle, and the green grass is their food. So there the Kazakhs continue their ancient work, and they get a lot of meat they can serve to their guests. These Kazakhs are generally uneducated and earn money as shepherds and ranchers and by hosting tourists in yurts. They have a high-protein dairy-rich diet and are known for serving big portions of boiled or broiled meat with their hard salty bread that is called nan, their hard sour cheese called irimshiq, noodles and milk tea. An economical alternative to hotels and restaurants in Urumqi are the Kazakh yurts with their ethnic meals. A yurt may seem primitive. It is. When it is cold at night, you may have to burn wood or coal in a stove to stay warm.

Nearby in the Tian Shan mountain range, there is a lake called Tianchi (Heavenly Lake) in Tianshan Tianchi National Park that is rapidly being developed. But there is good hiking around the lake and more Kazakh yurts for inexpensive accommodations and meals.