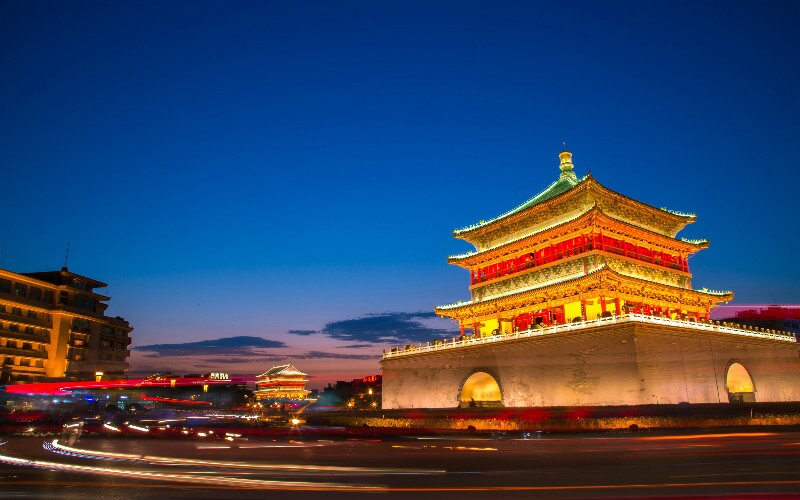 Built in the 17th year (1384) of the Hongwu Period of Emperor Zhu Yuanzhang’s reign during the Ming Dynasty (1368-1644), the Bell Tower sits in the center of Xi’an ancient city, which is the largest and the best-retained one of its kind in China, and it’s of a high historical and artistic value.

Architectural Features of the Bell Tower

Standing on a quadrate brick-wood-structured pedestal, the 36-meter tall (118 feet) Xi’an Bell Tower is 35.5 meters (116 feet) long at each side and is crowned by three-layer eaves, and a winding staircase leads you to the top of the tower inside. The Bell Tower is resplendent and magnificent, on the top of which stands a gilded bottle-shaped ornament which shines brightly in the sun. A 6-meter (20 feet) tall arched gate opens in the west, east, north and south sides respectively, through which all traffic passes.

Dark-green glazed tiles decorate the eaves of the tower, with the carved beams and painted rafters being adorned in a royal style. The windows are delicately decorated with bass-reliefs, and each bass-relief tells a historical story.

A number of highlighted cultural relics are exhibited in Xi’an Bell Tower, including a huge bell, inscribed steles and couplets hung on the column, all of which are of high historical and cultural values.

The original bell hung in the Bell Tower was made in the Jingyun Period of the Tang Dynasty (618-907), hence it was called Jingyun Bell, and it was moved to the Xi’an Forest of Stone Tablets Museum in 1953. The Xi’an Cultural Relics Bureau made a replica of Jingyun Bell and hung it in the north-west corner of the Bell Tower on January 30th, 1997, which is 2.45 meters (8 feet) tall and 6.5 tons (14,330 pounds) in weight, with an inscription carved on it.