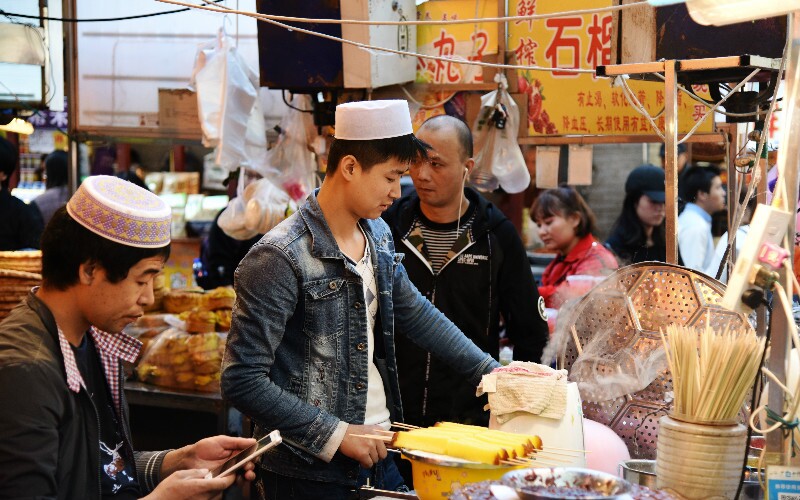 Muslim Food Street - One of the Best in China

When you hear about Xi'an, the first thing that probably pops to your mind is the Terracotta Warriors, and that's quite normal. These warriors are, after all, world famous!

However, China Highlights, in its endeavor to bring the best of every destination in China, encourages you to review Xi'an and go on a food trail. Here, we have shared our tips and advice on what you can sample from an extensive variety of local dishes.

The main food street area is known as Huimin Street or Muslim Quarter. It's a main street with a few intersecting roads. So the Xi’an Muslim Food Street is the collective name for a number of streets, including Beiyuanmen Street, North Guangji Street, Xiyangshi Street and Dapiyuan Street, and it has become a famous attraction of Xi’an for its profound Muslim cultural atmosphere.

Caution: If you are vegetarian, you may want to reconsider a walk through this street. This is a haven for meat lovers, and there meat all around.

A number of merchants and overseas students from the Arabic countries and Persia went to Xi’an for business and studying since the Western Han Dynasty (206 BC-9 AD); they settled down on the present Muslim Street, and they were called the Hui people by the locals.

One generation after another, the descendants of the Hui ethnic people multiplied and lived on the street, and the number has now reached over 60,000.

Features of the Muslim Street

Muslim Street or The Muslim Quarter, is a paved road with blue-gray flagstones and shaded by trees, along which the archaized stores of the Ming (1368-1644) and the Qing (1644-1911) dynasties are in line, and they're all operated by the Hui ethnic people.

A number of ancient architectural buildings are well-retained on the street, highlighted by Hanguang Gate of the Tang Dynasty (618-907), Xicheng Gate Tower Cluster of the Ming Dynasty (1368-1644), the City God Temple (a Taoist temple) and the Grand Mosque, all of which contrast finely with one another.

Though Muslim Street is regarded as a tourist scenic spot by foreigners, it's actually considered a snack street by the locals, and is an ideal place for locals to kill time during a hot summer.

As a matter of fact, what makes this Muslim Street a food street is unending lines of various restaurants and food stalls, some of which specialize in selling cakes, others in dried fruit or breads, and hordes of stalls selling barbequed meats on skewers.

You would also see folks making candy - real time! Xi'an sweets make a great gift to take back home at approximately RMB 25–50 a pack depending on the type.

One of the most famous dishes of Xi’an is the roujiamo - marinated beef or lamb stuffed inside a freshly baked bun.

Another traditional Uygur dish found here is the yangrou paomo - pita bread soaked in lamb soup. You can find a variety of soups here with all kinds of meats in them, including sheep blood.

Then there's the bean threads in Shaanxi flavoring and of course, the Xi’an dumplings.

Xi'an is also known for its cold noodles, which can be made from rice or from flour. On this street there are dozens of noodle stalls, where you can ask for cold noodle dish - you won't regret it!

In addition, Muslim Street is very close to the Bell Tower, the Drum Tower and Huajuexiang Grand Mosque, all of which are worthy of your visit during your Xi’an trip.

If there is a food street, we can't be far from a bar street. We stumbled upon a quaint little street with old-looking bars on both sides of the street.

Look for Defu Lane to get to the bars. This is the heart of Xi'an's nightlife. When we went to check it out and get some beers, it was quiet. There is a multi-storied tea house as well as bars with English names (example Old Henry's).

Travel Info You Can Use

Getting the Best Out of Xi'an and China

If you are planning a trip to Xi'an or anywhere else in China, we have just the perfect tool for you - China Highlight's unique create you own trip tool. We have experts who can help guide you and advise you on best combinations to make sure you get the most out of your visit to China and at competitive prices.

Here are our most popular tours including Muslim Quarter: