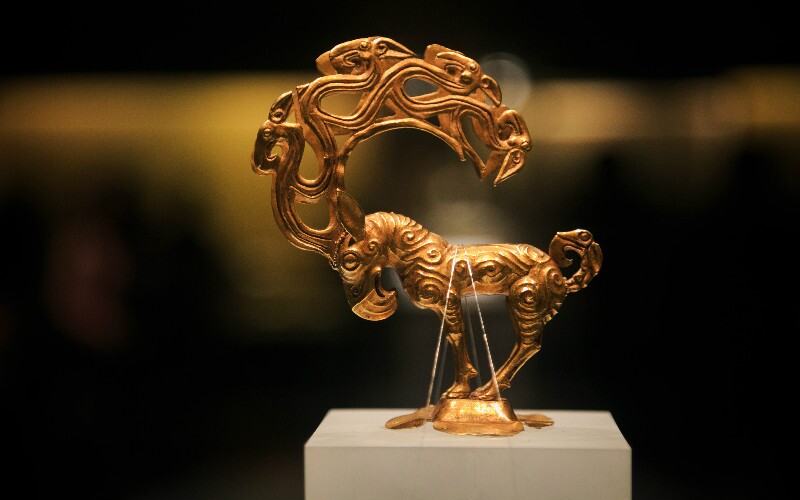 The Spring and Autumn Period was a fertile time for the emergence of key philosophies, schools of thought, and religious ideas as small states expanded, peacefully coexisted, and fought wars.

History of the Spring and Autumn Period

In 771 BC, after King You of Zhou replaced his wife with a concubine, the capital was attacked by his wife's father who ruled a region called Shen and by a nomadic tribe called the Quanrong.

The rulers of several of the regions in the empire proclaimed the queen's son, who was named Ji Yijiu, to be the new king.

The capital was moved eastward in 770 BC from Haojing in Xi'an to Luoyang in present-day Henan Province (marking the start of the Eastern Zhou Dynasty of 770–221 BC). The sack of the king and the change of capital marked the end of the rule of the Ji clan over the whole region.

After 771, the Zhou Dynasty became the nominal leading clan. The Spring and Autumn Period was the beginning of the Eastern Zhou era.

During this period, the Zhou empire reached the Yangtze River, and it was basically centered on the eastern part of the Yellow River (see our Eastern Zhou Map). The first king to rule in the eastern capital, Luoyang, was said to be King Ping.

The Zhou kings ruled as figureheads. Although the dynastic clan did have a small territory of their own at Luoyang, their territory was too small to raise an army. They depended on the surrounding regions fortheir defense. They performed religious ceremonies.

The whole Zhou empire was basically centered on the eastern part of the Yellow River. The territory was divided into many fiefdoms and kingdoms.

The political structure of the dozens of states at the beginning of the era was fairly loose. Representatives of the most powerful states and the weaker states held a council to discuss common treaties or other problems.

Sometimes, the leader of a powerful state would be recognized as the hegemon during a time of crisis or war. During this time, the states on the frontier, such as Qin, grew stronger since they had more room for expansion. There was a lot of rivalry and wars.

Major Events of the Spring and Autumn Period

The Zhou emperors were ceremonial figureheads although they did have a small amount of territory of their own at Luoyang.

Their territory was too small to raise an army of their own that was big enough to defend them. They depended on the surrounding regions, and they performed religious ceremonies.

They were perhaps like the modern British royalty except that the populace believed they had real powers as representatives of heaven as gods.

During the approximately 300 years of the Spring and Autumn Period, many small fiefdoms and states slowly coalesced through conquest.

There was a lot of rivalry and wars. In about 550 BC, there were four major powers: Qin in the west, Jin in the center, Chu in the south, and Qi in the east.

In 497, the nobles in Jin began a civil war. In 453, there were only four major regions in Jin, and in that year the three weaker clans destroyed the stronger, leaving only Han, Wei, and Zhao. In 403, they divided the Jin state between themselves.

The Jin state was a major state in central northern China during the middle part of the Zhou Dynasty but the Jin duke lost power to his nobles.

The Philosophy and Religion

The Spring and Autumn Period was known as the time of the "Hundred Schools of Thought". During the beginning and middle parts of the era, the existence of many small states and fiefdoms with their own languages，tribal and cultural backgrounds allowed many schools of thought to exist simultaneously.

Since there was some level of peace, people could discuss and teach their ideas freely. The Spring and Autumn Period was a fertile time for the development of philosophy and religion.Major philosophies emerged that were passed to later empires: Legalism, Confucianism, and Taoism.

Other major schools of thought, such as Mohism, Buddhism, and others that we don't know anything about, were not passed down to later empires. Confucianism was probably the first major school to emerge of the three remaining dominant schools.

Confucius was perhaps the first major philosopher whose teachings survived and became widely accepted in this era.

In the Analects, a book of his pithy sayings, it is recorded that he said he didn't invent any of his philosophy. He was only transmitting the ancient teachings to his disciples. He wanted them to read the ancient texts.

He said he wanted to restore and teach the doctrine of the Mandate of Heaven. This important belief of his political philosophy was that Heaven would choose a person and his clan to rule. He mixed his theology with his ideas of politics.

He encouraged everybody to behave as they should in whatever role they had in their society. He said that if they did so, there would be harmony, prosperity, and happiness.

Legalist ideas were not accepted everywhere. A major antithetical philosophy was later developed by court rulers in Qin after Shang Yang (390–338) came to power.

This teaching justified subservience to the emperor and total war. A centralized bureaucracy was emphasized and the people were used for large construction projects to strengthen the empire.

Legalism taught that people's primary role in life was to obey the rule of emperors, and so they did away with familial relationships, freedoms, and accepted cultural ethics throughout their domain. Another major school that became a basis for post-religion is called Daoism. The first teacher was said to be Laozi (老子). People differ about whether he was born during the Spring and Autumn Period or afterwards.

It is said that Laozi wrote the Dao De Jing (道德经) but historians debate about whether he actually wrote the text, when Laozi lived, and whether he was a real historical person.

Most people place him as a contemporary of the philosopher Confucius. They say he lived around 450 or 600 BC. Others say that he lived in about 380 BC.

It is thought that another influential Daoist philosopher,named Zhuangzi (庄子), wrote the Zhuangzi.

It is said that Daoism wasn't thought of as a systematic school of philosophy and religion until the Han Dynasty. In the Han era, the Dao De Jing was considered to be the main Taoist scripture and the Zhuangzi was a secondary scripture.

Many Spring and Autumn Period sites are in Luoyang. An important Zhou Dynasty site is the Museum of the Zhou Imperial Carriages where you can tour the archaeological excavations and see the artifacts. Visit Luoyang with our Luoyang tours.

Most of the discovered historical relics from the Zhou Dynasty are displayed at Shaanxi History Museum in Xi'an. China Highlight's tours of Xi'an, almost without exception, include a visit to the museum.

China History 10 Simple Facts to Learn about the Song Dynasty