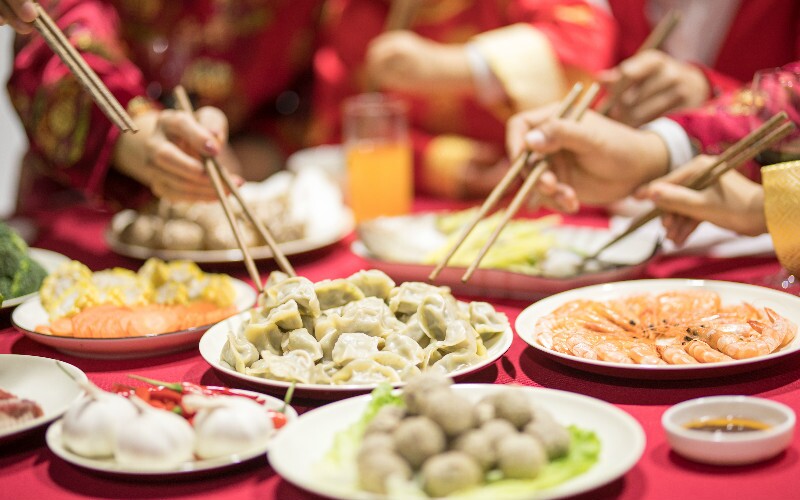 Certain dishes are eaten during the Chinese New Year for their symbolic meaning. Lucky food is served during the 16-day festival season, especially on Chinese New Year dinner on New Year's Eve, which is believed to bring good luck for the coming year.

The auspicious symbolism of these traditional Chinese New Year foods is based on their pronunciations or appearance. Not only do the dishes themselves matter, but also the preparation, and ways of serving and eating mean a lot.

The most common Chinese New Year foods include dumplings, fish, spring rolls, and niangao. We've rounded up 7 essential Chinese, or Lunar, New Year dishes, and included the symbolism behind them all.

1. Fish — an Increase in Prosperity

The fish should be the last dish left with some left over, as this has auspicious homophonics for there being surpluses every year. This is practiced north of the Yangtze River, but in other areas the head and tail of the fish shouldn't be eaten until the beginning of the year, which expresses the hope that the year will start and finish with surplus.

Steamed fish is one of the most famous Chinese New Year recipes. What fish should be chosen for the New Year dinner is based on auspicious homophonics.

With a history of more than 1,800 years, dumpling (饺子 Jiǎozi /jyaoww-dzrr/) is a classic lucky food for Lunar New Year, and a traditional dish eaten on Chinese New Year's Eve, widely popular in China, especially in North China.

Chinese dumplings can be made to look like Chinese silver ingots (which are not bars, but boat-shaped, oval, and turned up at the two ends). Legend has it that the more dumplings you eat during the New Year celebrations, the more money you can make in the New Year.

Dumplings generally consist of minced meat and finely-chopped vegetables wrapped in a thin and elastic dough skin. Popular fillings are minced pork, diced shrimp, fish, ground chicken, beef, and vegetables. They can be cooked by boiling, steaming, frying or baking.

How they're made: Almost all Chinese people can make dumplings. First they mix the dough, second make the dough into round "wrappers" with a rolling pin, third fill the wrappers with stuffing, fourth pinch the "wrapper" together into the desired shape, and fifth cook them.

Chicken is a homophone for ji (吉, meaning 'good luck' and 'prosperity'). That is one thing that makes it such a welcome dish at reunion dinners. Chicken is usually served whole — head and feet included — to symbolize 'unity' and 'wholeness', while also signifying 'a good beginning and end' to the year.

Chicken is typically braised or roasted for a reunion meal with simple ingredients such as ginger or soy. Traditionally, a whole chicken is first offered to one's ancestors and gods for blessings and protection.

It is interesting that the chicken feet are usually eaten by the breadwinner in the family, as they might help them 'grab' onto wealth (the word 'grab' is a homophone of chicken's 'talons').

Glutinous rice cake (年糕 Niángāo /nyen-gaoww/) is a lucky food eaten on Chinese New Year's Eve. In Chinese, glutinous rice cake sounds like it means "getting higher year-on- by year". In Chinese people's minds, this means the higher you are the more prosperous your business is a general improvement in life. The main ingredients of niangao are sticky rice, sugar, chestnuts, Chinese dates, and lotus leaves.

Spring rolls are a Cantonese dim sum dish of cylindrical-shaped rolls filled with vegetables, meat, or something sweet. Fillings are wrapped in thin dough wrappers, then fried, when the spring rolls are given their golden-yellow color.

黄金万两 (hwung-jin wan-lyang/): 'A ton of gold' (because fried spring rolls look like gold bars) — a wish for prosperity.

Sweet rice ball (汤圆 Tāngyuán /tung-ywen/) is the main food for China's Lantern Festival, however, in south China, people eat them throughout the Spring Festival. The pronunciation and round shape of tangyuan are associated with reunion and being together. That's why they are favored by the Chinese during the New Year celebrations.

It is a lucky food eaten on Chinese New Year Day in North China.

They are longer than normal noodles and uncut, either fried and served on a plate, or boiled and served in a bowl with their broth.

Tender and juicy homemade pork meatballs are steamed/braised, served with vegetables, and tossed in a sweet and sticky sauce. They are so named because of their shape, which resembles the head of a lion.

Lions represent 'strength' in Chinese culture, while the meatballs signify 'family unity' (because of their roundness).

Steamed pork belly with taro is a popular dish that often shows up on dinner tables during Chinese New Year festivities in southern China.

Pork is representative of 'a rich, prosperous life', 'wealth', 'strength', and 'abundant blessings'. Steamed pork expresses the wish that the New Year will be prosperous.

Tender pork slices with a harmonious profile of sweet, salty, and tangy notes are paired with soft and starchy taro slices.

Shrimp is a popular Chinese New Year dish among Cantonese people. Shrimp represents 'liveliness', as well as 'happiness' and 'good fortune', because the Cantonese word for shrimp, ha, sounds like laughter.

Chinese New Year's reunion dinner menu is not complete without vegetables. Vegetables signify 'spring', 'renewal', 'energy', 'progress', and 'wealth'. There are several traditional vegetables, each of them symbolizes something specific.

Certain fruits are eaten during the Chinese New Year period, such as tangerines and oranges, and pomeloes. They are selected as they are particularly round and "golden" in color, symbolizing fullness and wealth, but more obviously for the lucky sound they bring when spoken.

Eating and displaying tangerines and oranges is believed to bring good luck and fortune due to their pronunciation, and even writing. The Chinese for orange (and tangerine) is 橙 (chéng /chnng/), which sounds the same as the Chinese for 'success' (成). One of the ways of writing tangerine (桔 jú /jyoo/) contains the Chinese character for luck (吉 jí /jee/).

Eating pomeloes/shaddocks is thought to bring continuous prosperity. The more you eat, the more wealth it will bring, as the traditional saying goes. The Chinese for pomelo (柚 yòu /yo/) sounds like 'to have' (有 yǒu), except for the tone, and exactly like 'again' (又 yòu).