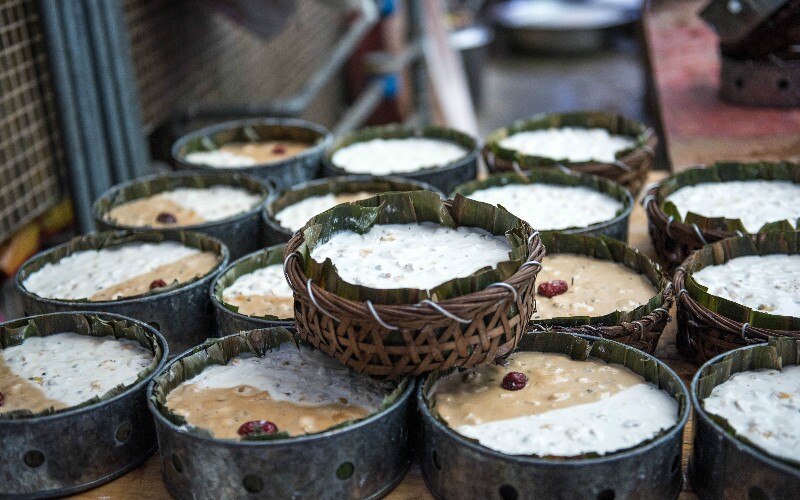 Nian gao, also niangao (年糕 /nyen-gao/ 'year cake'), is a sweet rice cake made of glutinous rice flour and sugar with an auspicious meaning. It is a popular dessert eaten during Chinese New Year. Find out its meaning, legends, types, and recipe here.

Niangao is 年糕 in Chinese. The character 年 means ‘year’, and the character 糕 means ‘cake’, which share the same pronunciation as 高 (/gao/), meaning ‘tall’ or ‘high’.

So, the pronunciation of niangao sounds like 'year high' (年高), which symbolizes a higher income, a higher position, the growth of children, and generally the promise of a better year in Chinese minds. Therefore, it is considered good luck to eat it niangao during the Chinese New Year period. Know more about Chinese New Year lucky food and symbolism.

The sticky sweet rice cake niangao was believed to have been created as a cunning offering to the Kitchen God, who is believed to reside in every house. At the end of every year, folklore says, the Kitchen God makes his “yearly report” to the Jade Emperor. To prevent him from badmouthing their house, people offered niangao, which would stick his mouth shut. Hence, niangao is prepared for offering before Chinese New Year.

Nian Gao has another legend about its origin, dating back to around 2,500 years ago:

Legend has it that, after the death of Wu Zixu (伍子胥, 559–484 BC), a general and politician of the Wu kingdom in the Spring and Autumn Period (771–476 BC), the king of Yue, Goujian, attacked the capital of Wu, and the Wu army and citizens were trapped in the city and there was no food. Many people starved to death during the siege.

At this time, someone thought of Wu Zixu's helpful words: "If the country is in trouble and the people are in need of food, go and dig three feet under the city wall and get food." The soldiers did what Wu Zixu instructed and found that the wall’s foundation was built with special bricks made from glutinous rice flour. This food saved many people from starvation. These bricks were the supposed original niangao.

After that, people made niangao every year to commemorate Wu Zixu. As time passed, niangao became what is now known as Chinese New Year cake.

The rice cakes of northern China are mainly white and yellow in color and sweet in taste. They can be steamed or fried. Beijing niangao is made with jujubes and either glutinous rice or yellow rice. In Shanxi and Inner Mongolia, people use red bean paste or jujube paste for a filling. In Hebei, people add fillings such as jujube (dates), small red beans, and green beans.

Shanghai-style niangao is white and made with non-glutinous rice. The popular cooking method is stir-frying the sliced niangao, known as chao niangao (炒年糕 ‘fried year cake’). The cake is usually served as a dish, fried together with scallions, beef, pork, cabbage, etc.

In the Jiangnan (Yangtze Delta) region, niangao can be sweet or savory, cooked by steaming, slice-frying, or even stewing in a soup.

Cantonese rice cake is usually made with brown sugar, which results in its dark yellow color. It is stretchy and sticky. It can be eaten as it is or pan-fried after being sliced, which is known as fried niangao (煎年糕) in south China.

Fujian/Hokkien nian gao is usually made with white sugar or brown sugar, peanuts, red dates, melon seeds, walnuts, and other fruits and seeds. It can be wrapped in egg or cornstarch (corn flour) and fried.

The basic ingredients of niangao are simple: glutinous rice flour (a.k.a. sweet rice flour), white or brown sugar, and water. Nian gao can be steamed or baked. Here are some simple instructions for making niangao: