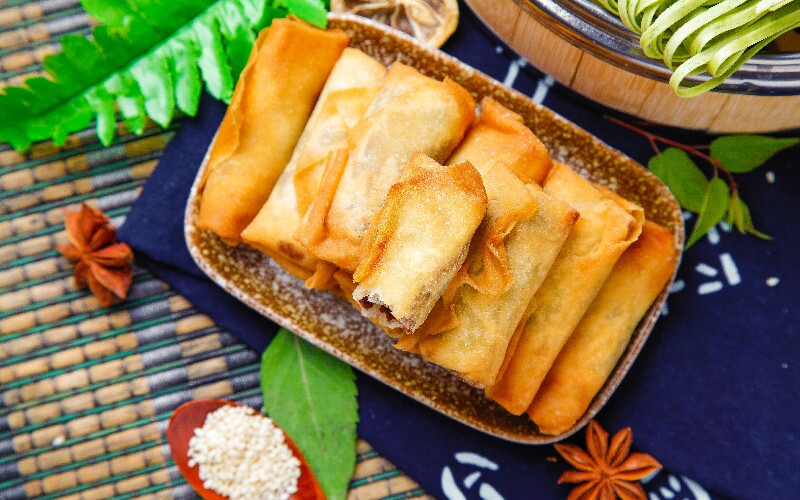 Spring rolls, also named 'spring pancakes' (春饼) or 'thin pancakes' (薄饼), are a traditional Chinese Chinese New Year food. They are popular around the world, but especially in regions south of the Yangtze River.

Spring rolls are usually eaten during the Spring Festival in mainland China, hence the name. Eating spring rolls is a way to welcome the arrival of spring. The golden cylindrical-shaped rolls represent gold bars — which symbolize wealth.

According to records, before the Tang Dynasty (618 – 907), everyone made a kind of thin pancake with flour on the day of 'the Beginning of Spring'. People put them in a dish and added special vegetables and fruits. This was called the 'spring dish' (春盘). It was sent to relatives and friends as a spring present and blessing.

In the Tang Dynasty, the 'spring dish' was generally decorated with carrots and celery by the poor, while it had various additions in rich families. There were sauces, baked and salted meats, various fried dishes, spinach, chives, beansprouts, bean vermicelli, and eggs.

In the Song Dynasty, the 'spring dish' served in the imperial palace was even more luxurious.

In the Ming and Qing dynasties (1367 – 1911), with the development of cookery skills, cooks rolled the traditional pancakes into mignon spring rolls. They were not only well-liked by common folk, but were also famous in the palace.

During the Qing Dynasty, when the grand banquet — the Manchu Han Imperial Feast (满汉全席) with 128 dishes — was held, spring rolls were served as one of its nine main pastries.

Now, spring rolls have many delicious varieties. They are better than ever before.

How Spring Rolls Are Made

In China and Overseas

Spring rolls served in Chinese restaurants in America reportedly usually have meat fillings, and can be as big as hamburgers. UK Chinese takeaway spring rolls are about an inch wide and 3 inches long (3 x 8 cm).

The people of Chengdu steam spring rolls. They fill the wrappers with cold vegetables or fried fillings, such as sliced pork with spring onions or garlic. Chili powder, soy sauce, vinegar, paprika, processed sesame seeds, and crushed peanuts are added as seasonings.

Spring rolls are called pancakes in Xiamen. They are crispy, tender, sweet, delicious and rich in nutrients.

The wrappers are filled with all kinds of ingredients, including bamboo shoots, carrots, peas, beansprouts, eggs, fish, shrimp, oysters, diced meat, and dried tofu. Dried tofu is cut or shredded, the thinner the better, and can absorb fluid from the meaty fillings, which prevents the wrappers from becoming soggy.

In Hong Kong, spring rolls are one of the common dim sum pastries eaten when people talk over a cup of tea in a teahouse — have yum cha.

They are about four inches long and about an inch in diameter. The wrappers are fried until they are golden brown. Inside the wrappers, the fillings are abundant and can include dried sliced mushrooms, shredded pork, dried bamboo shoot slices, vermicelli and agarics. Usually, a dish contains three ingredients.

When eating, people use scissors to cut the spring rolls in half and dip them in sauces. There are various spring rolls in Hong Kong. Spring rolls sold in stalls by vendors are two inches or more in diameter. The wrappers are crispier than traditional ones, and the fillings are more abundant, therefore they are very popular as street snacks.