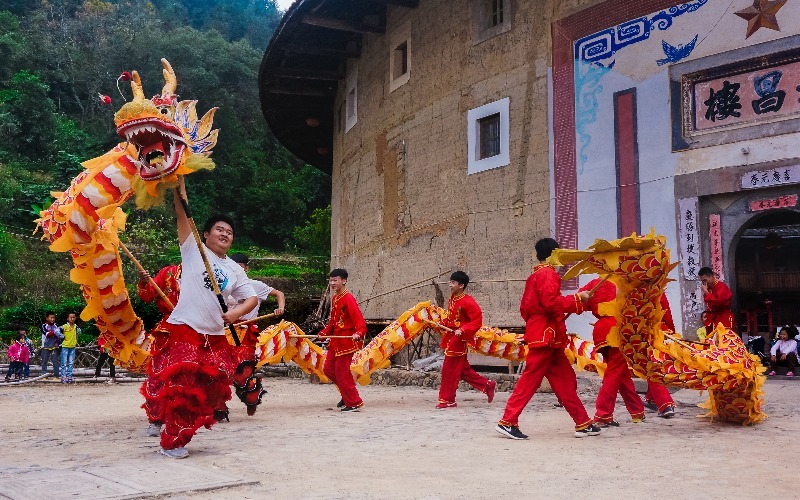 Lunar New Year marks the beginning of a new year on China’s traditional lunisolar calendar. It is a time for family gatherings.

Lunar New Year falls on different dates each year, but always falls between January 21 and February 20 of the international standard calendar. Its traditional Chinese celebrations last for 16 days, from Lunar New Year’s Eve to the Lantern Festival.

In 2023, Lunar New Year will fall on Sunday, January 22nd and start a year of the Rabbit.

The Origin of Lunar New Year

Lunar New Year has enjoyed a history of about 3,500 years. A very old legend about Lunar New Year is still popular even today. A monster named Nian would attack villagers every Lunar New Year's Eve. In order to chase the beast away, people used loud noises, fire, and the color red. Celebrations with these elements have been preserved to this day.

Each year in the Lunar calendar is associated with one of 12 Chinese zodiac animals. The 12 zodiac animals in order are: Rat, Ox, Tiger, Rabbit, Dragon, Snake, Horse, Goat, Monkey, Rooster, Dog, and Pig.

The zodiac signs in most countries are identical to the Chinese ones, but a few of the animals differ in some countries.

In the Thai zodiac there is no Dragon but rather a Naga (a mythical monster that looks like a giant snake). We have more for you to read about animals signs in Asian countries.

Lunar New Year is a festival rich in traditions and customs. Asian countries share many similar traditions, but each also has some unique traditions.

People usually start preparing for the New Year a week or half a month in advance of the actual date of the holiday. From the day of ‘Little Year’ (小年 xiǎo nián, one week before Lunar New Year), people begin to prepare New Year commodities, clean house, decorate houses with lanterns and New Year paintings, pray to the Kitchen God, etc.

All these activities share a common theme, that is: ‘bid farewell to the old and welcome the new’.

Like in the Christmas season, shopping is a major activity of the Lunar New Year holiday season. On the days leading up to the festival, there are many New Year street markets.

2. Sending off the Kitchen God

Sending off ‘Kitchen God’ is a very old custom. On the 23rd day of the 12th month of the Lunar Calendar, according to Chinese tradition, Kitchen God departs to deliver an annual report on the household’s activities to the Jade Emperor in heaven.

According to the report, the Jade Emperor will decide to bless or punish that family in the New Year.

Therefore, people prepare abundant of votive offers to show their thankfulness to the Kitchen God, and also wish that he would say good things about them to the Jade Emperor, as well as asking, on their behalf, for a peaceful and prosperous coming New Year.

It is traditional for families to clean their houses and the areas surrounding them before the start of the new year. This is called ‘sweeping away the dust’. The word 'dust' in Chinese is a homophone for 'old', thus cleaning the house is symbolic of driving away the bad luck of the previous year to allow for a new start.

Lunar New Year's Eve, the last day of the old year, is the most important day of the holiday. There are a lot of traditions for this day.

On Lunar New Year’s Eve, doors and windows are decorated with brand new Spring Festival couplets, New Year's pictures, papercuts, images of the Door God, lanterns, etc. All of them are red.

It represents a way to scare away the legendary monster named Nian (which also means ‘year’). Legend has it that Nian would devour people and livestock on New Year's Eve if not successfully scared away.

Making offerings to the ancestors is one of the most important folk customs of Lunar New Year. It is a way to show respect and piety. In addition, ancestral spirits are believed to protect their descendants and to bless them with luck and prosperity in the New Year.

In some places, ancestors are honored before the New Year's Eve feast, while in others the ceremony is conducted at midnight on New Year's Eve.

In some regions, offerings are made to the ancestors at home, while in others, people visit their ancestors' graves and make offerings. Offerings usually include meat, chicken, wine, joss sticks, and joss paper.

On New Year’s Eve, family members, some of whom may have traveled long distances to return home, gather for a reunion. Lunar New Year's Eve dinner, also called ‘Reunion Feast’, is the biggest and most important dinner of the year.

Family members sit around a round table and enjoy a wide variety of delicious foods and drinks. Most of them are symbolic with lucky meanings, such as fish (meaning ‘surplus’ or ‘abundance’), jiaozi i.e. dumplings (meaning ‘wealth’), lotus roots (meaning ‘wisdom’), lettuce (meaning ‘wealth’), sausage (meaning ‘longevity’), niangao (meaning the promise of a ‘better year’), and so on.

After the New Year's Eve dinner, it is a traditional custom to give red envelopes containing money, which are known as hongbao (red envelopes) in Mandarin, lai see in Cantonese, or lì xì in Vietnamese.

5. Stay up Past Midnight

Lunar New Year’s Eve is probably the only night of the year when the whole family stay up late. According to traditional Chinese belief, staying up on this night brings longevity to parents — the longer you can stay awake, the longer your parents will live.

People usually sit around, eat snacks, talk, tell stories, and play games to wait for the arrival of the New Year.

Even if people fall asleep, a light in the house is often kept on for the whole night, which is believed to invoke good luck and 'scare away' ghosts and spirits of misfortune that may otherwise compromise the luck of the New Year.

This gathering and staying together during the time between the New Year’s Eve meal and midnight is called shou sui (守岁 shǒusuì ‘to see in the New Year’, literally ‘keep watch [over a] year (of crop harvests)’) and often precedes an all-night party.

The first day of the Lunar New Year symbolizes a new start in one’s life, refreshing hopes for prosperity, wealth, and happiness. Some believe that what happens on the first day of the New Year affects the rest of the year to come. So, there are a plenty of traditions and superstitions for this day (and a day or two afterwards).

1. Setting Off Firecrackers and Fireworks

At the stroke of midnight on New Year's Day, the whole sky will be lit up by and resound with fireworks and firecrackers as a way to bid farewell to the old year and celebrate the coming of the new year. This usually lasts for around an hour, though dwindling in intensity after about 10 minutes.

Firecrackers are again lit at dawn, which are called ‘open-door firecrackers’ among Chinese people, welcoming in a prosperous new year.

See more about Chinese New Year Firecrackers: Why Set Off and Meaning.

After the fireworks and firecrackers at midnight, people start to greet each other with happy New Year messages and give/receive red envelopes (in person or with texts and apps, particularly WeChat, which can also send electronic red envelopes!).

On New Year’s Day and for the next several days, people still follow the custom of exchanging visits — with close relatives first, then with distant relatives and friends.

One old superstition is that a married daughter is not allowed to visit the house of her parents on Chinese New Year's Day, as this is believed to bring bad luck to the parents.

People drop in at relatives and friends' houses, bringing gifts or red envelopes, and greeting one another with 'Happy New Year!’ etc. It is impolite to visit someone without a gift.

Dragon and lion dances are widely seen during Chinese New Year celebrations. They are a symbol of China's culture, and they are believed to bring luck and prosperity.

Just as use of lucky words and actions are encouraged at this time, so there are also taboos to be aware of.

The fifteenth day of the Lunar New Year is known as the Chinese Lantern Festival. It signals the end of the New Year festival period.

Lunar New Year is traditionally celebrated in East Asian countries, especially in China and others influenced by Chinese culture like Vietnam, South Korea, Singapore, Malaysia, and Indonesia. Lunar New Year may be called different names in different East Asian countries and communities, but it is celebrated on the same date (and surrounding days) with similar celebrations.

Vietnamese Lunar New Year is called Tet (or Tet Nguyen Dan). It is a three-day holiday but people in Vietnam often spend nearly half a month celebrating the festival.

Vietnamese decorate their houses with hoa đào (peach trees that are blossoming) or hoa mai (yellow Mai trees in full bloom). They don’t usually use red lanterns or paper cuttings as Chinese do.

While Chinese New Year is not an official national holiday in Thailand, it is in four provinces (Narathiwat, Pattani, Yala, and Satun). It is widely celebrated all across Thailand, especially in areas with large populations of Chinese, such as Bangkok.

Japan used to celebrate Lunar New Year according to the traditional lunar calendar. However, during the Meiji Era (1868–1912), the Japanese government adopted the Gregorian calendar with New Year beginning on January 1.

Although Chinese New Year isn’t a holiday in Japan, celebration activities still can be seen in the Chinatowns.