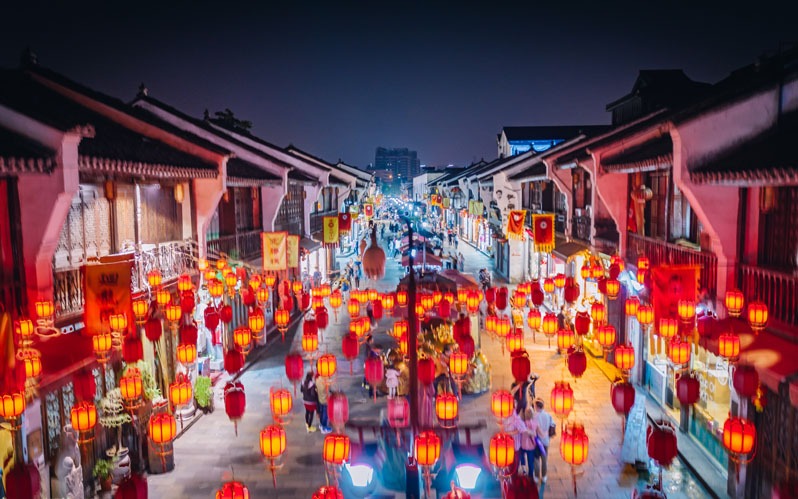 On the 15th day of the first lunar month, two weeks after Chinese New Year, another important traditional Chinese festival, the Chinese Lantern Festival or Yuan Xiao Jie or Yuanxiao Festival (元宵节), is celebrated. It marks the first full moon of the new lunar year and the end of the Chinese New Year (Spring Festival) period. Chinese Lantern Festival 2022 will be celebrated on February 5th in 2023.

On the night of the Chinese Lantern Festival, streets are decorated with colorful lanterns, often with riddles written on them. People eat sweet rice balls called tangyuan, watch dragon and lion dances, and set off fireworks.

When is the Chinese Lantern Festival 2023?

The Significance of the Chinese Lantern Festival

Chinese New year, also called Spring Festival in China, marks the beginning of the Spring season. The Chinese Lantern Festival marks the final day of these celebrations. After the Lantern Festival, Chinese New Year taboos are no longer in effect, and all New Year decorations are taken down. Some people still wait till after the festival to return to work or study.

The lanterns symbolize people letting go of the past year and welcoming the new year with good fortune.

The Origins and Stories of Chinese Lantern Festival

Chinese Lantern Festival can be traced back to 2,000 years ago. There are many origin stories about it. Here are two of the most popular ones:

Ruling the beginning of the Eastern Han Dynasty (25–220), Emperor Hanmingdi was an advocate of Buddhism. He heard that some monks lit lanterns in their temples to show respect to Buddha on the fifteenth day of the first lunar month.

Therefore, he ordered that all the temples, households, and royal palaces should light lanterns on that evening. This Buddhist custom gradually became a grand festival among the people of China.

Origin Story 2: A Trick Played on the Jade Emperor

Then, a wise man advised the villagers to hang red lanterns to give the Jade Emperor the impression that the village was already on fire. The emperor was fooled and the village survived. This tradition of hanging red lanterns on the fifteenth day of the lunar year has continued until the present time.

How Do Chinese Celebrate the Chinese Lantern Festival?

Lighting and appreciating lanterns is the main activity of Yuan Xiao Jie. Lanterns are seen everywhere including in houses, shopping malls, parks, and streets. The (traditional) lanterns are almost always red to invoke good fortune.

Lighting lanterns symbolize "illuminating the future". It is a way for people to pray that they will have smooth futures and to express their best wishes for their families. In the Taiwanese Mandarin dialect, the Chinese word for lantern (灯 dēng) is pronounced similarly to (丁 dīng), which means 'to have a new-born baby', so in Taiwan putting up lanterns could even express a wish for couples to have a baby!

During the Lantern Festival, many big lantern fairs are held in China, such as Qinhuai International Lantern Festival in Nanjing and Shanghai Yuyuan Lantern Festival. The lanterns' artwork vividly illustrates traditional Chinese imagery and symbols, such as fruits, flowers, birds, animals, people, and buildings.

Guessing (solving) lantern riddles started in the Song Dynasty (960–1279), and it is one of the most important and popular activities of the Lantern Festival. Lantern owners write riddles on paper notes and paste them on the colorful lanterns. People crowd round to guess the riddles.

If someone thinks they have the right answer, they can pull the riddle off and go to the lantern owner to check their answer. If the answer is right, there is usually a small gift as a prize.

Eating tangyuan is an important custom of the Lantern Festival. Tangyuan (汤圆 tāngyuán /tung-ywen/ 'soup round'), also called yuanxiao in the north, are balls of glutinous rice boiled in a sweet soup.

As tangyuan is pronounced similarly to tuanyuan (团圆 /twan-ywen/ 'group round'), which means 'reunion' and 'completeness', Chinese people believe that the round shape of the balls and bowls symbolize wholeness and togetherness. The popular lucky saying when eating tangyuan is 团团圆圆 (/Tuántuán yuányuán/ 'group-group round-round'): 'Happy (family) reunion!'

Check out Lantern Festival Food below to learn more about tangyuan.

As two of the most outstanding traditional folk dances in China, dragon and lion dances are common during the Lantern Festival. Chinese people (traditionally) regard the lion as a symbol of bravery and strength and believe that it's appearance can drive away evil and protect people and their livestock. Chinese people worship the dragon and regard it as a symbol of good luck.

The most traditional food eaten at Chinese Lantern Festival is tangyuan (汤圆 tāngyuán /tung-ywen/ 'soup round'), also called yuanxiao in northern China. They are ball-shaped dumplings, made of glutinous rice flour and stuffed with different fillings, such as brown sugar, sesame seeds, peanuts, walnuts, bean paste, and jujube paste or a combination of ingredients. They are usually sweet.

It is a must-eat food at the Chinese Lantern Festival due to its auspicious meaning in every aspect — from its round shape to its sweet taste and fine-sounding pronunciation.

It is believed that the custom of eating tangyuan originated during the Song Dynasty era, and became popular during the Ming (1368–1644) and Qing (1644–1911) dynastic periods.

Chinese Lantern Festival has become increasingly popular in Western countries in recent years. Many large lantern displays are held, such as: