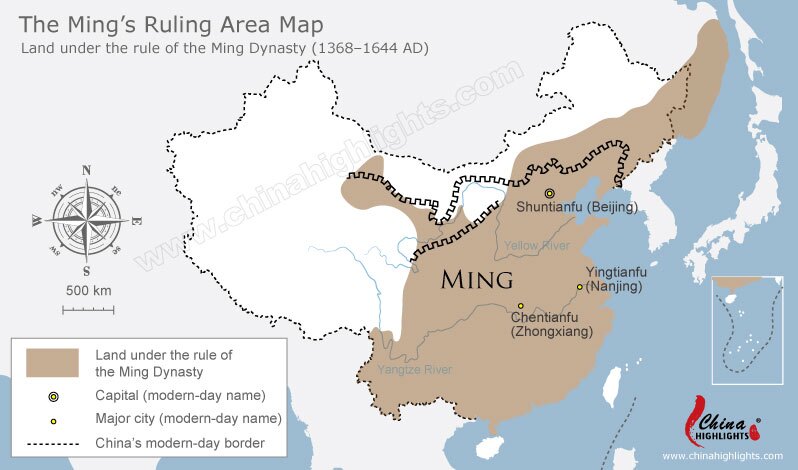 Founded by Zhu Yuanzhang, the Ming Dynasty was the last dynasty ruled by Han people. It flourished (initially) with a growth in foreign trade, art, and literature.

How Was the Ming Dynasty Founded?

The end of the Yuan Dynasty was brought about by the Red Turban Rebellion, which started due to the Yuan government’s corruption and heavy taxes.

Desperate, poor peasants flocked to join the uprising. Zhu Yuanzhang was one of them. After decades of effort, Zhu Yuanzhang became a leader of the Red Turban Rebellion.

In 1368, Zhu Yuanzhang’s peasant army defeated the Yuan Dynasty and established the Ming Dynasty with Nanjing as its capital. Hongwu Emperor was his title, meaning ‘Great Military’.

During their 276-year reign, the Ming Dynasty made China one of the most prosperous countries in the world at that time. There were developments in architecture, overseas trade, arts, and culture.

The Construction of the Great Wall

The Great Wall was the greatest military project in the ancient and medieval world. Although previous dynasties had built the Wall, the Ming Dynasty contributed more to it than any other dynasty. Most of the Great Wall remaining today was built or repaired during the Ming Dynasty.

The Construction of the Forbidden City

Zheng He's Voyage to the West

Zheng He's Voyages to the West.

Emperor Yongle built a big fleet, and he made Zheng He (1371–1433), who was a Muslim eunuch, the leader of it. The fleet was sent on expeditions to gather tributes and to go to the West to trade.

The fleet sailed as far as Arabia. Zheng He and his Muslim sailors made the Hajj. Besides Mecca, he may have also reached Africa. It is said that seven missions were sent out and that 2,000 ships were constructed for these missions.

The Golden Age of Blue and White Porcelain

The period of Emperor Yongle (1402–24) and Emperor Xuande (1425–35) was the golden age of blue and white porcelain. The blue paint with unique characteristics that Zheng He brought back from ancient Persia during his voyages to the west provided the material basis for designs of that period.

Due to trade and frequent cultural exchanges, the shape and ornamentation of porcelain in this period were also influenced by western Asia.

The popularity of vernacular novels gave birth to the four great masterpieces of the Ming Dynasty: Journey to the West, the Romance of the Three Kingdoms, Water Margin, and the Golden Lotus.

Famous Emperors of the Ming Dynasty

There were 16 emperors during the Ming Dynasty era.

13 out of the 16 emperors of the Ming Dynasty were buried in the Ming Tombs near Beijing. It is the largest imperial mausoleum complex in China and also in the world.

The Fall of the Ming Dynasty — Poverty, Rebellion, Invasion

Corruption was rampant in the late Ming Dynasty. The powerful seized the peasants' land and used their privileges to avoid paying taxes to the state.  Heavy taxes were then imposed on the peasants. Crop failures caused by unseasonably cold weather led to a famine.

The government could not solve the poverty problems and continued to oppress the people. A peasant soldier named Li Zicheng (1606–1645) mutinied and led a rebellion. The Ming Dynasty was not only embattled by the rebel army, but also suffered from constant threats of invasion by the Manchu army.

In 1644, Li Zicheng's troops attacked the Forbidden City. The last Ming emperor hanged himself on a tree, and the Ming Dynasty fell. But the rebel troops didn't enjoy this victory. The Manchus seized their opportunity, breached the Great Wall, defeated Li Zicheng, and conquered Beijing. Then the Qing Dynasty was established.

Most of the Ming Dynasty cultural sites are in Beijing and Nanjing. These two cities served as the capitals of the dynasty. Beijing was the capital for the final 224 years.

Our premier Beijing tour: Our 4-Day Essence of Beijing Tour covers the main highlights of Ming Beijing, including the Forbidden City, the Great Wall, and the Temple of Heaven.