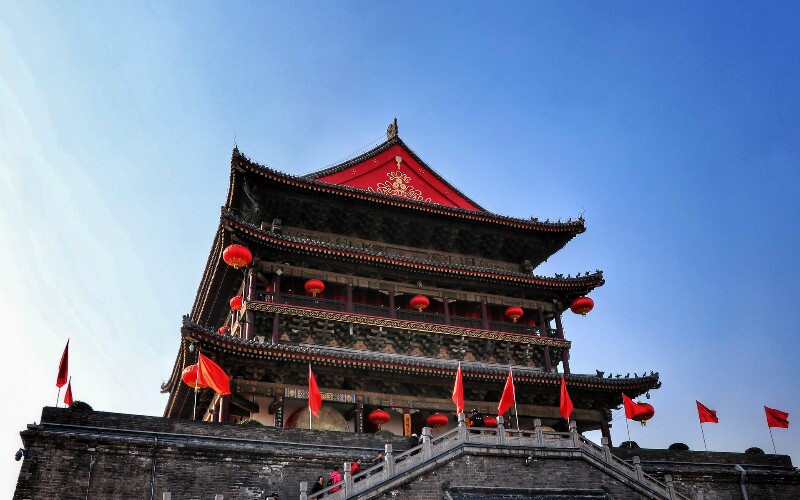 The two-story rectangular Drum Tower stands on a brick-structured pedestal of 52.6 meters (172 feet) long, 38 meters (125 feet) wide and 7.7 meters (25 feet) tall. It’s a classical building crowned by a hipped-roof with three-layer eaves, and a 6-meter (20 feet) tall and 6-meter (20 feet) wide arched gate is opened in the south and north of the tower.

Above the first story, it is decorated with a waist eave. The second story is decorated by green glazed tiles. A horizontal inscribed board hangs below the south and north sides of the third-layer eave, which reads "Civil and Military Resort" (Wen Wu Sheng Di written by Zhao Kehuai in 1580) and "Sound Heard by Heaven"(Sheng Wen Yu Tian written by Li Yun) respectively.

Xi'an Drum Tower has been renovated several times since the 1950s, and the Xi’an Municipal Government decided to make a huge drum in the Drum Tower to develop the tourism industry in 1996. The new drum is 1.8 meters (5.9 feet) tall and weighs 1.5 tons with a surface diameter of 2.83 meters (9.28 feet).

It is decorated with 1,996 studs and four bronze rings, and the 1,996 studs symbolize the year of 1996. Now, 28 drums of various sizes are retained in Xi'an Drum Tower, including 24 small ones and 4 big ones. The surfaces of the 24 small drums are decorated with the traditional Chinese 24 solar terms.

The Drum Tower faces the Bell Tower across Zhonggulou Square, in the north of which is the famous Muslim Quarter, and they're all ideal places for the locals and foreigners alike to relax themselves.