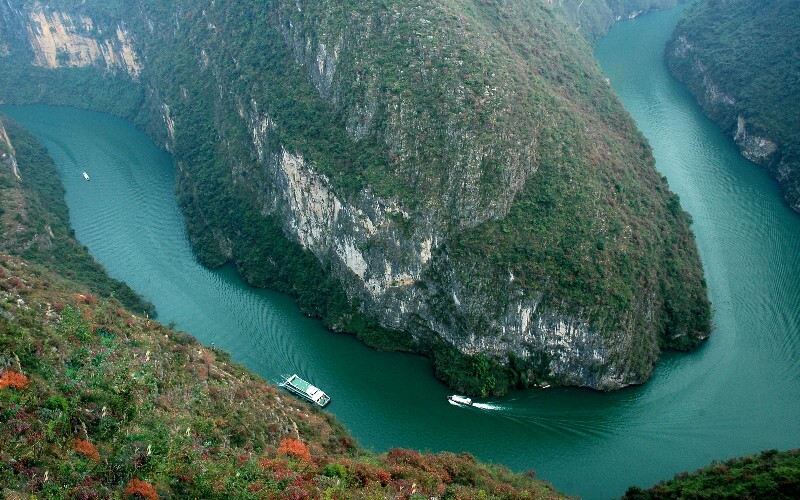 The Three Gorges on the Yangtze River

Wu Gorge is also about 40 km long, and joins Xiling Gorge at the county town of Badong (/bar-dong/ literally: 'east of East Sihuan and Chongqing', just over the border in Hubei Province).

The crystal clear waters, suspended walkways, and hanging coffins of Shennong Stream draw tourists for mini-cruises to explore this side attraction.

Sanyou Cave (/san-yo/ 'three travellers'), where three famous ancient poets are said to have stayed, is the best cave in the Three Gorges area. Sanyou Cave is about 10 km (6 mi) from Yichang on Xiling Gorge.

The Three Gorges were once a dangerous stretch of the river, nevertheless frequently used for shipping, with the inland industrial center of Chongqing as the hub.

Since the construction of the Three Gorges Dam (structurally complete in 2006) the river level has been raised by up to 180 m (590 ft), and the river has become much quieter and more navigable.

Cruise ships now travel between Chongqing and Yichang on placid, lake-like waters, enclosed by steep cliffs, giving passengers a better chance to see the beauty of the gorges.

The Map of the Three Gorges