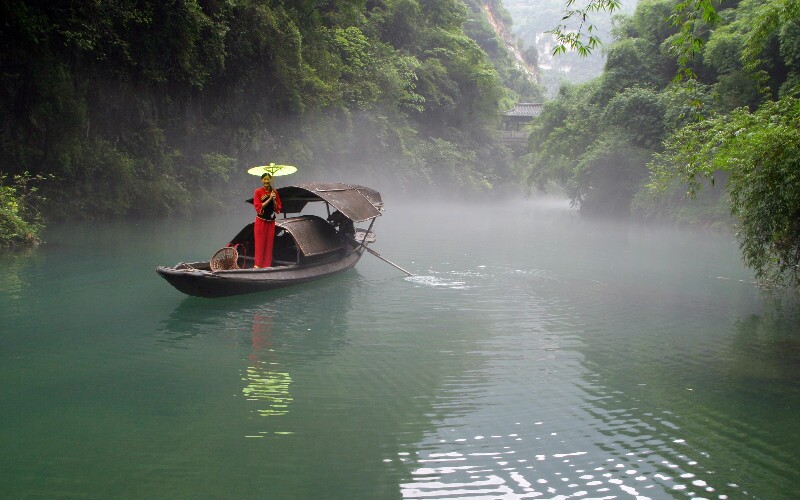 The Lesser Three Gorges, travelling upriver from the Yangtze, are called Longmen Gorge, Bawu Gorge and Dicui Gorge. Passengers often transfer to a smaller sightseeing ship at the mouth of Daning River for cruising upstream.

It is very obvious that the river water of Daning River is emerald green compared to the light green of the Yangtze River. Mist–wreathed mountains along Daning River are covered with lush green flourishing vegetation, much of which is one of the specialties of Wushan County, called Cloud and Mist Tea. This kind of tea is required to be planted on cliffs in a cloudy and misty environment. There are often troops of monkeys appearing at the river bank and on the trees of the mountains.

Besides the natural beauty, there are many historical sites along the Lesser Three Gorges, among which the most notable ones are the Hanging Coffins and a plank road built along the cliff.

The entrance to Daning River at Wushan Town is about 500 km (300 miles) northeast, down the Yangtze, from Chongqing City and about 200 km (130 miles) upriver from Yichang, in Central China. The Lesser Three Gorges stretch 25 kilometers (16 miles) from north to south, and form the lower reaches of Daning River, in Wushan County, Chongqing. Bawu Gorge, stretching ten kilometers (6.2 miles), is famous for its grotesque mountains and over-2000-year-old Hanging Coffins. Hanging coffins was an ancient funeral custom of some minority groups, especially the Bo people of Southern China. The Hanging Coffins of the Three Gorges region were mostly made with one whole piece of wood and sit on natural rock projections on mountain faces. Seeing the hanging coffins, passengers may not be able to help asking: Why did the ancient people bury the dead in hanging coffins and how did they do this? These have been mysteries about the Hanging Coffins for centuries. Listening to the guide telling the story of the Hanging Coffins while passing through the gorge can be really interesting.

Dicui Gorge is the longest and most graceful of the Lesser Three Gorges, stretching 20 kilometers (12 miles). The word Dicui means 'emerald green' in the Chinese language. The vegetation of Dicui Gorge is the most flourishing and the best protected among the Lesser Three Gorges. On a quite day a trip through here in a small sightseeing ship can be an impressive and peaceful experience.

At the end of Dicui Gorge, passengers will see a branch of Daning River, called Madu River. There are three gorges smaller than the Lesser Three Gorges, called the Mini Three Gorges, namely Sancheng Gorge, Qinwang Gorge and Changtan Gorge. A side trip is offered through the Mini Three gorges. The gorges are too narrow for a sightseeing ship. Passengers take a small mat-covered wooden boat to travel through the gorges. As passengers are much closer to the water and the river is much narrower than in the Lesser Three Gorges and the Three Gorges, the Mini Three Gorges seems even more lofty, deep and serene. The enchanting scenery, fair-sounding folk songs of local fishermen and agreeable gorge breeze will transport you far away from the hustle and bustle of the city and much closer to nature.