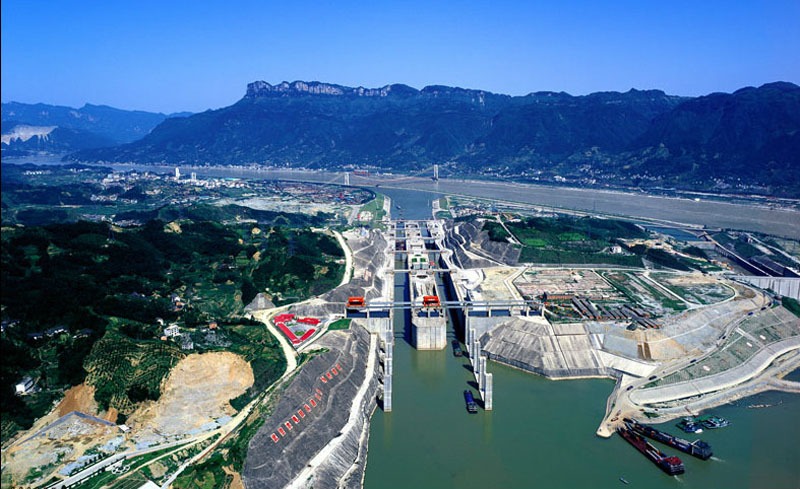 The Three Gorges Dam Project was completed in 2009. Situated at Sandouping Town of Yichang City, Hubei Province, the Three Gorges Dam is the largest hydro-power station in the world with an annual energy output of 84.7 billion kilowatt-hours. The Three Gorges Dam includes three areas: the dam itself, a hydroelectric, and a system of locks. The height of the Three Gorges Dam is 185 meters (607 ft) above the sea level. The dam is about 2,300 meters (7,546 ft) long and about 115 meters (377 ft) wide. With a water capacity of 39.3 billion cubic meters, the dam will hold a huge reservoir which will efficiently prevent flooding in the middle and lower portions of the Yangtze River.

The 1,000-square-kilometers (386 square miles) reservoir is an artificial lake showing visitors a picturesque view in sunny days that the wide blue lake and the vast azure sky merge at the horizon. The dam would discharge flood during the flood period (July and August), if you are just visiting the Three Gorges Dam at that time, you will enjoy the marvelous spectacle of flood discharge. In July 2010, the flood peak arrived Three Gorges Dam with the speed was 36,000 cubic meters per second, the dam opened 9 spillways to release the flood, so as to function in an emergency. Through the 9 spillways, shot forth 9 water columns (50-meter or 164 ft long) in the water mist. At last, they turned into whitecap and disappeared in the waves.

There are two good places to watch the dam. 185 Platform gets its name because of its height–185 meters (607 ft), equivalent to the height of the dam. Dam Viewing Point is the best position to have a view on the dam and the marvelous spectacle of flood discharge.

As a modern wonder, the Three Gorges Dam together with Gezhou Dam form a new landscape adorning the Yangtze River together with other natural scenery (like The Lesser Three Gorges, Wu Gorge and Shennong Stream), ancient relics (such as White Emperor City and Qu Yuan Ancestral Temple).

It has taken 17 years to complete the entire project including three stages, from 1993 to 2009. During the first phase (from 1993 to 1997), the main channel of the Yangtze River was blocked and its water diverted into a side channel, so that the dam construction could take place. The second phase lasted 6 years from 1998 to 2003. During this period, the work was focused on constructing the cofferdam (a temporary barrier that keeps water out of a normally submerged area), the locks, and the hydroelectric plant. By the end of 2003, the first and the second phases had been successfully completed. During the third phase (from 2003 to 2009), the installation of all machinery, the construction of the power station and the dam on the right bank were finished.

Of course, the construction of the Three Gorges Dam Project has brought a huge controversy relating to economic, technical, environment, migration, tourism and the protection fields. The construction of the dam has flooded archaeological and cultural sites and displaced some 1.3 million people, and is causing significant ecological changes, including an increased risk of landslides. Hence the dam has been a controversial topic both in China and abroad.

Till today, we need to face the benefits as well as the problems from the Three Gorges Dam Project. For one hand, it brings many benefits such as flood control, power generation, navigation and tourism; for another hand, it also causes some problems like sediment problem, environmental problem, migration problem, and landscape losses.