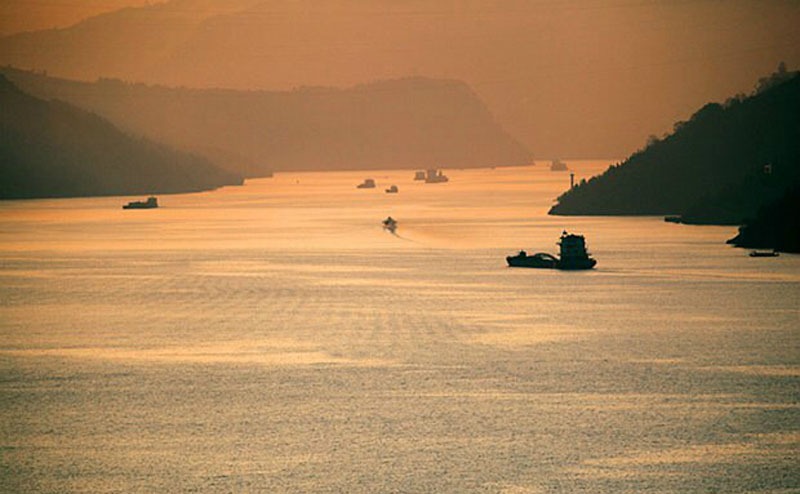 Gezhou Dam, which lies within the municipal boundaries of the city of Yichang, Hubei Province, is situated in the Xiling Gorge. When completed in 1980, Gezhou Dam was China’s largest hydroelectric dam, controlling a water volume corresponding to roughly half of the Yangtze’s total capacity.

Gezhou Dam is 2561 meters across, 70 meters high, and has a depth, or wall thickness, of 30 meters. Gezhou Dam was an enormous construction project, as its dimensions indicate, that attracted worldwide attention and boosted the tourist industry of the area, and even though the Three Gorges Dam itself is a much more stellar project, it too belongs to the same overarching power-generating and flood-control plan for this part of the Yangtze River as Gezhou Dam itself.

Gezhou Dam's status as China's largest hydroelectric dam has of course been definitively toppled with the completion of the Three Gorges Dam in 2007, as the latter is now not only China's largest, but the world's largest hydroelectric dam. Still, as part of this fascinating stretch of the mighty Yangtze River, Yichang's Gezhou Dam and nearby Xiling Gorge will forever remain noteworthy tourist sites.

The major components of Gezhou Dam are its power stations and its shiplocks and sluices for permitting the passage of ships up and down the Yangtze. There are shiplocks for the usual variety of tonnage categories, i.e., from those for lighter craft to those designed for the passage of heavy ships carrying massive loads. Gezhou Dam generates 15.7 billion KWH of electricity annually, divided over two power stations and 21 generators. One of the power stations straddles the river's main flow, or stream, while the other straddles the river's secondary stream.

The dam project, which, in its time, took 10 years to complete (1970-1980), involved the removal of over 113 million cubic meters of earth and stone, which, to put it into more graphic terms, is enough earth and stone to construct a large mountain.

As a grandiose project that attracted worldwide attention in its time, Gezhou Dam, with its magnificent floodgate, remains a compelling image to behold as the massive flows of the Yangtze spill over the dam's turbines, creating roiling torrents that roar with the sound of thunder. The violent force of these frothy water masses as they spill over the dam is contrasted by the utter tranquility and serene beauty of the landscape behind the dam, where some species may have suffered decline but where others have most certainly seized new opportunities.