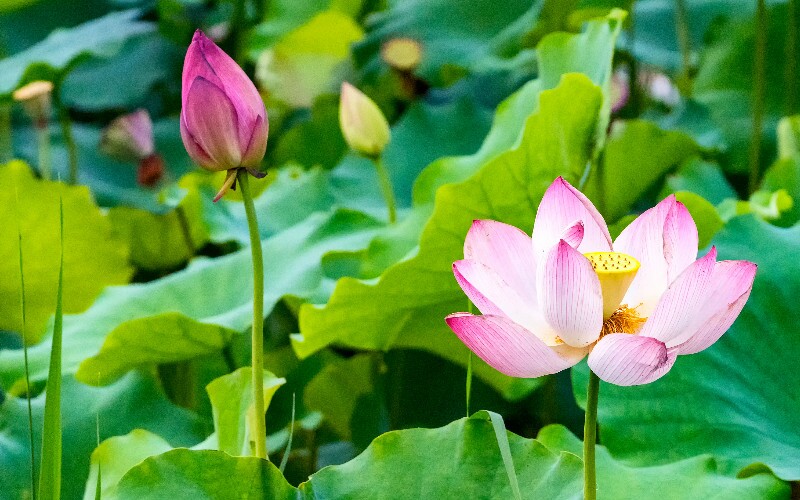 Solar terms are a Chinese conception of the seasons and a product of the tireless exploration of the natural sciences by Chinese people's ancestors.

'Summer solstice' is one of the most important solar terms in traditional Chinese culture and the first one to be identified as a solar term. It now generally occurs on June 21st or 22nd in the Gregorian calendar.

In north China, at the summer solstice, daytime is much longer than nighttime, but in the tropical south the difference is only about 2 hours. The length of daytime reaches 15 hours in Beijing and 17 hours at higher latitudes.

The Origin of 'Summer Solstice'

'Summer Solstice' is the fourth solar term of 'summer', which, in its original form, was a solar term extremely relevant to astronomy. This is because it marks the time when the sun ultimately shines perpendicular to the Tropic of Cancer.

After this day, the sun seems to move toward the south, thus decreasing the daytime length in the Northern Hemisphere with each passing day.

The two festivals represented Chinese cognition of astronomy and geography; that is, the sky being round and the Earth being square. Therefore, the festival to worship heaven on the winter solstice was held at the Circular Mound Altar in the Temple of Heaven, and the festival to worship Earth on the summer solstice was held at Fangze ('Square Pool') Altar, which was also called Fangqiu ('Square Mound') Altar or the Temple of Earth.

Besides the festivals, the ancient Chinese also took a holiday on the summer solstice. The holiday activities differed individually, but there was a unified activity: eating noodles.

The days around the time of the summer solstice are when wheat becomes ripe. Therefore, making noodles out of the wheat not only came in handy for the festival, but also allowed people to taste the new wheat harvest, which was a way of killing two birds with one stone.

For foodie Beijingers, particular attention is paid to noodles on the summer solstice. According to the custom upheld in old Beijing on every summer solstice, they feast on lettuce and cold noodles. This is because the hot weather means it's more palatable to eat cold foods.

During the summer solstice, noodle houses in Beijing win the love of the masses. No matter whether they make Sichuan cold noodles, Dandan noodles, braised pork noodles, or noodles with soybean paste, all kinds of noodles are very popular.

On the day of the summer solstice, people in Wuxi eat rice porridge in the morning and wontons at noon, representing chaos and harmony.

In areas around Laiyang County in east Shandong, new wheat crops become ready to harvest for the summer solstice.

In the past, in areas around Huangxian ('Yellow County', now named Longkou County, to the north of Laiying), people cooked the grains from the new wheat. Children in Huangxian would use wheat straw to make a delicate small hedge, and take the grains out to eat, which was also an interesting game providing great fun.

In areas around Pingyin County, in west Shandong, people commemorate their ancestors at the Summer Solstice.

At the Summer Solstice, Cantonese people like to cook all kinds of soup and porridge, such as pork ribs soup and millet congee, as well as herbal tea.