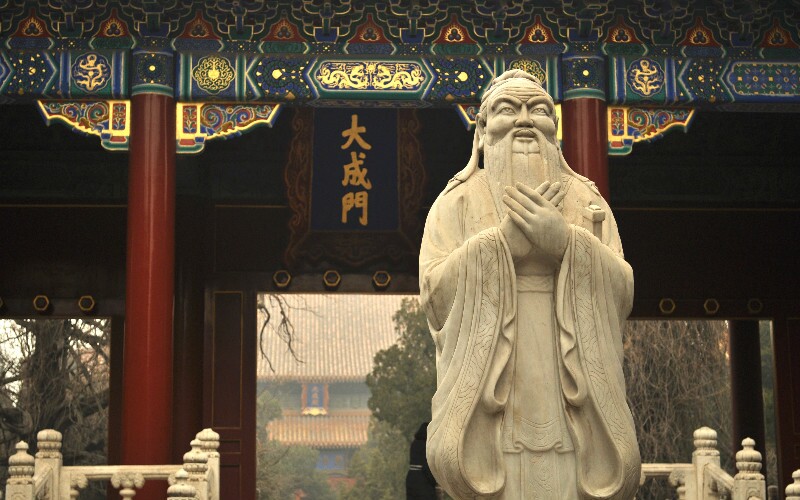 Guozijian, an imperial academy in Beijing

Ancient Chinese education began with classic works, namely, the Four Books and the Five Classics (Great Learning, Doctrine of the Mean, Analects, and Mencius; Classic of Poetry, Book of Documents, Book of Rites, I Ching, and Spring and Autumn Annals), regarded as cardinal texts that one had to learn, in order to understand the authentic thought of Confucianism. Beginning from the time of the Xia dynasty (2070-1600 BC), it was traditional for ancient kings and emperors to select well-educated officials to assist them in administering their kingdoms.

The civil service examination system for selecting officials was established by Emperor Yang (569-618 AD) of the Sui dynasty (581-618). It was further refined by Emperor Taizong (598-649) of the Tang dynasty (618-907). It was not until the late Qing dynasty (1644-1911) that the civil service examination system was dismantled by Yuan Shikai (1859-1916), and replaced by a more western education system. Since the foundation of the People's Republic of China in 1949, the Chinese education system has been modeled on the Russian system, with perhaps more spoon-feeding and rote-learning than in some other countries.

The History of Ancient Education

In primitive society, knowledge was passed on orally by elders to their children. As hieroglyphic writings emerged 3,000 years or so ago, professional institutions emerged aiming to teach knowledge. These were called chengjun, the predecessors of schools.

The Establishment of Schools

State schools were established just for children of the nobility; and consisted of elementary schools and higher-level colleges. Village schools, also known as local schools, were divided into four levels: shu, xiang, xu and xiao. Generally speaking, students who studied well in shu could enter the next level and proceed upwards. If determined and persistent, they even stood a chance of studying in college.

Jixia Academy was established in the State of Qi, in 360 BC during the Warring States Period (475-221 BC). The king at the time sought out able men (including Mencius, Hsun Tzu, Zou Yan and Lu Zhonglian) across his kingdom to lecture regularly on various topics, leading to 100 schools of thought contending with each other.

After the unification of the Qin Empire (221-206 BC) in 221 BC, Qin Shi Huang (the first emperor of China, who reigned from 259-210 BC) forbade private schools of any form in his kingdom, so that he could exert strict control over the common people. Following the advice of Li Si, secretary of the Qin Empire (221 BC-206 BC), Qin Shi Huang ordered the promulgation of legalist education. He forbade the common people to read privately or collect Confucian classics, and he even gave orders to burn books and to bury Confucian scholars alive.

Emperor Wu (156-87 BC) of the Western Han dynasty (206 BC-9 AD) established government-sponsored imperial colleges, and teachers were selected from among learned and accomplished officials, who were called boshi (present-day doctors). The chief boshi was given the title pushe in the Western Han dynasty (206 BC-9 AD) and jijiu in the Eastern Han dynasty (25-220 AD). Students from the imperial colleges were called boshi disciples. The number of boshi disciples (roughly equivalent to present-day college students) reached over 30,000 during the Shundi Emperor's (115-144 AD) reign.

Emperor Wen, Cao Pi (the son of Cao Cao), who reigned from 220 to 226 AD, developed further the imperial college system in Luoyang in 224. The Imperial Academy was established by Emperor Wu (Sima Yan reigning from 236 to 290) during the Western Jin dynasty (265-317), and it was explicitly stipulated by Emperor Hui (259-307) that only children of 5th-rank officials or higher were allowed to study in the Imperial Academy. The Confucian Academy was established by Emperor Wen (422-453) in 438 AD, in a suburb of Jiankang (presently Nanjing of Jiangsu Province), followed by the Metaphysics Academy, History Academy and Literature Academy.

Ancient official school education refers to a whole set of education systems sponsored by central and local governments of slave and feudal societies. It aimed to train talent of various kinds for the ruling classes, whose rise and fall was related to social and political developments in ancient China.

Guozijian were established by Emperor Yang in the Sui Dynasty (581-618), and served as educational institutions until the Qing Dynasty (1644-1911).

Ancient local official schools started with Shujun Academy established by Wen Ong (156-101 BC) in the Shu Prefecture (presently Sichuan Province) during Emperor Jingdi's (188-141 BC) reign of the Western Han dynasty (206 BC-9 AD). Other prefectures across the country soon opened their own schools.

Over against the ancient official school education, ancient private school education also played an important part in the educational history of China. It was first initiated by Confucius in the Spring and Autumn Period (770-476 BC) and exercised a great influence on the Chinese people.

The Spring and Autumn Period (770-476 BC) and Warring States Period (475-221 BC) were periods of transition from a slave society to a feudal society, during which education went through dramatic changes along with the prevailing economic and political situations. Ancient private schools emerged under such circumstances. Scholars served different rulers and created various schools, among which the most famous included the Confucian School, Mohist School, Taoist School and Legalist School, leading to the phenomenon of 100 schools contending with one another to dominate the realm of thought.

Confucius (551-479 BC), the founder of the Confucius School, gave lectures on ethics in Qufu (Shandong Province) during the Spring and Autumn Period (770-476 BC), and Mo-tse (468-376 BC), the founder of the Mohist School, discoursed on politics in Jixia Academy of Linzi (in Shandong Province) during the Warring States Period (475-221 BC). They both had a substantial influence on traditional Chinese culture, especially Confucius.

As mentioned above, however, Emperor Qin Shi Huang (259-210 BC) forbade private schools, burned books and even buried Confucian scholars alive.

Emperor Wu (156-87 BC) of the Western Han dynasty (206 BC-9 AD) carried out a policy of proscribing all non-Confucian schools of thought and espousing Confucianism as the orthodox state ideology, but private schools were permitted during his reign.

Private schools overwhelmed official ones during the late Eastern Han dynasty (25-220), and a number of Confucian-classics masters, such as Ma Rong and Zheng Xuan, recruited disciples widely and trained lots of talent. The study of Confucian classics emphasized textual research of names and objects, later known to the world as sinology.

Although official school education was on the wane, private school education prospered during the Wei (220-265), Jin (265-420), and Northern and Southern (420-589) dynasties. Private education broke out of the mold of traditional Confucianism, and it also included metaphysics, Buddhism, Taoism and technology.

The civil service examination system for selecting government officials was established and came into force during the Sui dynasty (581-618). It not only served as an education system, but as the standard of selection for talented people across the nation.

The system was improved during the Tang dynasty (618-907). Some scholars from poor and humble families held office at court, greatly easing the class discrepancies in society. During the Tang dynasty (618-907), the national examination system played a substantial role in training qualified officials and promoting cultural prosperity, and it was adopted as a legacy by subsequent feudal rulers.

During the Song dynasty (960-1279), it was a national policy to emphasize literature and restrict military force. The Song emperors inherited the national examination system and ordered the establishment of many famous academies throughout the kingdom, such as Bailudong, Yuelu, Yingtianfu, and Songyang (see below). These academies perfectly combined educational activity and academic research, and led to the publication of many famous books, including Three-Character Scripture, One Hundred Family Names, One Thousand Character Primers and Golden Treasury of Quatrains and Octaves.

Unlike during the Song dynasty (960-1279), the Mongolian ruling classes of the Yuan dynasty (1271-1368) took strict control over academies, for fear that the Han people might unite and rebel. The rulers of the Ming (1368-1644) and Qing (1644-1911) dynasties exerted more control over the thoughts of the common people. During this time the national examination system became ossified, and scholars were even persecuted due to ‘heretical ideologies’.

Built in 940 and expanded by Zhu Xi (1130-1200) during the Song dynasty (960-1279), Bailudong Academy was the cradle of neo-Confucianism. It has become a famous attraction on Mount Lu in Jiangxi Province, owing to its picturesque location at the foot of the Five Old Man Peaks of Mount Lu, about 30 kilometers from Jiujiang.

Songyang Academy is at the foot of Songshan Mountain, 3 kilometers north of Dengfeng town, in Central China's Henan Province. The academy was built during the North Wei dynasty over 1,500 years ago.

In addition, Jiangnan Gongyuan (Jiangnan Examination Hall) in Nanjing and Beijing Guozijian (Imperial Academy) are famous historical heritages of ancient Chinese education, and China Highlights can tailor-make a private tour to any of these ancient Chinese academies.