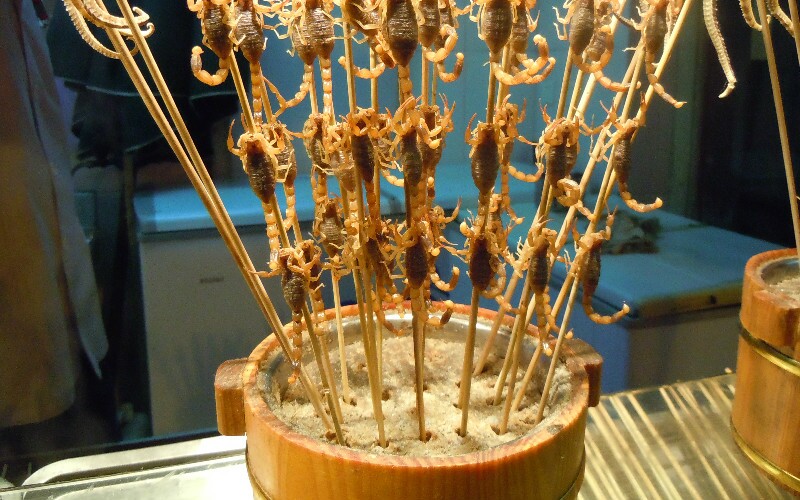 Unusual Ingredients in Chinese Cooking Which May Shock You

Snakes are eaten in China.

Chinese people can have an exaggerated view of how difficult it is for foreigners to adjust to the local food. A not uncommon question asked of the visitor is "Can you eat Chinese food?" and they don't just mean holding your chopsticks.

Generally, however, Chinese food is fairly straightforward, even familiar. Though there are some big differences with your local Chinese takeout.

There are few strong sauces, though some areas go a little heavy on the chilli peppers. Most of the ingredients are recognizable, though herbs tend to be notable in their absence. However, that's not to say there aren't a few surprises that can pop up over lunch, so China Highlights hereby presents you with some things to watch out for... and some other things to avoid.

Watch out for the small bones in your pigeon soup!

We may be used to eating meat off larger bones and, indeed, in the north west of China they love it as much as we do, but for most people in China, bones are an essential ingredient for many a meal and can make eating it an ordeal. Chicken, duck, pork and other meats are often cut so the bones shatter, and it can be difficult for the tongue to navigate its way around the shrapnel that comes with that tasty mouthful of meat.

This can be frustrating until you realize why. First, the Chinese believe the meat nearest the bone to be the best, so the meagre meat those bones offer is deemed to be of the highest quality. Second, and perhaps more important, by cutting the bones in this way the marrow is released to mix in with the sauce. In China, nothing that is nutritious goes to waste. It's fine to leave the shrapnel on the table by your bowl or on your side plate; that is the Chinese way.

It is unusual for Chinese people to eat vegetables raw, and even those we may associate with salads such as lettuce or cucumber are far more likely to come to you boiled or fried than fresh and crisp. Alongside many familiar items, there are several local vegetables to look out for.

Bamboo shoots are common. You can see these growing in any stand of bamboo. Look towards the base of the plant for a thick outgrowth with a green, leafy covering. Cooked, these are crisp and succulent. Bamboo stalks may also be eaten, but these make for somewhat drier fare.

Lotus root may also be new to you. White with a very firm texture unless cooked for a long period, lotus root can be identified, (if not too finely cut), but its shape; circular with a hole in the center, surrounded by eight to ten larger holes. As with bamboo shoots, the taste and texture are not remarkably different from the stalks of lettuce leaves and should present no problem for the culinary explorer.

The same may not be said of bitter, (or winter), melon. Growing as a light-green cucumber-like gourd, when cooked it lives up to its name. It is so strongly bitter it will dominate any mouthful of food which includes it. This may be one to avoid unless you manage to develop a taste for it.

This turtle is being taken home live to be cooked.

China is famous for some meats many foreign visitors find problematic. The best known is dog. However, cats can join them on the menu, though these are more rarely eaten. Rarer still, (perhaps thankfully so), is rat meat. There is no need to worry you may eat such meat in error. These are considered speciality foods, and those restaurants that cook them are unusual these days. More troublesome to the tourist may be stumbling upon one of the fresh meat markets in which the meat is sold. They tend to feature in the larger markets so, should you find yourself exploring one, be wary of what you may find.

Still more specialized creatures for eating include such exotic delights as deep-fried scorpions, (to be eaten sting and all; the poison is destroyed in the frying process and the sting itself becomes crisp). If you like nuts – soft and squishy nuts, admittedly – then you may enjoy trying some species of insects, such as cicadas, which tend to have their taste. However, ants have a flavor very much their own. The acid in their bodies make them tangy, and the closest you may have come to their taste previously, unlikely as it may sound, is lime juice.

Considerably more. In your travels you may find yourself at a donkey-meat restaurant, sampling durian, (a large, green fruit that to most smells utterly revolting and is banned from many hotels), eating snake, drinking water buffalo milk, finding heads or feet on your plate or perhaps chewing on a pig's ear from a street-side stall.

At China Highlights we're dedicated to seeking out such specialties and can schedule them into a tailor-made itinerary suited to your most whimsical wishes. We can also arrange all transportation. Why not contact us and find out for yourself what we can come up with?