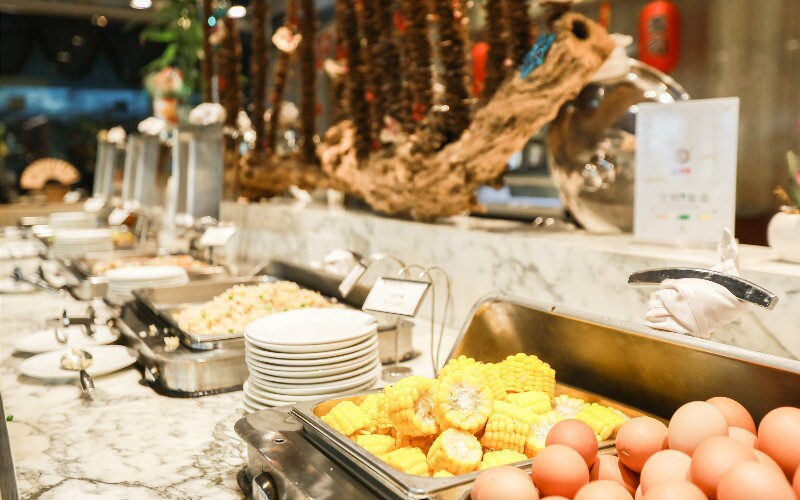 What to Expect from Hotel Breakfasts in China

The Chinese hotel breakfast experience is one many travelers enjoy taking advantage of on hectic mornings. It's the perfect way to fortify yourself for a long day of seeing the sights and attractions.

But knowing what to expect when traveling abroad is always a difficult task. That's why we've gathered everything you might want to know about hotel breakfasts in China. Come prepared for your visit and know what to expect from that morning buffet.

If you're planning to travel on a budget and stay in low to mid-range hotels while in China, you still have an excellent chance at having a complimentary breakfast included with your stay. While 1 and 2-star hotels and hostels will likely offer nothing or very little in the way of breakfast options, 3-star and above are considered reliable sources for complimentary breakfasts. However, what's on the table will vary by which part of China you are staying in and whether the establishment is used to catering to foreign visitors.

If you stay overnight at an un-starred rural guesthouse as part of your visit, you can expect very basic local offerings. In Beijing, and other parts of urban China, many low to mid-range hotels will be accustomed to serving tourists.

While a typical Chinese breakfast you might eat in someone's home is likely to include only traditional breakfast items, your hotel will likely feature some Western alternatives as well. Of course, the local options will change to reflect the local cuisine. Items you might find on menus all across China include:

This traditional Chinese dish is a popular favorite at the breakfast table and often features fruit for sweet flavors or meat for a savory option.

Rice is served with every meal in China and can be found in large pots on nearly every hotel breakfast buffet line.

These long sticks of dough are served warm and typically dipped into an accompanying glass of nut milk.

Steamed buns are a classic snack with a wide variety of fillings.

Steamed buns are a constant at most Chinese meals, but can often be found at breakfast tables around the country. They may be filled with sweet fillings like red bean paste or egg custard. They are also often filled with meats and vegetables.

At your typical Chinese hotel, you can expect to see a number of options for your morning beverage. Traditional drinks like corn juice, milk tea, and almond milk will often be featured. As well as the Chinese staple of hot water, which is served free of charge. There may also be an assortment of teas, sodas, and fruit juices available.

For the high-end traveler, the breakfast options available in China are much more varied and Westernized. Traditional items as discussed above will likely still be on the menu, but you can expect to see some imported items alongside them as well.

The main differences between 3, 4, and 5-star hotels are determined by hotel chain and location. Certain chains, such as Hyatt and Marriott, will offer imported options of a fine quality alongside local options. A Chinese establishment, even at the 5-star level, is more likely to serve local delicacies than strictly imported.

Again, where you are geographically in China and the presence of Western cultures impacts the types of breakfast food you are likely to see.

In the former British colony of Hong Kong, you can expect to find a full English breakfast at most high-end hotels. Beans, biscuits, currant jam and other British breakfast favorites will often feature on the breakfast offerings.

Beijing has become such an international city that you can find just about any type of breakfast you would like depending on which hotel chain you stay with. American owned hotels are sure to feature your favorite cereals, yogurts, bagels, and more alongside the traditional Chinese options.

In Shanghai, it is much the same as in Beijing. The city has such a wide variety of international connection it is easy to find just about anything you could want. However, being closer to the coast may offer a few differences in the way of fresh seafood options. Seafood congee for instance, is a traditional Shanghai breakfast.

Due to the strong Russian influence in areas of northern China, such as Harbin, you can expect breakfast here to look a little different. At high-end hotels, you might find various Russian soups and sausages included on the breakfast menus or buffet.

Depending on the amount of foreign influence, hotels in southern China will vary in their breakfast settings. While you can expect to find local southern cuisine at 3-5 star hotels of international origins, the imported meals from home can also be expected.

No Breakfast Offered? No Problem

In the event that your hotel does not offer a complimentary breakfast option, don't panic. It's easy to locate a quick and easy alternative in every major Chinese city. The infiltration of Western fast-food establishments such as Starbucks, Costa Coffee, and McDonald's makes it easy for tourists to find a breakfast item they know and love.

If you're upset about missing out on a traditional Chinese breakfast, there are still options. Street vendors are easy to find in pedestrian areas during the morning hours and sell traditional breakfast items from their carts. Even some Western restaurants have taken steps to include more traditional options on their menus. You can try a green tea scone at Starbucks or sample fried dough sticks and warm milk tea at McDonald's.

Plan Your Visit To China

Looking to experience a traditional Chinese breakfast and all the rest that China has to offer? Have a look at our tours and see the wonders of China for yourself. We offer custom tours for travelers looking for a personalized vacation experience. Contact us today and plan your adventure of a lifetime.