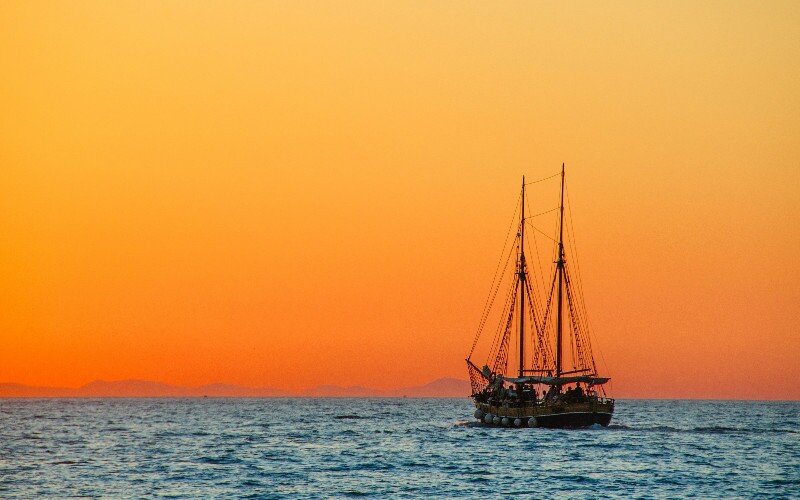 Zhen He's Voyages to the West

Zheng He (or Ma Sanbao) (1371-1433 AD) was a court eunuch, marine explorer and fleet admiral, born into an adventurous Muslim family in Kunyang of Yunnan Province. His grandfather was a noble from the Mongolian tribe and once made a pilgrimage to Mecca. Ma Sanbao had an elder brother and two sisters. His parental family was greatly respected in Kunyang for its pious religious beliefs.

The Ming Army attacked Yunnan in 1381, and the eleven-year old Ma Sanbao was captured, castrated and brought to the palace of the Prince of Yan (later the Yongle Emperor) to serve as a eunuch.

In the battle of Zhengzhou (presently Renqiu of Hebei Province), Ma helped the Prince of Yan, Zhu Di, to seize the throne of Emperor Jianwen. As a reward after ascending the throne, Zhu Di bestowed the imperial surname "Zheng" on Ma Sanbao; hence the name Zheng He.

Between 1405 and 1433, under Emperor's orders, Zheng He led seven expeditionary ocean voyages to western countries. This was a great feat in the history of Chinese marine navigation, in recognition of which the title Sanbao Eunuch (Three-Protection Eunuch) was conferred on Zheng in 1431.

Zheng He left on his 1st voyage in 1405 with a fleet of 240 ships and visited over 30 states along the coasts of the West Atlantic and Indian Oceans. His visits helped to strengthen relations between China and countries in Southeast Asia and East Africa. Zheng's 7th voyage was cut short in 1433 owing to his death at Guli in India. He and his crewmen had traveled as far as the Red Sea and the East African coast.

On September 13th, 1407, only 11 days after his return from the first voyage, Zheng left with his fleet for a second time. During this trip he visited Champa, Java Island, Siam (presently Thailand), Malacca, Cochin, Ceylon (presently Sri Lanka) and Calicut.

In July 1409, on his return voyage, Zheng made a special trip to Ceylon and erected a monument at Mt. Ceylon Temple to commemorate the voyage. It was estimated that over 27,000 crewmen had joined in the voyage.

In September 1409, Zheng left with a fleet of 48 ships from Liujiagang, Suzhou in Jiangsu Province, on a third voyage to the West. This time he visited Champa, Java, Malacca, Semudera, Ceylon, Quilon, Cochin, Calicut, Siam, Lambri and Kayal (namely, present-day Vietnam), Indonesia, Malaysia and India. On July 9th, 1411, Zheng was presented with relics from the Buddha via Ceylon, while on his way home.

Over 27,670 crewmen were enrolled on Zheng He's fourth journey to the West, which departed in November 1413. They made a detour round the Arabian Peninsula and sailed as far as Mogadishu and Malindi (presently in Kenya). On July 8th, 1415, Zheng and his fleet returned home. At that time, an envoy from Malindi presented giraffes to the Ming emperor.

Zheng's fifth voyage to the West started at Quanzhou (presently in Guangdong Province) in May 1417 and ended at Ma Lam (an ancient kingdom in an East African country) via Champa and Java Island. Zheng sailed home on July 17th, 1419. On his return, the Aden Kingdom presented unicorns, Maldive lions and Barawa ostriches to the Ming emperor.

In the 22nd year of the Yongle period (1426), the Yongle Emperor passed away, and Zhu Gaozhi (later known as the Renzong Emperor) ascended the throne. Zhu stopped Zheng's voyages to the West, owing to bankruptcy.

On December 6th, 1431, Zheng He set sail towards the West for a 7th time, from Longjiangguan (presently Xiaguan in Nanjing, Jiangsu Province). He died from overwork in 1433, on the homeward voyage. The fleet was then led by another eunuch, Wang Jinghong, and returned to Nanjing on July 7th, 1433. The number of crewmen on that voyage was 27,550.

Zheng He's travels to the West were unprecedented in their scale and scope. Zheng made a great contribution to friendly relations between China and the rest of the world in the spheres of politics, economy and culture.

Zheng's travels to the West turned a new page in the history of world marine navigation, 87 years before Christopher Columbus discovered America, 92 years before Vasco da Gama discovered the Cape of Good Hope and 114 years before Magellan sailed around the globe.

In China, Zheng He is regarded as an outstanding diplomat and navigator. His travels to the West made a great impact on world history, for which he is justifiably renowned.