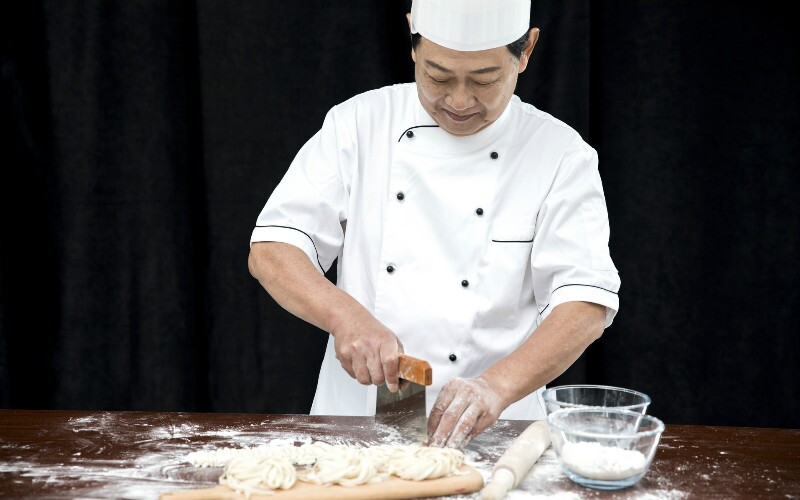 Chinese cooking is renowned throughout the world. Chinese food has a distinctive culinary style all of its own. The emphasis is on fresh, seasonal ingredients, prepared with a minimum amount of fuss and beautifully balanced as far as color, texture, and presentation are concerned.

There are several cooking methods. All seek to preserve the flavor and nutrients. Each of the techniques is briefly described below.

The cooking utensils are a wok and wok spatula. Stir-frying is typically done on a gas stove, although an electric stove can be used if preheated to a high heat.

Ingredients That Can be Cooked in This Way

Stir-frying typically uses a combination of meat or seafood, vegetables, and tofu. All ingredients are thinly sliced or cubed. The meat or seafood is marinated using soy sauce, salt, and other seasonings.

1. All ingredients should be ready prior to heating up the wok. (The food to be cooked should be finely sliced or shredded into similar sized pieces using a very sharp knife or Chinese cleaver.)

2. When the wok is hot, a small amount of oil is added.

3. The meat or seafood is quickly stirred and turned until semi-cooked. It is then removed from the wok and set to one side.

4. More oil is added to the wok, if necessary. The vegetables and/or tofu are added and quickly stir-fried.

5. The meat or seafood is added back midway through cooking, the seasonings are adjusted if necessary, and the dish is stirred until done. It should be served immediately.

Deep-frying is used to produce crisp-textured food. It is usually used to fry a variety of meats and vegetables in oil heated to a high temperature.

Deep-frying is done with a deep saucepan or a deep fryer, a Chinese scoop strainer (used to contain foods in a deep fryer and to strain foods when removed from the oil), and long chopsticks.

Steaming is a method of cooking using steam. It is considered to be the healthiest cooking technique.

Steaming can make dishes taste more fresh and delicious. It can retain various nutrients in the food and reduce nutrient loss to a large extent. Therefore, it is widely used for cooking a variety of ingredients.

Chinese people steam food by using bamboo steamers, which can be stacked one on top of the other, allowing several kinds of foods to be cooked at once, thus saving time and fuel.

The most famous examples of steaming are dim sum, dumplings, buns, and steamed fish.

Red stewing is a unique Chinese cooking technique, used primarily for cooking a tougher cut of meat or poultry.

The food is cooked very slowly over a low flame. Meat is usually browned first, then large quantities of soy sauce, sugar, wine or sherry, ginger, five-spice powder, chili powder, cilantro, and other seasonings are added, together with water or broth.

It may take up to several hours before the meat is done to the desired tenderness. The finished product can be served hot or cold. The sauce is rich and dark brown; hence the descriptive name “red stewing”.

The most famous examples of red-cooking are red-cooked spare ribs and red-cooked fish.

For red-cooking you need a stew pot, or a slow cooker.

Boiling is considered to be the simplest among all the Chinese cooking techniques. This method of cooking is quicker than other techniques and it preserves the color, texture, shape, and nutrients of the food.

Ingredients are washed and cut first, then plunged into boiling water or broth. When they are fully cooked, they are drained immediately, and then they are served with seasonings, or finished using other cooking techniques.

Boiling is mainly used for cooking small-sized and soft ingredients. For example, vegetables and vegetable soup can be cooked this way.

The cooking utensils used for boiling are a wok, long chopsticks, and a Chinese scoop strainer.

Many Chinese foods like chicken, duck, a whole sheep, a sheep's leg, and a whole pig can be cooked in this way.

Usually, meat is prepared (cleaned, seasoned, and basted with cooking oil) then hung above a fire or placed in a very hot oven. The meat must be seared so that the skin tastes crispy.

When the meat has been roasted, it is then chopped, arranged artfully on a platter, and served with a sauce made from the meat drippings.

One of the most famous roasted dishes is Peking duck.

If you want to cook food by roasting it, you'll need an oven.

Braising involves adding ingredients, spices, seasonings, and a small amount of water or broth to a wok or a saucepan, boiling everything together initially at a high temperature, and then simmering it at a lower temperature for a long time (usually one hour or more).

The ingredients are usually cut into large-sized cubes or diamonds. Using this technique, all of the food is cooked thoroughly.

The most famous braised dishes in China include braised chicken with mushrooms and braised beef with potatoes.

If you want to cook food by braising it, you need a wok, saucepan, or stew pot.

Our customers learning cooking in Yangshuo

Want to learn to cook traditional Chinese dishes? China Highlights' tours offer you the opportunity. See our most popular food tours, which offer cooking classes as well as must-see attractions:

Or you can contact us and we can add the experience of learning to cook Chinese dishes to your China tours.