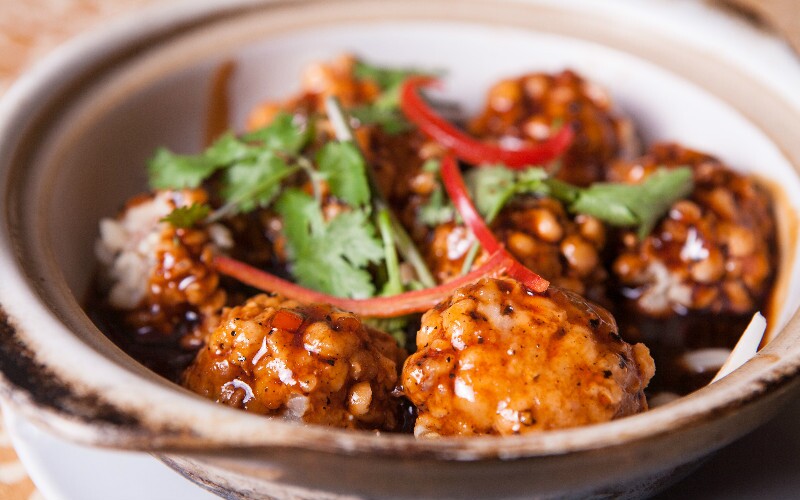 Seafood is a Shandong cuisine highlight

Shandong Province has a long coast, so fresh river fish and seafood were always the local delicacies.

Shandong was one of the first civilized regions in China and an early cultural center, so its cooking tradition set the style for the regions around it, especially to the north in Beijing and northeastern China. Now Shandong cuisine is relished for the many kinds of different seafood and vegetable dishes and their style of frying in high heat that locks in the flavors and isn't oily.

A wide variety of seafood are used to make Shandong dishes, and the people also like to eat pork. An ancient medical/science text describes the people in the area as relishing both fish and salt, and the people still do. Spices used: Shandong people like spices in the onion family such as green onions and garlic. They include onions in many dishes. Ginger is also commonly used along with a little red pepper. But spice is less heavily applied than in Sichuan cuisine. It is meant to accentuate the flavor of the food.

Condiments and Other Seasonings

Vinegar is heavily used and so is lots of salt. The province is known for its fine dark connoisseur kinds of vinegar that some people drink as a medicinal drink. Soy sauce is also used.

The Shandong chef's goal: Unlike other Chinese styles such as Sichuan style where the cook buries the food in a lot of spices and oil, the main aim of an authentic Shandong style chef is to preserve the cut, color, and taste of the main ingredients. So relatively little spice or sugar is used generally and the bao stir fry method is used often.

Extreme heat stir frying — "bao": Their chefs love to cook meat and vegetables in a wok over a big hot flame. They make the oil boil at an extremely high temperature and toss in the ingredients for a quick fry. This singes the outer layer and locks in the flavor. It also keeps oil from seeping into the food. They usually pour out the oil after the main ingredients are cooked, and then they will add spices, herbs, and seasonings, stir it quickly, and serve it hot. There is little residual oil on the food. This cooking method is called "bao."

Sometimes though, the oil will be part of the sauce that the food is served in. They may add flour, herbs and seasonings to the oil to make a tasty sauce.

Fried dough coating method — "pa": Another method of frying is to apply flour to a cut of meat and then stir fry it to make it crispy. Then they add a sauce to sauté it while stirring continuously.

Soup making: Clear broth and white varieties of soups are also popular. The white variety may contain milk or cream. The tradition of making soups stems from the western side of Shandong.

Healthy food: Since the main aim is to preserve the cut, color, and taste, the style of cooking preserves the nutritive value of the food. So the cuisine is generally healthy providing you eat wisely and don't overindulge in any particular food such as pork dishes or lobster. Steamed Wheat Buns are Commonly Eaten in the Shandong Region

Daily staples: The area lies along the border between the temperate north and the semitropical south, so both wheat and other temperate grains and rice are available and are daily cereals. Wheat noodles, steamed wheat bread and steamed pastries are commonly eaten and is the staple in many meals. Porridge made from oats, millet, and/or barley are also eaten. White rice is regularly eaten, and corn on the cob or fried corn is common. Their meals are sort of a combination between hearty and heavier northern Chinese regional food and light southern Chinese regional food.

The capital city of Shandong Province, Jinan, has Lu-style seafood restaurants. Here are our recommendations for restaurants in Jinan:

The restaurant is said to be one of the oldest restaurants serving Shandong style dishes in Ji’nan. Tender stir-fried scalloped pork kidneys (爆炒腰花) and fried carp with sweet and sour sauce (糖醋鲤鱼) are top dishes there. If you want to try authentic Shandong Cuisine, our tours can take you to authentic local restaurants.

chinese-food Articles on Chinese Food and Drink - Taste Something New!