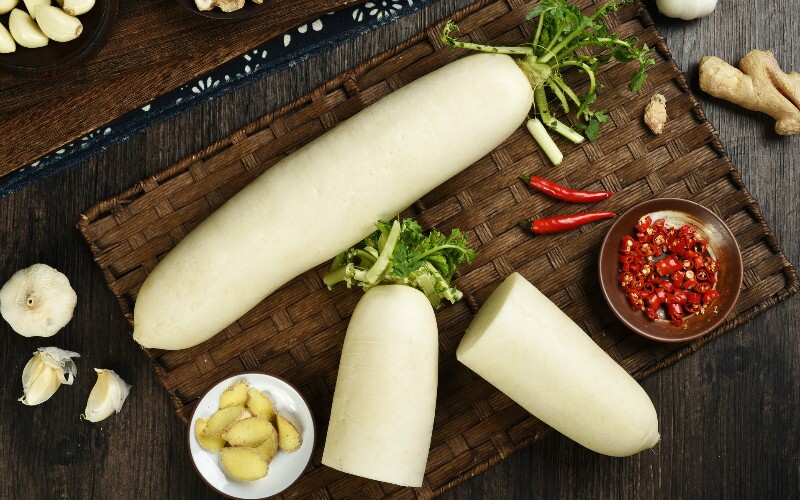 The Top 10 Vegetables Eaten in China...and How to Eat Them

China's 300,000,000 farmers grow about half of the vegetables eaten in the whole world. Much of what they eat is probably what you eat too, but there are a lot of vegetables you've probably never even seen.

Here are the 10 most common vegetables you'll find eaten in China and how you can eat them.

Dried/pickled snow cabbage and chili is made into something similar to Korean kimchi in some parts of China.

It is a leafy vegetable, also known as snow cabbage or napa cabbage, and is sold in big piles in the markets and very commonly eaten in soups, hotpots, and stir-fried.

It has a pleasant, robust, and hearty taste and is good for you. You can have these stir-fried with your choice of sauce and condiment.

This is also called Chinese cabbage in English like No. 1. But it looks quite different. It is green and smaller.

It has a sharper flavor than the bigger napa cabbage, and is used more sparsely in soups, hotpots and stir-fries. It is more commonly eaten in southern China.

Shredded potatoes in vinegar is eaten as an appetizer or side dish.

China is the world's largest potato producer. It is used in stir fries and soups.

It is a popular vegetable in the northeastern regions, Xinjiang, and in Sichuan where a favorite dish is stir-fried thin-sliced spicy hot potatoes.

Some are thicker and like those in the West, others are thin and long. The skin may have ridges or be smooth. They are generally not bitter and have a very pleasant, slightly sweet taste.

This is one Asian vegetable that perhaps most Westerners haven't eaten. These huge white radishes or daikons look like super-large white carrots instead of the little round red radishes you've had.

Like Chinese cabbages, you'll see them piled in Chinese markets. They are rich in calcium and vitamin C and are used in stir-fries and added to soups.

Soybean sprouts are simply sprouted soybean seeds. They are rich in vitamins A, B, and C.

Chinese usually eat these in stir-fries and soups, but you can also eat them raw in salads. People buy them at a market or sprout them at home. For the highest vitamin content, eat them raw.

Peanuts are more common in meals than in China than in the West where it is eaten more often as a snack food.

High in protein and quite filling for its size, they are eaten more often inland.

In Wuhan, it is mixed with red chili and used as a tasty topping in common noodle dishes, and in Sichuan, you can have it as part as the flaming hot fried kungpao chicken.

This common vegetable in Western cooking isn't used as often in Chinese cooking except in inland areas such as Xinjiang, Guilin, and Sichuan, but it rounds out this list of the top 10 vegetables.

China is the biggest producer of tomatoes growing a whopping 31% of the world's tomatoes, but much is exported. Nowadays, it is also popular in Western dishes such as hamburgers and pizza and is made into ketchup for use at McDonalds and other Western chains.

Bitter melon is known for its unusual appearance and taste. This Chinese gourd resembles a cucumber with a dark green, pockmarked skin.

As the name implies, it has a rather bitter taste. However, this can be lessened by blanching or degorging the melon with salt. Bitter melon is a popular ingredient in stir-fries, where it is frequently paired with other strong flavors.

Chinese believe it can slow the onset of alzheimer's and is anti-malarial, anti-cancer, anti-viral, great for your heart, and good for people with diabetes.

Would you want a trip to enjoy Chinese food? See our recommended Chinese food itineraries for inspiration:

Our tours can be customized. We can help you design a tour tailored for you.

For vegetarians/vegans: We will ensure that our tour guides order only the best vegetarian dishes for you during your holiday.