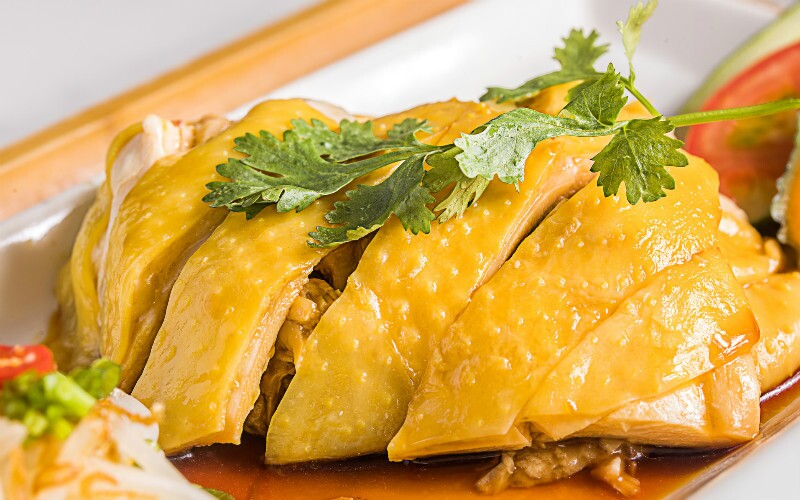 Cantonese or Yue cuisine originates from Guangdong Province (SE China around Hong Kong), and it is the most widely served style of Chinese cuisine in the world. This is because most of the Chinese who immigrated and set up restaurants overseas were from Guangdong. Though what's served abroad now has departed from authentic Yue cuisine.

A wide variety of foodstuffs are used to make Cantonese dishes. Therefore, it surprises foreigners sometimes. The saying "They eat everything with four legs except tables and everything that flies except airplanes" is an exaggeration. But dishes might contain snakes, cats, dogs and sea life not familiar to most foreigners. Keep that in mind when you are ordering something off the menu with strange Cantonese names.

An authentic Cantonese chef's goal is to preserve the food's original flavor. Unlike other Chinese styles of cooking such as Sichuan style where the cook buries the food in a lot of spices and oil, a Cantonese chef aims to bring out or highlight the original flavor of the vegetable, meat, or fruit. So little spice or sugar is used generally.

The result: The result of this cooking technique is to produce food that might seem bland or insipid to foreigners who are used to the overseas style of Chinese food where a lot more sugar and spice is used. It takes some time to appreciate the mild and distinct flavors of the meat, vegetables and fruit.

Not fattening: Unlike overseas Chinese food and some regional styles, a lot of oil or grease isn't used either. Neither are dairy products. So unlike creamy cheese wontons or a sweet and sour pork on rice meal deal at a Chinese fast food restaurant overseas, there are not a lot of calories in the dishes. This combined with the white rice or rice noodles that is the staple and the dim sum made with little or no sugar may leave a foreigner feeling hungry.

On the other hand, it makes for fine well balanced meals for dieters. If you are not dieting and still hungry, the solution is simply to eat more or order ice cream for desert if it is available.

Spices used: Chives, coriander leaves, anise, touches of black pepper, and slivers of ginger provide a mild tanginess that accentuates the flavor of the food. But unless the food in itself smells or tastes bad alone, just a little of these spices are used.

Condiments and Other Seasonings

Spices used: Chives, coriander leaves, anise, touches of black pepper, and slivers of ginger provide a mild tanginess that accentuates the flavor of the food. But unless the food in itself smells or tastes bad alone, just a little of these spices are used.

Steamed fish with slivers of ginger

Rice vinegar accentuates the flavor of vegetables, and a little salt does also. A pinch of sugar gives food a mildly sweet taste that is characteristic of many Cantonese dishes and snacks. A little sesame oil adds a mild tanginess too.

But if the food is delicious as it is, almost no seasoning is added. An example is fresh sea fish. It isn't served raw like Japanese sashimi, but to preserve and accentuate the delicious flavor, the Cantonese steam it and add just a little soy sauce, ginger or perhaps bits of chives. Like the Japanese, Cantonese delight in the natural flavors of fresh sea fish.

Stir frying and steaming are the two most common cooking methods. But stir fried dishes are not as common as in Sichuan. Cantonese like to boil soups, braise or roast meats, and sauté food too. These cooking methods are aimed to preserve the flavor of the dishes. There are also popular deep fried foods that are often eaten as snacks, deserts, or breakfast foods. See below for examples.

These dishes are often simple and easy to learn to cook, and they are widely served in Cantonese homes. They are also the most common foods on the menus of Cantonese restaurants (see below for a menu).

Chinese Steamed Eggs are made by beating eggs to a creamy consistency and then steaming. Variations are derived by adding different ingredients such as spring onion and soy sauce.

Although deep fried dishes are not the main stream of Guangdong dishes, there are quite a number of them which are popular around the region.

A youtiao (油条 /yoh-tyaow/ 'oil strip') is a long, golden-brown deep-fried strip of dough. Youtiaos are usually eaten for breakfast with soy milk.

Zhaliang (/jaa-lyaang/ 'fried two') is made by tightly wrapping a rice sheet around a youtiao (deep-fried dough stick). Zhaliang is widely eaten in Guangdong and Hong Kong. It is usually eaten with soy milk.

Shahe noodles (shahefen /shaa-her-fnn/) are a kind of rice noodles which probably originated from the town of Shahe that is now a part of Guangzhou. They are broad and white in color. Their texture is elastic and a little chewy. They do not freeze or dry well and are thus generally (where available) purchased fresh in strips or sheets that may be cut to the desired width. Shahefen is popular in Guangdong, Guangxi and Hainan in southern China.

is made by boiling salt-marinated chicken in water or chicken broth. When it is done, the chicken looks golden in color and tastes fresh and light, preserving the best of the original taste of chicken.

The famous white cut chicken served by Panxi Restaurant in Guangzhou is believed to be the most delicious. The restaurant has received the Golden Tripod of High Quality Production from the Department of Commerce for its Baiqie Chicken. See below for address.

Cantonese cuisine is famous in China and abroad and served all over the place. But the most authentic mild, freshly pungent, and not fatty or sweet Cantonese food is still to be had in the Guangdong and Hong Kong area. Whether it is high-class gourmet delicacies or everyday home-style food, you can find it in the region. Here are some suggestions:

This restaurant is famous for the Baiqie Chicken.

This Cantonese Restaurant became famed for its food, service, and scenic views and is considered among China's best restaurants and Hong Kong's best Cantonese restaurant.

If you want to try authentic Cantonese Cuisine, our tours can take you to authentic local restaurants.