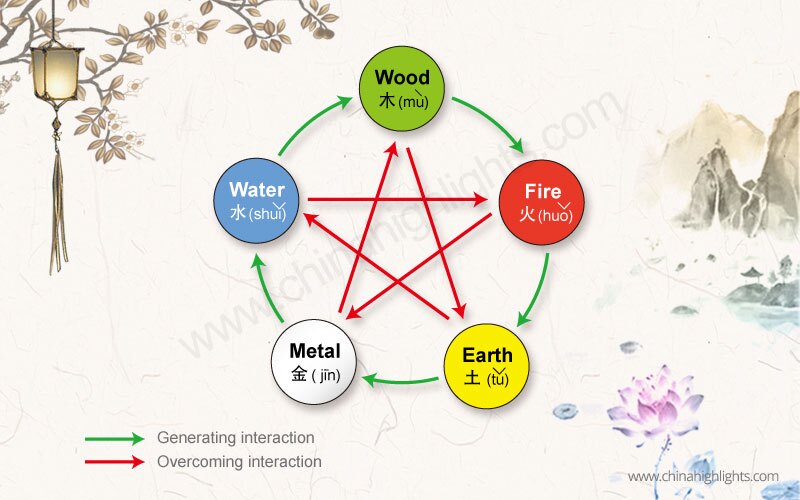 Five Elements Theory is a Chinese philosophy used to describe interactions and relationships between things. The five elements — wood, fire, earth, metal, and water — are believed to be the fundamental elements of everything in the universe between which interactions occur.

The History of Five Elements Theory

Associations of the Five Elements

Each element has its own characteristics and associations with different aspect of nature, such as direction, season, color, shape, and so on. See the tables below.

Interactions Between the Five Elements

Generating processes promote development, while overcoming processes control development. By promoting and restraining, systems are harmonized and balance is maintained.

The generating interactions of the five elements are like the conception, gestation, birth, and nurture relationship between a mother and a baby. Such element pairs are deeply attached, and together imply success and luck.

The overcoming interactions of the five elements are like the acts of hostility between two sides in a war.

Chinese astrology asserts that personality and luck are determined by both zodiac sign (element) and 12-year cycle element, while life force (or qi) is determined by birth date and time. Use the zodiac calculator to find your Chinese zodiac sign and element.

In Chinese astrology, each of the 12 Chinese zodiac signs is associated with one of the five elements, which is known as the fixed element of the sign:

The allocation is because elements and signs are associated with months of the traditional Chinese solar calendar. Each element has a season, except Earth, which marks seasonal change, and is associate with the end month of each season.

The 12-Year Cycles of the Five Elements

Each zodiac sign also has an element according to the 12-year cycle of the birth year. Each 12-year cycle starts with a year of the Rat:

The five elements combined with the 12 zodiac signs produce a sixty-year cycle: e.g. an Earth Dog recurs once every 60 years.

A person's characteristics are said to be determined both by the fixed element of their zodiac sign and the element of the 12-year cycle they were born in. E.g., a Metal Dog (born in 1970) has a personality with aspects associate with both Metal (12-year-cycle element) and Earth (fixed element).

Five Elements Theory is the most important part of Fengshui Theory. According to ancient Chinese philosophy, good fengshui will bring good luck. The qi energy of every direction is said to be ruled by one of the five elements. So aligning one's life with the qi should bring good luck and smooth all obstacles.

First you should find the fixed element (lucky element) of your sign, and then find the direction of your element's energy from the Fengshui Associations table above. Then make use of both the energy direction and the color of your lucky element to enhance your luck.

Your sign is the Tiger, so your lucky element is Wood. Wood energy is in the east, so facing east can bring you good luck. It can enhance your wealth, health and longevity. The color associated with the Wood element is green, so you can decorate the east of your house green, or put a green plant in the east, to bring yourself good luck.

According to the generating cycle of the five elements, Water generates Wood, so you can also add some Water element in the east to enhance your good luck. For example, you could put a fish tank filled with water in the east of your house.