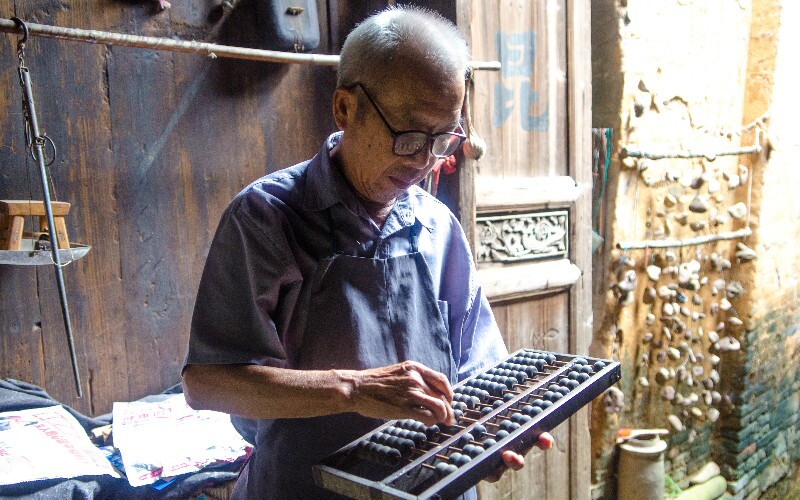 The abacus is a calculating and numerical recording tool that was once widely used in East Asia. In China, in outlying towns or more backward areas, you might see one lying around or actually used if you go into a shop. You might find older people using them. Up until calculators and teller machines became so cheap in China, they were widely used. Shop keepers used them to tally figures. I remember when I first saw them, I was kind of dumbfounded. I couldn’t figure out how they were used and felt kind of stupid because people were obviously calculating faster than I could. It wasn’t only the Chinese who used abacuses. Similar abacuses were used since ancient times in the Western world and India also. In fact, it isn’t clear where it was invented. The Chinese abacus has a long history, and using one is actually simple though it takes practice to use it proficiently.

The abacus is called “suanpan” (算盤, calculating pan) in China. It was mentioned in a 2nd century BC Chinese document, and versions may have been used for thousands of years prior. The Chinese kind has beads strung on wires or thin wood rods. There is a divider that separates the left and right strings of beads. The Chinese kind has two beads on the rods on one side and 5 beads on the rods on the other side of the divider. Chinese abacuses are designed to allow for hexadecimal computation. The Roman and Japanese versions are designed for base 10 computations. Chinese can also use their abacuses for decimal computations. These suanpans can be used for doing division, multiplication and for taking square roots and cube roots as well if the user knows the techniques.

How to Use the Chinese Abacus?

If you ever come into contact with an abacus, what do you do? You might want to learn how to use it. People say that they are simple to use. The two strung beads each represent five and the five strung beads each represent one. Each rod has a decimal value: the first, ones; the second, tens; the third, hundreds; and etc. They do not actually have to start from ones. If you are the US Treasury, you might want to start from millions and just round for smaller figures.

First, move all the beads away from the central division. If a bead is positioned next to the central division or towards it, it means it is activated and has a value. If it is resting on either side away from it, it isn’t activated. If you want to record a number, say, the number 7, simply move one of the two beads on the ones string over to touch the divider, and then move two of the ones on the ones string over to touch the divider. Voila! You have suddenly recorded the number 7! Now you can do other things, and the number 7 will still be there in case you forget the number.

To use the Chinese abacus to add a number to 7, say the number 5, is easy as well. You do some mental calculation. Mentally calculate that 7 + 5 equals 12. With this realization, we realize that 7 + 5 is obviously bigger than 10 so the number can’t be recorded on the ones string only. So you realize a bead on the second string should be activated to record the sum of the addition. So to record the number 12, you must first move the “5” bead on the units string back away from the divider. But leave the two unit beads where they are because they mean 2. Then move one of the two beads on the tens string next to the divider. Voila! With a little mental calculation, you have used the abacus to record the number 12!

As you can see, using an abacus is easy. It just takes mental calculation and your fingers to record the result. As for me, I’d rather use an electronic calculator.