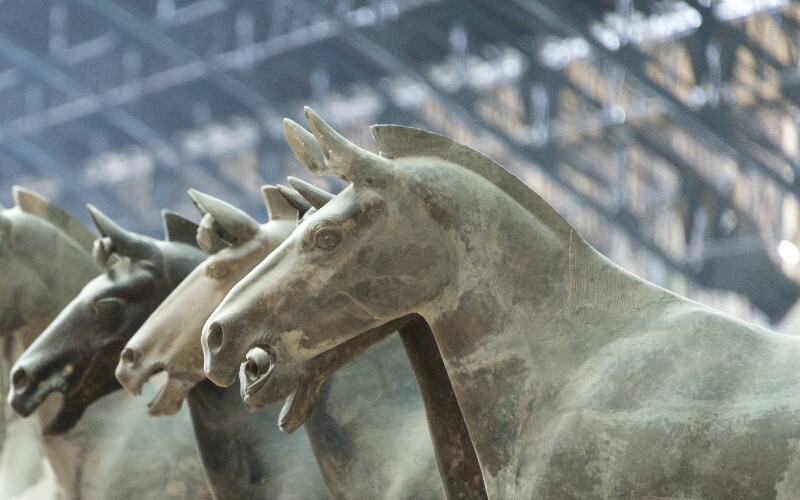 In ancient China, before the advent of mechanical power, there was no advanced transportation. The speed and endurance of horses made them a rare resource for getting around.

Horses were also indispensable in warfare, hunting, and the aristocratic pastime of polo. In ancient China, a horse and cart was equivalent to today's luxury car.

Horses have close relationships with humans. They help a lot in life and war, so horses took the fancy of people in ancient China. The Qin Shihuang Mausoleum followed this burial tradition, but replaced live horses with clay figurines. Emperor Qin Shihuang hoped that his great terracotta army would protect him in the afterlife. Read more on Chinese Death Culture.

About 600 terracotta horses have been excavated as part of the Terracotta Army. These horse statues were modeled on the domesticated war-horse. They are life-sized: about 1.7 meters (5.6 feet) in height and 2 meters (6.7 feet) in length.

The terracotta horses belonged to the cavalry. Some were allocated to cavalry soldiers, while others pulled the chariots.

The Manufacture of Terracotta Horses

The horses' heads, trunks and legs were firstly molded separately, and then assembled together with a film of clay.

Next, craftsmen carved the details, such as knotted saddlecloths, bells, manes and forelocks. Afterwards, the pieces were put into the kiln and fired. The final step was painting. See How the Terracotta Army Was Made. The two elaborately restored bronze carriages displayed in the exhibition hall were discovered in 1980, 20 meters west of the Tomb of Qin Shihuang.There are other horse statues in the Terracotta Army - bronze horses pulling the chariots. Bronze horses were rare, since bronze itself was rare and needed for weaponry, so craftsmen mostly used terracotta statues instead. Below are our two most popular tours involving the Terracotta Army:The Terracotta Warriors and Horses are rich in history and culture. You are recommended to see them with a knowledgeable guide, who can share background information with you and help avoid the crowds.