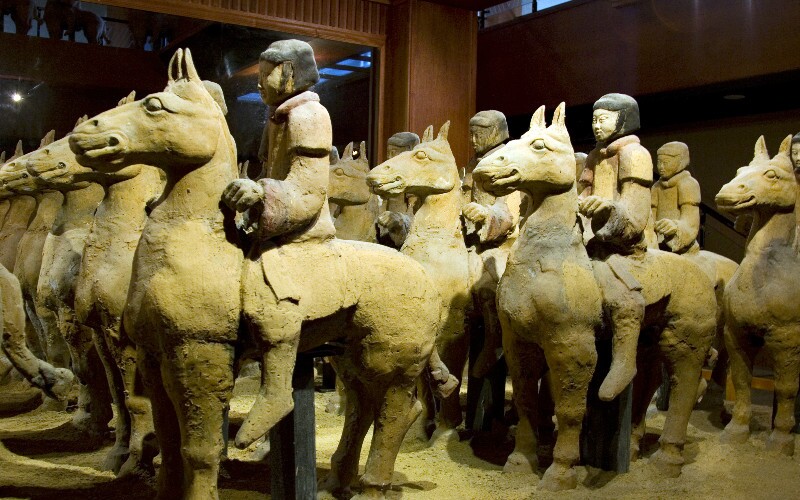 Over 720,000 laborers worked for approximately 40 years to complete it. Now, it's one of the most famous tourist attractions in China. When you visit the Terracotta Army, you will understand the greatness of the Qin Dynasty, which existed about 2,000 years ago.

246 BC: Construction of the Terracotta Army Began The Terracotta Army's construction began as a way to (spiritually) protect the tomb of China's first emperor, Qin Shi Huang.

Qin Shi Huang was the founder of China's first feudal dynasty - the Qin Dynasty (221–206 BC). He took the Qin State throne when he was 13 years old and established the Qin Dynasty at 38 years old.

Construction of most of the emperors' mausoleums in China began as soon as each emperor took the throne.

In 210 BC, Qin Shi Huang died when touring Eastern China, but the construction of his tomb continued.

Qin Shi Huang was known for his political ability and tyranny.

206 BC: Construction Was Completed

In 206 BC, the Qin Dynasty was on the verge of collapse due to a peasant rebellion. The Terracotta Army had suffered from natural disasters, such as a flood, as well as from human destruction caused by the uprising army. In 206 BC, the Qin capital was destroyed during a full-scale rebellion. Construction of the Terracotta Army was compelled to endin a hurry.

This massive project was recorded in Records of the Grand Historian by the historian Sima Qian during the Han Dynasty (206 BC – 220 AD), but the detailed information was undisclosed.

It stood untouched underground silently for the next 2,000 years until it was found again.

1974: The Terracotta Army Was First Discovered

It was discovered in 1974 to the east of Xi'an by farmers digging a well. Previously, sporadic terracotta debris had been found in that area but, this time, a terracotta statue was discovered. The village cadres reported this to the local cultural heritage department. For several years following the discovery, Chinese archaeologists uncovered the greatest archaeological site. The site was known as Pit 1.

After the excavation of Pit 1, archaeologists revealed two further pits. They were named Pit 2 and Pit 3.

Pits 2 and 3 are both smaller than Pit 1 but contain more types of terracotta warriors, horses, archers, and weapons. The Terracotta Army museum, called Emperor Qin Shi Huang's Mausoleum Site Museum, was constructed over the excavation site and was opened to the public so everyone could see the Terracotta Army. Nowadays, it's one of the must-visit attractions for all travelers to China.

The museum is located 42 kilometers (26 miles) east of Xi'an in Lintong District. Read more on How to Visit the Terracotta Army.

In 1987, UNESCO selected the Mausoleum of the First Qin Emperor (including the Terracotta Army) as a World Cultural Heritage Site. A professional archaeological team was established to protect the collection of terracotta statues. Nowadays, visitors can see the archeologists still working at the Terracotta Army site.

Emperor Qin Shi Huang's Mausoleum Site Museum was established. However, it is only a construction of what the tomb might look like. The mausoleum mound has not been opened to the public.

It consists of two parts: the Terracotta Army and the Mausoleum of the First Qin Emperorin Lishan Garden. These two places are about 1.5 kilometers apart. With your entry ticket, you can visit them in any order and there are more than 30 free shuttle buses between them.

The archaeological excavation and protection of the Terracotta Army is still active, and more and more tourists come to see them.

At the same time, vibrant cultural exchanges have been carried out. Lots of overseas exhibitions have been held and more and more people know about the Terracotta Army.

Tour the Terracotta Army Site with Us The Terracotta Warriors and Horses are rich in history and culture. It is advisable to travel with a knowledgeable guide, who can share the background information with you and help you avoid the crowds.

Here are the most popular tours including the Terracotta Army:

See more of our Xi'an Tours. Our tours are customizable - tell us your interests and requirements and we will help you to tailor-make your Xi'an tour.