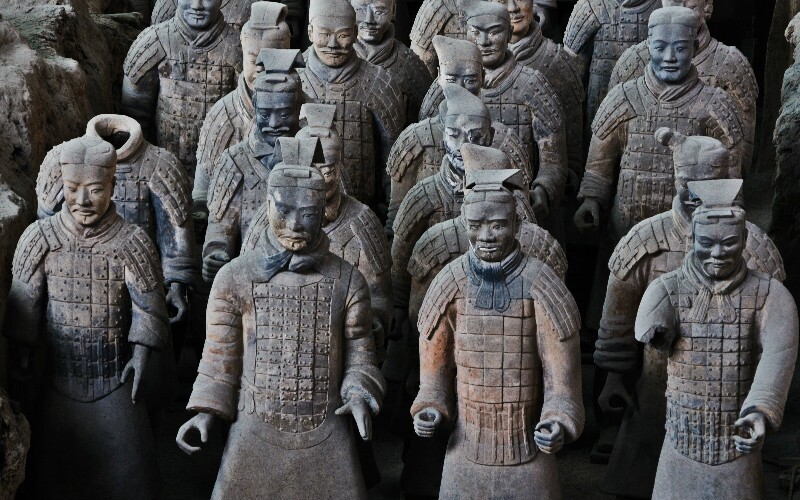 The Mausoleum of Qin Shihuang

The Mausoleum of Qin Shihuang is about 1.6 kilometres (1 mile) from the Terrracotta Warriors Museum. It is an artificial hill constructed as a part of a 98-square-kilometer (38-square-mile) necropolis complex that was built by Qin Shihuang and his court.

The Mausoleum of Qin Shihuang included the large mound seen in the background.

The First Emperor of Imperial China

This authoritarian emperor, Qin Shihuang (~259 to 210 BC) left the world with a legacy of great achievements. The mysterious royal mausoleum and necropolis stands out as a wonder of his imperial reign.

Qin Shihuang's necropolis included about 8,000 of these army statues that have been discovered to date.

Recently, archeologists have found a huge palatial burial chamber underneath the mound that they think is the actual tomb. This isn't yet certain however because the mound hasn't been officially excavated

Modern surveys of the site show that the mausoleum is divided into an inner sanctuary and an outer city.

It stands at the foot of Lishan. It is about 30 km east of Xi'an. The big tomb mound and what is in it lies on the Lishan mountains and offers a unique landscape for sightseeing. Trees and bushes cover the mound.

There is a model of the tomb that was constructed there, but few tourists find the mock-up interesting. The only "Tomb of the First Emperor" that tourists can see is a mock-up.

Around the mausoleum, there are many accompanying tombs scattered over a 56 square km tomb area. In addition to the discovered vaults seen in the famous museum of the Terracotta Warriors and Bronze Horses, some more vaults have been discovered recently that contain other artifacts. As time goes by, archeologists are sure to discover more treasures.

China Highlights private tour customers at the Terracotta Army Museum can access archeological discoveries that are not seen by the large crowds.

For many tourists, a trip to China isn't complete without a visit to the the Terracotta Army. Here are our more popular tours to explore this ancient wonder:

We'll modify these to tailor-make your personal tour to meet your requirements.

To be better prepared for a visit — read An Insider's Guide to the Terracotta Army Museum.