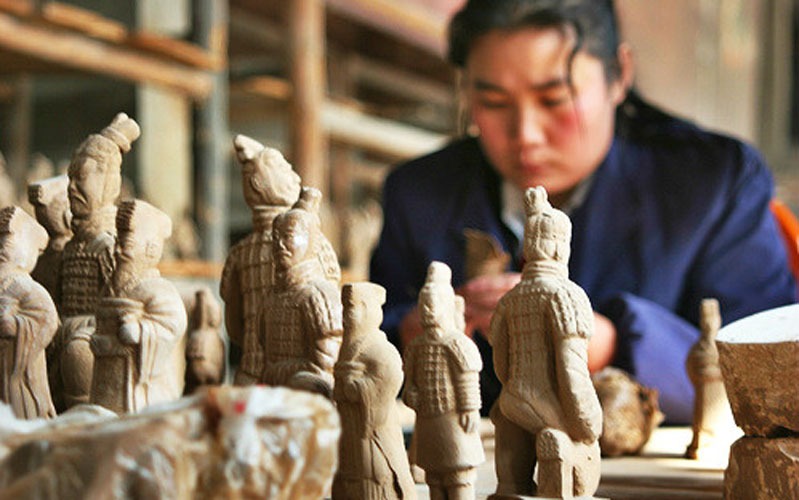 How the Terracotta Army Was Made and Its Composition The terracotta warriors and horses were all built by hand, without advanced tools. The average height of the warriors is 1.80 meters, and each warrior weighs about 160 kg.

More than 700,000 artisans and laborers participated in the construction of the Terracotta Army and the Qin Shihuang Tomb Complex. This massive building project took an estimated 40 years to complete.

The Main Material Used for the Terracotta Army

The principle constituent of Terracotta Army soldiers was yellow clay. According to technical analysis, all the Terracotta Army materials were locally sourced. All the kilns for firing the terracotta statues were distributed within a circle with radius of 10 kilometers.

Research shows that the terracotta figures were created in separate pieces and then assembled together. Below are the 6 main steps in the manufacture of Terracotta Warriors.

3. Assembly: putting the parts together

5. Firing: in a kiln after being air-dried

6. Painting: the statues were all colorful at first but colors faded after more than 2,000 years… read more on The Original Colors of the Terracotta Army How the Terracotta Horses Were Made

The steps for manufacturing the terracotta horses were similar to those for the warriors. The horses' heads, bodies, legs and tails were molded separately, and then glued together with a film of clay.

The horses were also painted with pigments, after firing.

Statue-Types in the Terracotta Army The soldiers include infantry, cavalry and chariot soldiers. They were equipped with different military gear, according to the combat normally engaged in.

The average height of the warriors is 1.80 meters (about 5 feet 11 inches) and the tallest is 1.90 meters (about 6 feet 3 inches). Each warrior's features–body, face, eyes and age–are unique. Many of the terracotta warriors as yet unearthed are infantry. They wear battle robes or armor. As the main military force, they are spread throughout the whole formation.

Infantry in battle robes are flexible and usually stand outside the formation; infantry in armor stand in formation.

The kneeling terracotta archers were excavated from the east of Pit 2. They wear robes inside and armor outside, and their hair has a bun on the left side of the head. The left leg was bent and the right one touched the ground.

Standing archers were also excavated from Pit 2. They wear robes and hold a crossbow in hand. Carvings on the standing archers are simpler than those on the kneeling archers. In addition to infantry, there are a few unearthed cavalry. Each cavalry soldier stands in front of his warhorse. The cavalry's attire was obviously different to the infantry and chariot soldiers'.

They dressed in round hats, tight clothing, trousers and short boots. Such costumes facilitated cavalry soldiers acting quickly and easily.

Normally, in addition to the chariot driver, there are two chariot soldiers, one on the left and the other on the right of the chariot.

They wear armor and hold long weapons such as a lance, halberd or dagger-axe. They are the main combat force for chariots. Sometimes, there is a military officer on the chariot serving as commander.

Military officers were divided into three ranks: junior, intermediate and high. The regular military officer's crown and armor are different to the high-ranking general's.

Statues of military officers are more exquisite than those of soldiers. Officers' statues have crowns and their armor has several different styles.

The senior military officers are also known as generals. There are very few of them in the whole army.

At the southeast of the Qin Shihuang Tomb site, there's a pit of unearthed acrobatics figurines, about 800 square meters in area.

Several figurines have been repaired. They all have unusual postures and expressions. They offer a glimpse into the world of entertainment more than 2,000 years ago. Lots of terracotta horses appear in ancient cavalry formation. Some are pulling chariots, while others serve as mounts for cavalry soldiers.

Two restored bronze carriages are also displayed in the exhibition hall. The carriages were driven by four horses each, and were mainly made of bronze. The Terracotta Warriors and Horses are rich in history and culture. You are recommended to visit the site with a professional guide. A private tour with a private guide and driver will provide you with a hassle-free tour in Xi'an.

Among our tours including the Terracotta Army, the following two are the most popular:

If the above tours are not suitable for you, we have more Xi'an tours. Any of our tours can be adapted and tailor-made to suit your requirements and budget. Please feel free to contact us.