This is the most popular park in Changsha. It is quite big and is the site of an academy that is famous in Chinese history. You'll enjoy the hour walk up the hill, the city skyline, and the woods and streams. In addition to the beautiful natural scenery, the mountain is dotted with historic sites such as Yuelu Academy, Lushan Temple, Yunlu Palace, Aiwan Pavilion, and the Monument to King Yu. Yuelu Academy is about 1,000 years old, and it was one of the first four ancient academies in China, providing unique higher education for the imperial exams. Now it is a museum, and there is a museum building that teaches on its history and the history of education in China. The simple pavilion seen here was originally built near the beginning of the Qing Dynasty about 250 years ago. The original name of the Aiwan Pavilion was Hongye Pavilion. It faces east and is surrounded by hills on the other three sides.

The Lushan Temple was originally built during the Western Jin Dynasty era about 1,700 year ago. It was thought of as one of the most sacred temples of Hunan. 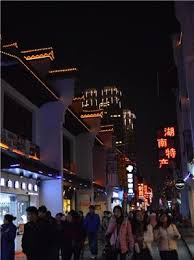 These three sites are the three most popular tourist attractions after Mount Yuelu. They are all within 8km (5 miles) of Mount Yuelu in the city. This makes visiting all these places easy while staying in Changsha.

Huangxing Road (黄兴路) Pedestrian Street: The highlights are little Chinese shops that give economical prices and a wide selection and little restaurants and snack stands along it.

Orange Island (橘子洲, Júzǐzhōu): This narrow island in the middle of Changsha is a park. It is in the Xiangjiang River about half a mile from Mount Yuelu. There are thousands of fruit trees, gardens, sightseeing paths, frequent grand firework displays, and a big statue of Mao's head.

Hunan Provincial Museum is one of the foreign tourists favorites because of the quality of the exhibits. It is about two miles east of Yuelu Park.

Yuelu is popular. It is crowded by locals and students going for morning and evening walks. On sunny days, it might actually be less crowded during the heat of the day around noon and early afternoon when most Chinese nap.

Schools and universities let out for summer vacation in July. This site is popular with students, educators, and parents who want to teach their kids about education and China's history. So expect an influx of them to see the area until August.

It is best to avoid Friday and Saturday and Sunday during high season when weekend tourists crowd in. Also avoid coming during Chinese public holidays. Personalize your tour: What would you like to do?>>