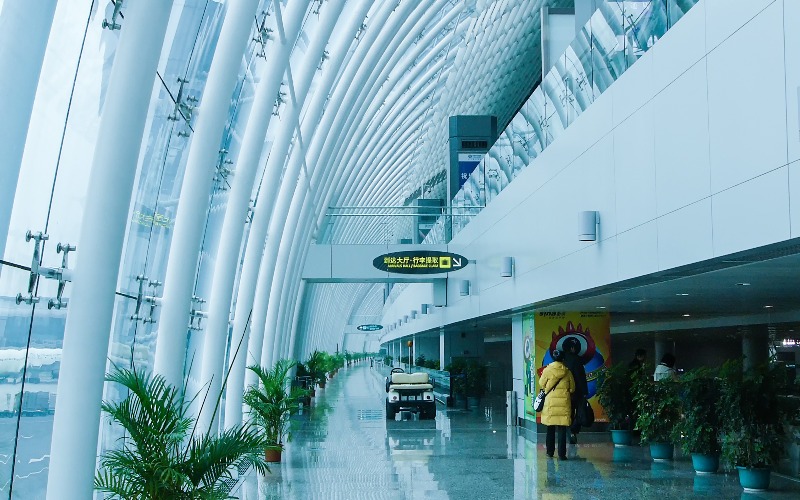 Guangzhou Baiyun International Airport, which is located to the north of Guangzhou, is one of China's busiest major airports with large passenger capacity and cargo turnover. The Baiyun International Airport opened 90-odd domestic air routes and 23 international air routes with a total capacity of 12.57 million passengers in 1997, and cargo turnover reached 351,800 tons in 1997. There are over 110,000 flights annually. The current single 11,089 foot long runway has almost outlived its usefulness.

The Shortest Driving Distance & Hours from Guangzhou Airport to...

The Following data show the shortest driving distance and hours from Baiyun Airport (under the condition of no traffic jam).

There are public buses available to transfer passengers from the airport to different destinations in the city, and its nearby cities. Ground transportation information booth is located in the arrivals hall.

Taxi rental services are available within the terminal hall, 24 hours a day, and passengers can receive transportation to various destinations in the city. Taxicabs are positioned outside the Main Terminal Hall in the pick-up and drop-off zones.

The Guangzhou city government decided to move the airport, one of China's busiest, away from the crowded urban area as rising cargo and passenger volumes are causing increasing congestion. The PRC Government has approved the project in the document that titled "the Approval of Moving and Construction of Guangzhou Baiyun International Airport by the state council and the State Military Commission". The new airport project in Guangzhou commenced construction in the second half of 1999, with completion targeted for early 2003. Upon completion, the new airport will replace the Guangzhou Baiyun International Airport as the main hub. Guangzhou New Baiyun International Airport is located at the junction of the North Ren He County of Baiyun District and the East Xin Hua County of Hua Du, 28 kilometers away from downtown Guangzhou, and 17 kilometers from the current Baiyun International Airport. At an estimated cost of US$2.3 billion, the first phase of construction is scheduled to be operational by 2002. When completed in 2005, the three-runway airport will have a cargo capacity of 2.5 million tons and a passenger capacity of 80 million a year. Two runways are being constructed in the first phase -- the west runway is 3600 meters in length and 45 meters in width, while the east runway is 3800 meters and 45 meters respectively. The vertical distance between the two runways is 2200 meters. The two long-distance parallel runways will be equipped with precise instrument landing system and flying assistant lighting system. The third paralleled runway is designed 680 meters south of the east one, with a length of 3200 meters and a width of 45 meters.