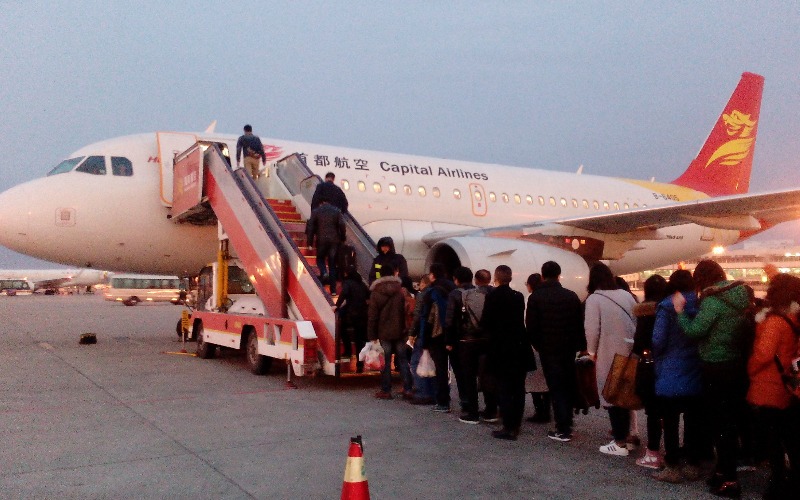 Xi'an Xianyang International Airport terminal expansion project began in 2001. The airport is located in the outskirts of Xi'an City, Shaanxi and was opened in 1991. The rapid growth in air traffic in north western China has led it to require further investment. Xi’an Xianyang airport will see its airport terminal building expanded with new investment buying boarding bridges, air conditioning equipment, and other passenger terminal building equipment.

The rationale of the project is to service the extremely rapid growth in air traffic (both passengers and cargoes) within north western China. This follows the rapid economic growth seen after the early 1980s economic liberalization reforms. During the 1980s, air passenger numbers grew at a rate of 18% a year while the figure for cargoes was 15%. The 1990s saw an even higher rate of growth, which continued despite the economic problems of East Asia after 1997.

Xi'an Xianyang International Airport itself has seen its passenger numbers mount with alacrity. In 1998, it saw more than 2.8 million people use the airport. This was well ahead of the predictions for 2000 of 2.4 million passengers.

In addition to the need for the airport to expand simply to accommodate its passenger numbers, it also holds a wider economic importance. The existence of a large airport is widely viewed as being essential to the general growth of north western China’s economy (and therefore the Chinese economy as a whole). North West China has traditionally had a lower growth rate than the coastal regions.

The Xi'an Xianyang International Airport is also important because it is a potential airport hub for western China. At present much Chinese air travel is from city to city with few "feeder" airports. The expanded airport will be better able to deal with regional flights. Major steps to a spoke and hub system are an objective of the five year plan.The project is designed to improve the equipment and functions of the Airport by expanding the existing terminal building for passengers (about 50,000 square meters) and upgrading apron/utility facilities.

XI’AN XIANYANG AIRPORT FINANCINGThe project has benefited from a loan from the Japan Bank for International Co-operation. The loan was used to procure boarding bridges, air conditioning equipment, and other passenger terminal building equipment that was needed in the expansion of the airport.

XI’AN XIANYANG AIRPORT LEAD CONTRACTORSBids were invited from firms to supply various items of equipment during the course of 2001. For instance, in April 2001, the authorities asked for bids for baggage handling systems at the airport. The airport is now under construction, but it is unknown when the expansion is expected to reach completion.

In the cases of equipment, there is a set percentage for the origin of parts involved in, for example, the baggage handling systems. Thus, the contract can stipulate that 0% of the parts should come from outside Japan. The bidding process is therefore being carried out with some emphasis on Japanese companies or their local Chinese partners benefiting from the business.

The Shortest Driving Distance & Hours from Xi'an Airport to...

The Following data show the shortest driving distance and hours from Xianyang Airport (under the condition of no traffic jam).

The Xian Xianyang International Airport (西安咸阳国际机场) is 47 kilometers northwest of central Xian and about 13 kilometers from Xianyang. For quick travel between the Xian International Airport and the Xian Train Station or the Bell Tower or many other places, it might be best just to take the shuttle buses that run regularly and frequently and are a lot less expensive. There are 7 shuttle bus routes. Airport taxis might be a little unreliable. Drivers may issue fake money, drive too far or try to pull other scams. By taking a bus, you can avoid this. For the shuttle buses, be aware that the schedules can change. The 7 shuttle bus routes run frequently and go to important places.

Operates between Stop T1 at the airport and the Xian Melody Hotel between about 6 am to 8 pm. The ticket fare is 25 RMB. The travel time is about an hour. The buses leave about every half hour, but they usually leave when they fill up. If there is an incoming flight, a bus is scheduled to meet it.

Operates hourly between Stop T2 at the airport and the Big Wild Goose Pagoda from about 10 am to 4 pm. The ticket fare is 25 RMB. At the pagoda, the bus stops at the north square at the Tang Dynasty Art Garden Hotel.

Operates hourly between Stop T2 at the airport and Xishaomen between about 6 am and 6:30 pm. The ticket fare is 25 RMB. In Xishaomen, the bus stops at the airline ticket hall.

Operates more or less every two hours unless there are a lot of passengers. For the 2011 International Horticultural Exposition in Xian, there will probably be a lot more buses. The buses go between Stop T2 at the airport and the Kempinski Hotel between about 8:30 am and 4:30 pm. They go the other direction between 8 am and 6 pm. The ticket fare is 25 RMB. In Xishaomen, the bus stops at the airline ticket hall.