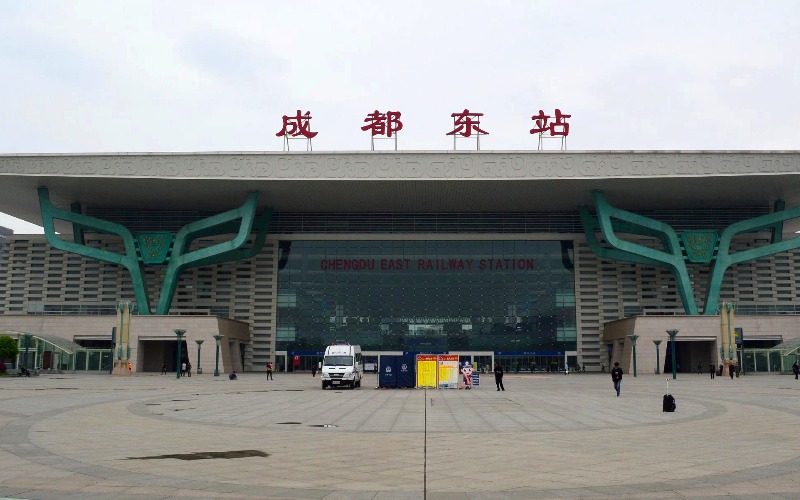 Construction of the station began in 2008 and it was put into use after May 8th in 2011. Chengdu East Railway Station (成都东站) is one of the biggest and most important transportation hubs in southwest China. The whole station consists of two squares, East Square and West Square, and a station building of 5 levels. Station building, 14 platforms and 26 rail canals take up a land of 108,000m2. Inside the station building, there are, from top down, waiting level on 3F, platform level on 2F, departure level on 1F and two levels underground.

Chengdu East Railway Station operates trains bounding southeast China and inside Sichuan Province, with a few railways heading north. Seeing that the station is far away from downtown Chengdu, we strongly suggest you get to the station at least 2 hours ahead of your departure time.

7 ticket offices can be found on 1F, by both sides of the hall. Business hour is 24/7. There are about 70 ticket counters and 10 automatic machines for service. You will need your passport and booking number to collect tickets. Automatic ticketing machines provide self ticketing services for Chinese ID card holders.

You can pick up, change or cancel train tickets at any counter. Tickets of trains that do not depart from Chengdu can also be cancelled or endorsed at this station with a certain amount of cost depending on the day of action.

Chengdu East Railway Station operates trains bounding southeast China and inside Sichuan Province, with a few railways heading north. High speed rails run between Chengdu and several cities in Sichuan Province, including some inter-city trains to Mianyang, Jiangyou and Emeishan. Non-high-speed trains are mostly long distance, bounding to Wuchang in Hubei, Beijing, Changsha in Hunan, Nanning and Guilin in Guangxi, Nanchang in Jiangxi and etc. Chengdu East Railway Station is also the terminus for Shanghai-Chengdu Railway and Guangzhou-Chengdu Railway (K-trains). There’s no train to or from Lhasa at this station.

Z-trains: Beijing and Guangzhou Note: Tickets to Lhasa (with origin from Chengdu Railway Station) can be purchased at this station, but you shall make sure you have a Tibet Travel Permit beforehand and booking in advance for 20 days is smarter.

Every platform has its own exit and passengers shall get out through the exit to the underground arrival level. To catch a metro, you can find the metro entrance on -2F. When you get onto the ground floor, you can take a bus or taxi.

To Other Railway Stations