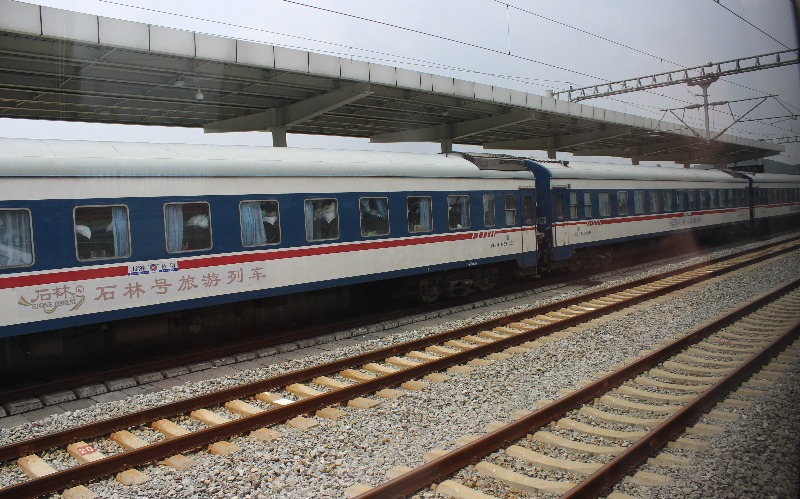 Known as the transport center between South China and North China, Hengyang Railway Station mainly deals with the ordinary trains operating along the Beijing–Guangzhou Railway and Hunan–Guangxi Railway lines, where the main intermediate stops are Changsha, Shaoyang, and Shenzhen. Shanghai is the most popular stop on the east–west line. Tourist trains to Zhangjiajie Scenic Area and Hengshan Mountain Scenic Area are also available.

Below are examples of major train services running from Hengyang Railway Station to the other major railway stations in China.

Taxis are considered to be the most convenient way of traveling in Hengyang, and the general rate is 5 RMB for the first 2 kilometers (1.2 miles) and 2 RMB for every additional kilometer between 6:00am and 10:00pm, while 2.4 RMB for every additional kilometer will be charged between 10:00pm and 6:00am. A 1.5 RMB fuel surcharge will also be charged by the driver, and it is highly recommended to bargain with the driver before getting into the taxi, or insist on meter use.

Transport to the Other Railway Stations in Hengyang

Located in Yangfeng District, Hengyang West Railway Station can be reached directly by buses 1, 10, 31, and K1.

Changsha Huanghua International Airport (Huanghua Town, Changsha Prefecture) is about 190 kilometers (118 miles) from Hengyang Railway Station, and getting there takes about two hours and 45 minutes . It is highly recommended to take bus K5 from the station to Hengyang East Railway Station, then he G1002 train to Changsha South Railway Station, before taking an airport bus to the airport from the square in front.

The ticket vendors are available in the ticket halls of Hengyang Railway Station, and both online ticket booking and telephone booking are highly recommended to save time joining a queue.

With an area of 10,478 square meters (112,000 square feet), Hengyang Railway Station is a comprehensive station with passenger transport, goods transport, and tourist services combined perfectly as one, and is also an important passenger and goods distributing center in Hunan Province.

A square is situated in front of Hengyang Railway Station, where taxis and buses line up, making it convenient to transfer from trains to the other means of transport.