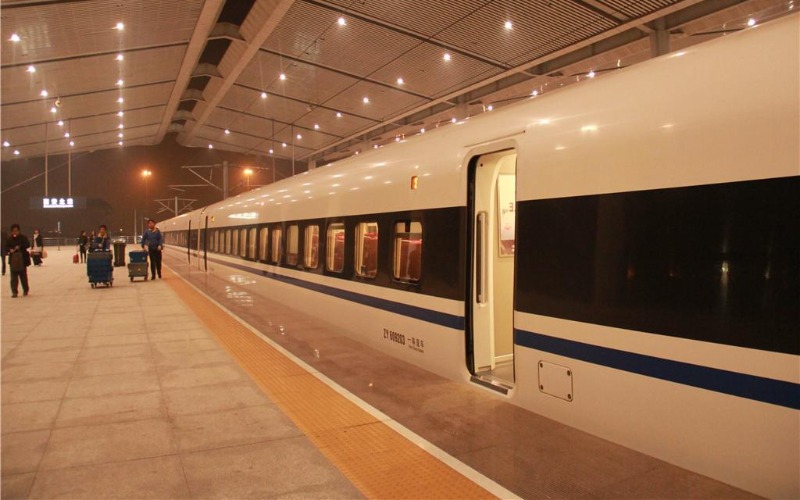 Xi'an North Railway Station is only for high-speed trains. It is the city's main bullet train station, and since it is linked to the metro Line 2 that goes directly to the Bell Tower and other local highlights, you can use this station to fairly quickly and efficiently visit Xi'an's highlights from most major cities in China.

Conventional trains are available from Xi'an Station. They are cheaper, but they may take two or three times longer.

Xi'an North opened in 2011, and in terms of number of platforms, it is one of China's largest bullet train stations. The modern design helps make travel easier. There are two squares (north and south), and the station building is between them.

For luggage portage, go to the entrance of the first or second floor. The porters can bring the luggage to the train for you (5 RMB piece of luggage and 50 RMB per cart).

See more about How to Get On/Off a Train and 7 Things to Know Before Riding a Train.

Street map of Xi'an North's location. Click to enlarge it.

The Xi'an North Railway Station subway station is called Bei Ke Zhan 北客站 on Line 2. Trains run from 06:00 to 22:55. The system is small, but it can bring you to the downtown area (near the Bell Tower 钟楼). Ticket prices are 3 - 4 RMB.

If you are traveling with big luggage, this option is not recommended, especially when the trains are crowded during morning, noon, and evening rush hours.

Xi'an Xianyang International Airport has no subway yet. Taxi or bus is the best option unless you want to go by private transport.

To the Terracotta Warriors Museum

The Terracotta Warriors can be reached by riding the subway and bus:

Taxis are not recommended due to the many scams, but if you can find a reliable one the price should be about 300 yuan. A tour with private transport may be your best option. If you are looking for tour planning ideas, see below.

Ticket windows are on both sides of the entrance of 1F. They are open from 05:30 to 24:00. Ticket windows for ticket changes and refunds are located inside the office on the east side.

The are four train stations in the city, so make sure your ticket is for the station you want to leave from. Check the name carefully.

You could book tickets in the station, at other train stations, or at many ticket windows in the city. You can also book online with our China train booking service. See How to Buy Tickets in China>>

About 10,000 satisfied customers each year book tickets with our service.

See major tourist sights on the Beijing to Xi'an Train Travel Route. Or see our most popular tours below for inspiration:

You can use the bullet trains to quickly see highlights of China's top tourist areas, and our private transport and guide will let you see and do more in a relaxed and comfortable way. If you want to adjust an itinerary, we can tailor-make it for you.