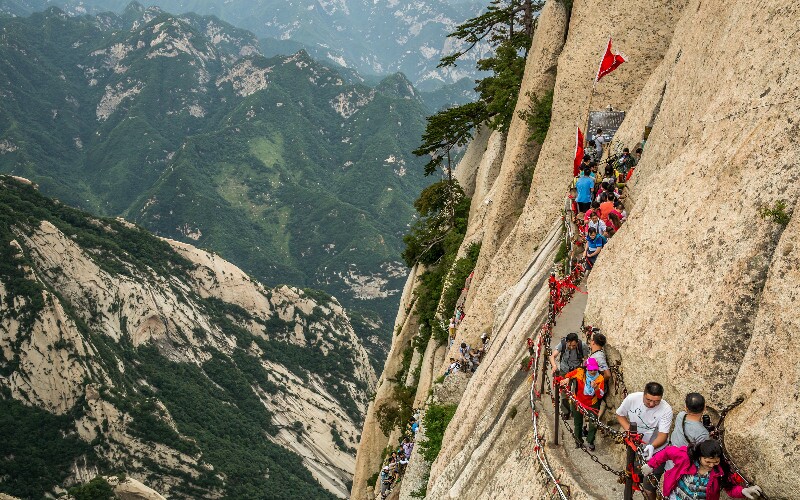 Mount Hua is one of the five sacred Taoist mountains in China. It is located 120 kilometers east of Xi'an, about 1½ hours from the city center.

Hua Shan boasts a lot of religious sites: Taoist temples, pavilions, and engraved scriptures are scattered all over the mountain.

Hua Mountain is well-known for its sheer cliffs and plunging ravines. It is known as "the most precipitous mountain under heaven" and is probably the most dangerous mountain in the world frequented by hikers.

The Route to Climb

North Peak, the lowest of the five, is the starting point. There are three ways to ascend: the six kilometer winding track from Huashan village, the cable car, or the path beneath it.

Next on the route is Jade Maiden Peak. Legend has it that a jade maiden was once seen riding a white horse among the mountains, hence the name. Then hikers can choose to take a left to Sunrise Peak, a fine place to enjoy the sunrise (which would involve climbing the mountain in the dark as there is nowhere to stay on the mountain).

Alternatively visitors can take a right to Lotus Peak.

Finally there is a gondola which takes visitors across a steep valley to Landing Wild Goose Peak, the highest among the five summits. The path to the summit includes a foot-wide plank walkway fixed to a sheer rock face with only a chain along the rock for support.

The route continues with footholds in the rock and a chain for holding. This is followed by a vertical ladder in a cleft in the rock. Finally there are steep stone steps.

The South Peak is not for the faint-hearted and is particularly dangerous in winter. However, the views are breathtaking. The climb to its summit makes it clear how "the impenetrable mountain" kept away attackers over the centuries.

Mt Hua Adventure and Xi'an Essence Tour 4-day It includes must-see attractions of Xi'an and one day to Huashan, all in 4 days. View more