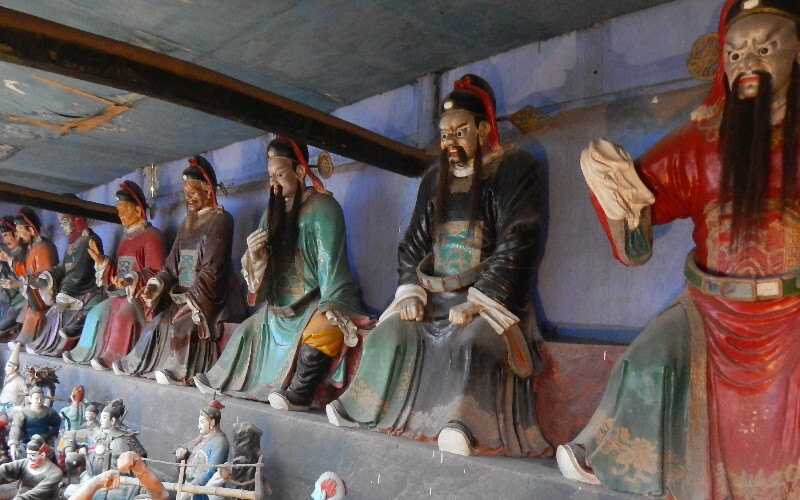 A popular stop on Yangtze River cruises has been the Fengdu “Ghost City.” It used to be a burial area with scores of temples and shrines and a small ancient town. Due to the construction of the 3 Gorges Dam, the ghostly city is underwater. However, a hill and dozens of temples remain in the big artificial lake behind the dam. So that part can still be visited. It is a large burial and temple area. The area above the “Door of Hell” remains. It is interesting that Chinese have traditional conceptions of hell that are somewhat similar to Western ideas. At the site, people can see statues and frescoes about hell with brightly painted images of demons and etcetera.

Fengdu is where the devil lives, according to Chinese legend. They say that spirits go to heaven, and evil goes to Fengdu. The town was overlooked by Ming Shan Hill that was said to be the home of Tianzi, the King of the Dead. A temple on the top of the hill is dedicated to Tianzi. The whole place had an eerie feel to it with deserted streets, tower blocks, and empty shops before the lake rose. Now the city is underwater.

However, Ming Shan Hill is now an island. There are a lot of tombs and grave sites there because Fengdu was a large burial ground. It was and may still be one of the major Taoist burial grounds, where the people who don’t achieve immortality are buried. There are also scores of temples and shrines. There is a temple on top. To get to the temple, there is path that takes about 15 minutes to climb. There is also a cable car. Around the temple are brightly painted statues that depict visions of hell: demons eating people, people suffering. The demons have interesting characteristics and colors. There are three toed demons and blue demons, etc.

One of the fun activities at the temple is physical tests such as running up stairs while holding your breath or crossing a bridge in the fewest steps. These physical tests, though they might be considered fun now, actually stem from a Taoist tradition about how to enter the area in peculiar physical ways that would make people have good Taoist fortune.

Location: Fengdu Ghost Temple is about 160 kilometers or 100 miles east of Chongqing in the Three Gorges Lake. It is usually the first location that a cruise ship going east from Chongqing will come to unless it stops at the ancient city of Fuling that is about 25 kilometers west on the river.

Like other old cities in the area along the bank of the Yangtze, the history of Fengdu goes back thousands of years. It is said that the city got its reputation as a place for dead people and the king of hell during the Tang Dynasty (618-907 AD). It is said that two men named Yin and Wang arrived at the place in the time of the Han Dynasty (206 BC to 220 BC). They became Taoist recluses, and it is said that they became immortals. “YinWang” means “King of Hell” or “King of Darkness.” Somehow, during the Tang Dynasty, people started to say that the king of hell lived there. It became one of the famous Taoist burial grounds in China. There is a temple complex on the summit and below. It contains some construction or carvings dating back to the Tang Dynasty.

There was a town on the shore of the river before the dam was built with 50,000 people. The construction of the dam has made the site an even more popular tourist site than it was before, perhaps because travel to the site is now easier.