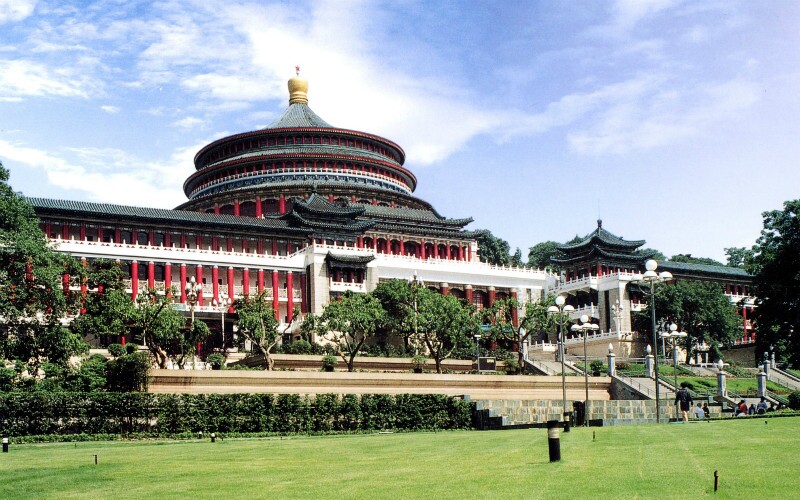 Great Hall of the People

Chongqing People's Hall was built between 1951 and 1954. It was called the Sino-Soviet Building. It is a big building. Its dome resembles that of the Temple of Heaven in Beijing. It has a 4,000 seat auditorium. It is still considered one of the symbols of Chongqing. In front of it is a large square decorated with fountains and lights. It is considered by some foreign architects as one of China’s best buildings that were constructed between 1949 and the late 1980s. It has a big red-tiered dome that was shaped and colored like that on the Temple of Heaven in Beijing. The dome is 55 meters high. There is a main hall that has the dome, a south wing, a north wing and an east wing.

There is a square in front of the building that was built in 1997. The ground of the square is paved with smooth stone tiles. There is a stage for performances and official functions. At times, there is a spectacular light show put on with some computer controlled lighting, and then the main building, the decorations in the square, and fountains of water are brilliantly and colorfully light. The hall was designed by Zhang Jiade incorporating Ming (1368 AD – 1644) and Qing Dynasty (1644-1912) style elements. It was constructed between 1951 and 1954. The building originally had the main hall, the north wing, and the south wing. In 1986, the east wing was added. It was originally called the Sino-Soviet Building, but in 1955, its name was changed to the present name. In 1997, the plaza in front was constructed. The spectacular light shows and entertainments are popular in the city. You may sometimes see thousands of people dancing in the evening. In the morning, people come to exercise or sit outside.

Nearby in the southern part of the city is the Chongqing Zoo where you can see rare species of Asian animals like pandas and South China Tigers and common animals from other places like African giraffes. There are more than 200 species of animals there and amusement places.