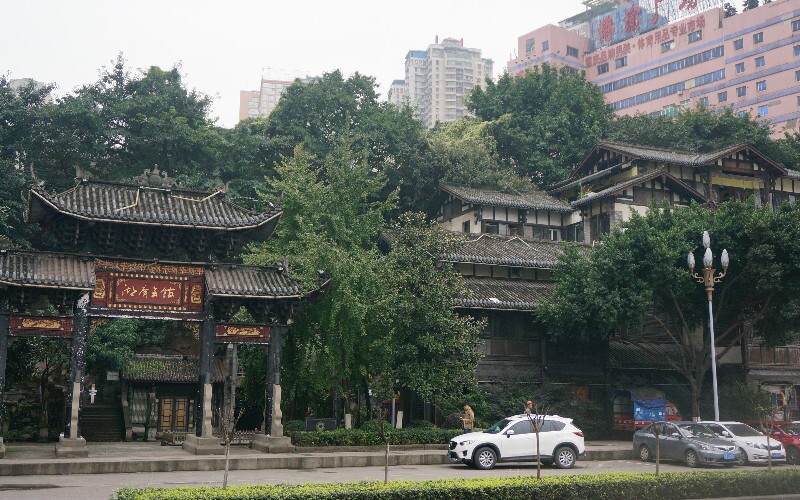 The Huguang Guild Hall is an old complex of buildings that was a cultural, business and social center for more than 200 years. When people came from other provinces to settle in the region during the Qing Dynasty, they built guild halls. The Huguang Hall was built for people from Hubei, Guangdong, Guangxi and Hunan. The complex was opened for tourists after renovation in 2005. Many theatres, opera stages and shrines can be seen. There is a museum and shops for handicrafts. There are performances of Sichuan Opera “Magical Face Changing” in which the actors change the masks that they are wearing by slight of hand or with a wave of their hands. This old hall complex has been refurbished and renovated, and it may be an interesting place to visit to see the architecture, watch performances, eat and shop. It is a complex of halls, meeting rooms, courtyards, theaters, gardens and rooms. This complex of rooms and halls served for business, entertainment, religious and social activity and as a meeting place for people from the provinces in the southeast and east. So various buildings have identifying names like Guangdong Hall for people from Guangdong Province in the far southeast corner of the China mainland where Hong Kong is now. Other halls are called Jiangnan Hall (江南会馆) that means “south of the river” for people from the area south of the Yangtze River; Lianghu Hall (两湖会馆) that means “the two Hu provinces” meaning Hunan Province and Hubei Province; and the Jiangxi Hall (江西会馆) for people from Jiangxi Province. There is a temple there called Yuwanggong where people used to pray for harvests. There is also a city gate outside the complex called Dong Shuimen that is one of Chongqing’s best preserved city gates.

Location:  4 East Shuimen Street (东水门正街 East Water Gate Street) The Dong Shuimen (“Eastern Water Gate”) is one of Chongqing’s best preserved city gates. It is just outside the guild hall complex. East Shuimen Street is in the far eastern part of the old city area that is now called the Yuzhong District. It is near the river and is next to a major avenue called Changjiang Binjiang Road that goes follows the river’s bank.

A building was first built in 1759 during the reign of Emperor Qianlong in the ancient city area near an eastern gate of the city along the Yangtze River. It was damaged by fire, and a complex grew that was renovated and expanded many times. Settlers from the east and south of China and their descendents wanted to meet there. They moved to the area because the Qing Dynasty rulers wanted Sichuan settled. Chongqing was then a part of Sichuan.

Around the city area, there are several tour highlights. For more shopping, “Face Changing” Sichuan Opera, and restaurants, there is a small pedestrian area composed of two city streets and alleys called Ciqikou to the northwest along the Jialing River. Other nearby attractions include the Three Gorges Museum, the Great Hall of the People, and Chongqing Zoo.